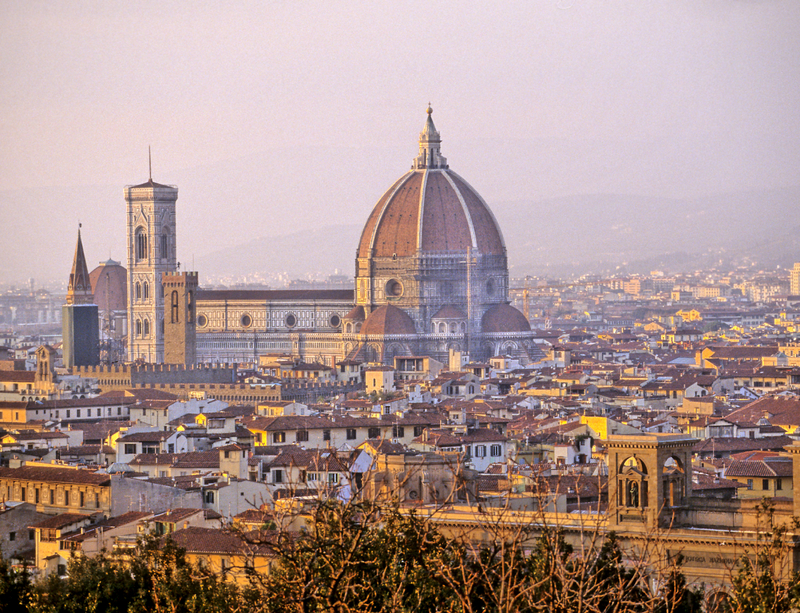 To be in Florence is to experience a magical city that is as ancient as it is modern. Around the block from designer boutiques, visitors can see the birthplace of Dante Alighieri. Then, after eating a delicious gelato, one can stroll the Ponte Vecchio and imagine all the things that have transpired in the city so famous for its art and beauty. The historic center of Florence is perfect for walking on foot, whether for sightseeing or just being in one of the most marvelous places on Earth.

Florence was built on the site of an ancient Etruscan settlement and over the centuries has become the symbol of the Renaissance. The city rose to cultural and economic power during the 15th and 16th centuries, during the rule of the Medici. The historic center of Florence was declared a World Heritage Site in 1982 by UNESCO and attracts millions of tourists each year, all eager to experience the glory that is Firenze.

What to see in the historic center of Florence?

The impact of Florence on the world is vast and its influence on music, art, cuisine, and fashion cannot be ignored. The historic center of the town has several beautiful piazzas and Renaissance-style palaces, as well as numerous churches ready to be explored. Florence also boasts an extensive collection of art, most of which is showcased at the Pitti Palace and the Uffizi Gallery.

The Cathedral of Florence

Florence’s Cathedral, or Duomo, is the beautiful Basilica of Santa Maria del Fiore, which towers, larger than life, over the piazza where it stands.  Designed by Arnolfo di Cambio in classic Gothic style, construction began in 1296 and was completed in 1436. The large dome of the Cathedral was designed by the famed Filippo Brunelleschi.

The façade of the Basilica has polychrome marble panels in different shades of pink and green, which are bordered with white, and has beautiful 19th-century gothic revival accents. Up close, the beauty of this seemingly delicate exterior decoration almost does not seem real.

Florence’s cathedral is one of the largest churches in Italy and its complex includes Giotto’s Campanile and the Baptistery. The dome of the Duomo was certainly the largest in the world until modern times and still remains one of the most exquisite ever constructed. Climb all 463 steps to the top of the structure for an unforgettable view of the city. The Santa Maria del Fiore Cathedral is a must-see in the historic center of Florence!

The Basilica of the Holy Cross is the main Franciscan church in the city, and it is believed to have been founded by Saint Francis himself. The Basilica is located mere minutes from the Duomo, although when the site of Santa Croce was first chosen it was outside the walls of the city, in the marshlands. Famous personalities such as Galileo, Machiavelli, Michelangelo, Gentile, Foscolo, and  Rossini are all buried at the Basilica.

Architecturally speaking, the most noteworthy feature of the Basilica is its group of sixteen chapels, most of these beautifully decorated by Giotto, along with its tombs and cenotaphs. The floor plan of the building is an Egyptian-designed cross and it features a single nave with two aisles separated by octagonal columns. On the southern side of the church, there was also a convent, the ruins of which are still visible today.

The Uffizi Gallery in the historic center of Florence

There is always a lineup to get into the Uffizi Gallery and for good reason, as it is one of the oldest and most famous museums in the world, featuring some of history’s greatest masterpieces. Located in the magnificent Palazzo degli Uffizi, the gallery officially opened to the public in 1765 and, centuries later, interest does not appear to be waning.

Famous works on display at the Uffizi include Botticelli’s Birth of Venus, Titian’s Venus of Urbino, and pieces by artists like Michelangelo, Piero della Francesca, and Raphael.

Palazzo Pitti is a large Renaissance palace located near the Arno River, only a short distance from Ponte Vecchio. Originally belonging to Luca Pitti, a wealthy banker, the palace dates back to 1458. Later bought by the Medici family in 1549, the palace became the main residence of the Grand Duchy of Tuscany during their rule. Over the centuries, it also became a large treasure trove of paintings, jewelry, plates, and various other priceless objects.

In the latter part of the 18th century, Palazzo Pitti was used by Napoleon as a power base and after the unification of Italy was the nation’s main royal palace for a short time. The palace and its contents were donated by King Victor Emmanuel II to the people of Italy in 1919 and, since then, it has been open to the public as one of the largest galleries in the city.

Those who have visited Florence know it is a city like no other. The birthplace of so many famous and amazingly talented people, today it is terrifically well preserved and boasts art and architecture that rivals those of any other great city in the world.