The Friuli Venezia Giulia region of Italy is one of the smallest, yet most culturally diverse areas in all the country. This semi-autonomous area is also one of the newest, gaining its modern boundaries and government in 1963. Occupying the extreme northeast corner of Italy east of the river Tagliamento with the Alps looming from the north, the region shares borders with the Veneto region, Austria and Slovenia. This is by far the most easily accessible region from outside of Italy and has traditionally acted as a gateway for Germanic and Slavic invaders over the centuries.

The Friuli’s vulnerability to invasion is evidenced by the fortifications built here from the Bronze Age to the Cold War. However, they did not stop the arrival of Veneti, Istrians and Celts before the arrival of the Romans in the 3rd century B.C. The main Roman towns were Aquileia, Trieste and Cividale, which was named “Foro Iulii” after the city’s founder Julius Caesar. A corruption of this term gives us the modern name of the Friuli Venezia Giulia region. Venice and its expanding Republic would eventually absorb the area from the ruling Patriarchs of Aquileia and later Udine. After the end of the Venetian Republic and the Napoleonic wars, Friuli Venezia Giulia was annexed by the Hapsburgs of Austria.

The Austrian Empire would hold onto the Trieste area even after the unification of Italy in 1866 and the new nation would fight to unify Italian Friuli to Austrian occupied Venezia Giulia in World War I. During the Cold War the Trieste area was a frontier with the communist east and was held by a British-American administration, before being handed back to Italy in 1954. Vestiges of this time exist as there is still an important NATO airbase located at Aviano, but today the region is at peace and embraces its combined Italian, Austrian and Slavic heritage. Besides its seaside resorts, this is one of the least visited regions of Italy and has plenty of place to explore well off the tourist track.

The food of Friuli-Venezia Giulia is indicative of the regions history. The Friuli portion is more rustic and resembles cuisine of other Italian regions. Standouts include the local Prosciutto di San Daniele, a sweet cured ham that is hung to absorb the fresh mountain air. The region is known for its vast cornfields, which feed the areas demand for polenta. Montasio is an aged hard cheese that is sold at different levels of maturity. The cuisine in the Trieste area reflects the German/Slavic traditions of Venezia Giulia. Iota is a soup made of beans, potatoes and white cabbage. Porcina is a mix of boiled pork with sauerkraut, mustard and horseradish. Slavic goulash and dumplings are also local favorites. Like the Veneto, the coast loves its seafood and includes all sorts of shellfish including cuttlefish (seppia), mixed fried fish and a fish and white polenta soup known as boreto graesano. Regional desserts have a Germanic touch such as apple strudel, cuguluf (a ring cake that originated in Vienna) and gubana (made from dried fruit and raisins).

Friuli Venezia Giulia wines are rightfully praised as some of the best and the region is home to several DOC wine zones with Ramandolo receiving the coveted DOCG designation. Well-aged and tannic reds include Refosco dal Peduncolo and Schiopettino that go well with the meat and game dishes of the region. However, the whites of the Friuli Venezia Giulia really stand out with the fragrant yet dry Tocai being the most popular for everyday consumption. When eating seafood the local Malvasia Istriana is ideal, as is the ancient Ribolla gialla. Vitoska is another white but is usually served as an aperitivo while Picolit is a white dessert wine.

Friulian Grappa, made from stems and skins after making wine is considered the best in Italy. This native liquor, the only true Italian spirit once had a nasty reputation as “Italian moonshine” and was not usually found outside Italy. However, it is finally becoming popular outside of Italy thanks to standardization in the distilling process and some savvy marketing. 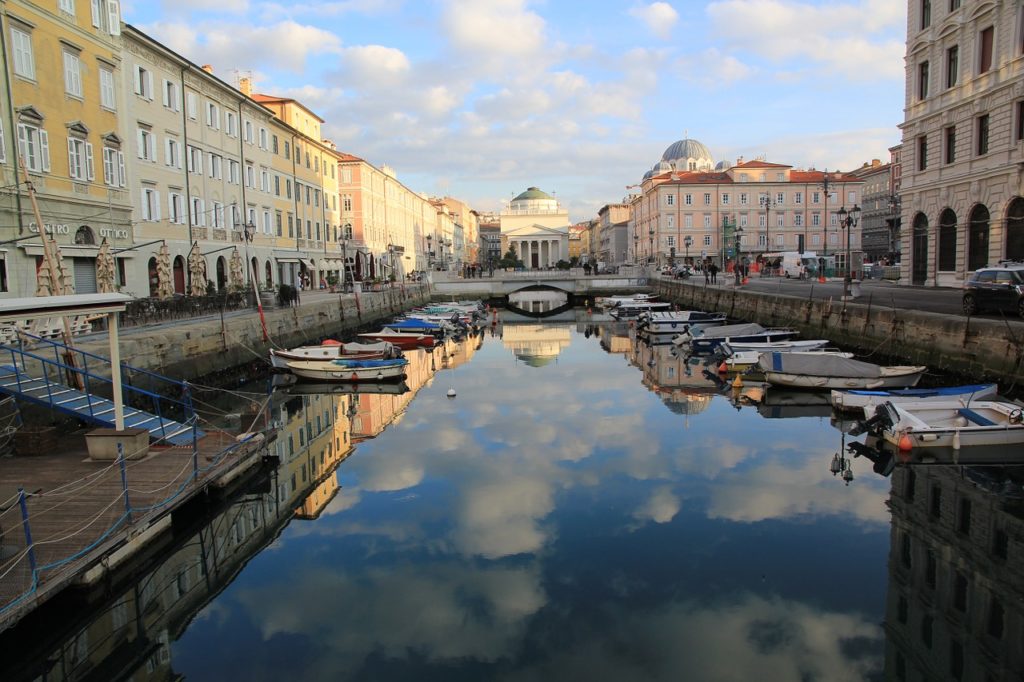 This major Mediterranean port had very humble beginnings as a small fishing port. In the 18th century, the village was turned into a “free port” by the Hapsburgs in order to compete with a declining Venice. Today, Trieste is the third largest Mediterranean port and has successfully taken over the commercial activities once dominated by the Venetians and is the major port for Middle Europe. The harbor is great for walks and is a great way to see just how busy the port is. The Piazza Unita d’Italia is the heart of the city and like much of Trieste dates to only the 19th century. The old heart of town centers on the Colle di San Giusto, and occupies the former Roman colony of Tergeste. The bell tower of the cathedral is made from the remains of a Roman temple. Trieste has always been a haven for exiles and expatriates and one of the most famous was the future Emperor of Mexico, Maximilian of Hapsburg. The Archduke left a fairy-tale castle along the gulf of Trieste called the Castello di Miramare, located in a beautiful park outside of the city. The Castello is now a museum and makes a great daytrip exploring the magnificent rooms as well as the well-manicured Italian gardens.

The once powerful city of Udine has been a fortified outcrop since ancient times and is situated in the heart of the Friuli Venezia Giulia. The Patriarchs of Aquileia moved their powerbase to the city’s castle upon the hill and the town quickly flourished. Today the town shows more of its Venetian past such as the Piazza della Libertà, the heart of the old city. From here, you can reach the hill where the castle, which houses a beautifully frescoed council hall, rises above the countryside. Another vestige of the “Most serene Republic” is the Torre dell’Orologio, a clock tower that is very similar to the astronomical clock in Piazza San Marco in Venice. Udine is a perfect jumping off point to see how the local grappa is made, as there are several distilleries in the area.

This quiet and sleepy town that lies on the Friuli Venezia Giulia plain close to the Adriatic was once a powerful Roman city, a center of trade and a military stronghold. Numerous remnants of its glorious past are found throughout the town especially along the Via Sacra, location of the ruins of the Roman forum. However Aquileia’s golden age was not quite over as the town flourished under the sway of the Patriarchs that ruled over Friuli Venezia Giulia in the middle ages. This prosperity was short lived however as the Patriarchs moved to a safer location at the Castle in Udine but not before leaving some imposing monuments to their rule. The Basilica is a must for mosaic lovers as this fortress-like church houses the largest and oldest Christian mosaic floors still in existence, dating from the 4th century. Frescoes in the church’s crypt tell of the legend of St. Mark preaching here at the request of St. Peter. The local museums span the areas history from the Roman and Paleo-Christian times to the Patriarchate. Aquileia is a good base to visit the Friulian coast especially the island resort of Grado.