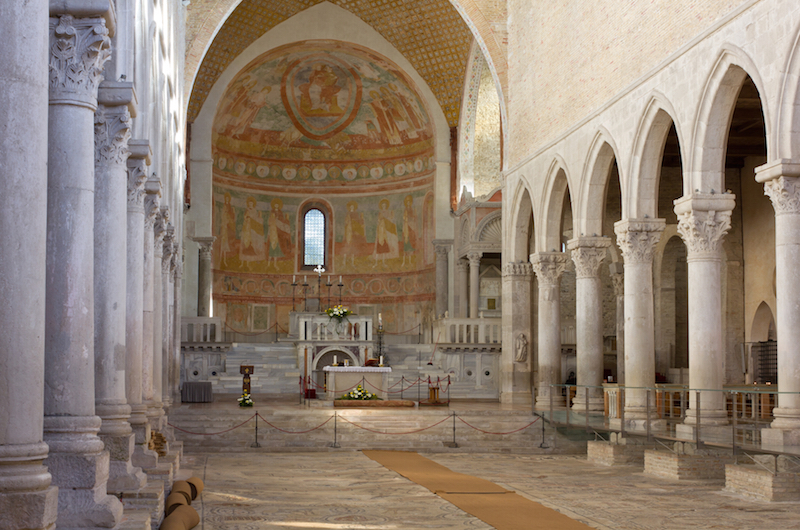 See the Remnants of a Glorious Roman Colony

The ancient town of Aquileia is located in the Friuli-Venezia-Giulia region of Italy and is on the UNESCO’s World Heritage list. One of the most prosperous towns in the Roman era, it was destroyed in the 5th century by Attila the Hun.

In truth, most of Aquileia’s Roman ruins remain buried, making it one of the biggest archaeological fields in Europe. Aside from the excavation sites, one of the town’s most famous structures is the Patriarchal Basilica, which played a very important part in the evangelization of Central Europe, featuring a stunning mosaic floor. A town rich in history, Aquileia is perfect for visitors interested in discovering the past through archaeological finds.

Remnants of the town’s Forum, center of trade and meeting place of the citizens, can be still toured today. The plans for this area were created when the settlement of the town was devised, although changes were made in later years. Due to recent excavations unearthing other houses and buildings, the Forum as it is seen today appears to be larger than the original would have been.

The Romans chose Aquileia as a site to colonize largely because it was situated on the river Natiso. Today, traces of the Roman harbor system can still be seen, including canals dug to drain water.

On the northern side of the Monastero, three different ports have been found. The Romans reinforced the river bank with Istrian limestone, known to be corrosion-resistant, and both sides of the river were connected to the city by roads leading to the market place. The genius of these early engineers, and the organization of the city, can best be seen throughout Aquileia’s port.

Aquileia has many historic houses quite traditional in nature, but only two residential areas can be visited by tourists. The Northern part of the Piazza Capitalo is the first area and can be reached through the Via Sacra. The second site is located on the western side of the Via Iulia Augusta.

The buildings have an interesting plan and the open air courts and porticoes surrounding them were a part of a typical, ancient architectural design. The houses open to the public today were those of the rich and powerful of the Aquileia of Imperial Rome.

The houses located to the north of Piazza Capitalo are some of the oldest still extant. Rooms were all designed to face west, so inhabitants would have ample light during the day. Mosaics from some of the more elaborated homes can now be seen in local museums.

Several homes on the Via Iulia Augusta, archaeological excavation has shown, where very richly decorated. One of them, which still presents the classical domestic structure of atrium and peristylium surrounded by columns and a portico, had one room dedicated to Christian worship. This room features a mosaic depicting the Good Shepherd, a symbol seen in many of the homes in the area. The floors in the home were built on uneven levels, thought to help prevent dampness from seeping into the house.

One of the most interesting archaeological sites in Aquileia is its ancient burial area. The old necropolis, which stretches along a road close to the amphitheater, was found in 1939 and has been carefully restored over the years. This cemetery is noteworthy because it is one of the few from Roman times which has reached us in a relatively complete state.

The main burial area was divided into various sections, each protected by walls and stone blocks. The stone blocks bore the name of the deceased and the family. There are five different sections in the necropolis, which belonged to different families and have been dated from the 1st  to the 3rd century AD.

The Emperor Justinian once described Aquileia as “the greatest of all the towns in the West”. Today visitors can glimpse into Aquileia’s glorious past through the historical vestiges of the times of the Roman Empire, still standing and defying the passing of time.

Aquileia can be reached easily by train and by car. If you opt for the train, hop off it at the Cervignano-Aquileia-Grado station. From there, buses will lead you to Aquileia straight away. If you are travelling by car, take the A4 motorway Venezia-Trieste and exit at Palmanova. If you are flying from somewhere else in Europe or in Italy, you may find a flight to the Aeroporto Regionale Friuli Venezia Giulia di Ronchi dei Legionari.

Aquileia is a very small town, but there are some good accomodation options around the area thanks to the high number of tourists visiting every year. The Hotel Patriarchi is located on Via Giulia Augusta and is a solid three stars with excellent reviews. If you are more on a budget, you could try the equally well reviewed Alla Basilica, in Viale Stazione.

As any village or town in Italy, Aquileia is rich in good restaurants, cafés and bakeries. If you would like to try some delicious, local cakes and pastries for a lovely afternoon snack, check out the Pasticceria Mosaico. For a nice pizza, try Antica Aquileia Ristorante Pizzeria. Seafood is the speciality of La Capannina and Il Corallo.