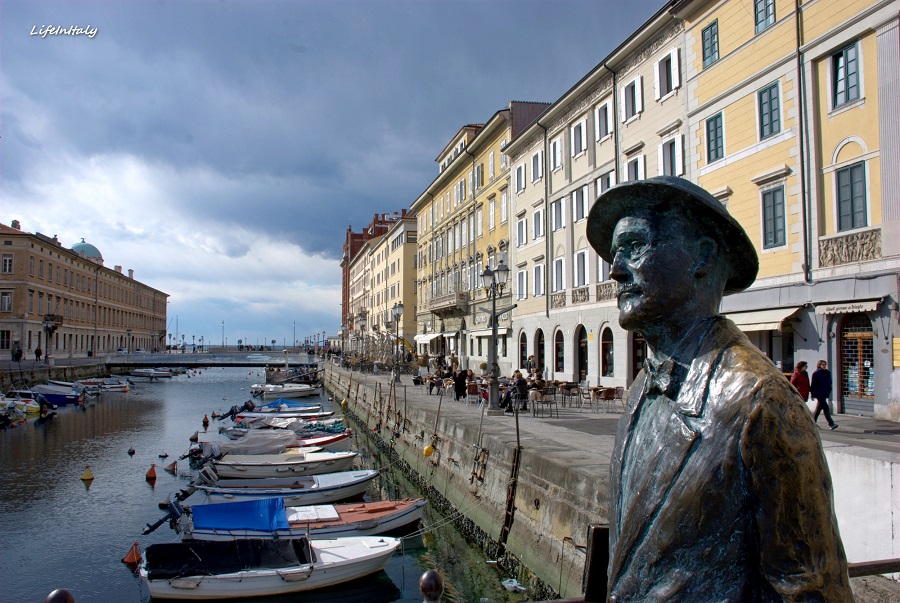 Strolling through Trieste is like leafing through a large architecture book. Walking by Neoclassical, Art Nouveau, and Eclectic style palazzos. Imagining what the streets were like in the 19th century, at the height of the city’s prosperity,  teeming with Germans, Hungarians, Levantines, Greeks, and Turks, all dressed in their very different garments.

Piazza Unità, one of the largest and most beautiful seafront squares worldwide, is the ideal place for setting out to discover the various architectural styles featured in the town. High atop the town hall, two statues, Micheze and Jakeze, have struck the hour in Trieste ever since the end of the 19th  century. During the day, the sun glitters on the gilding adorning Palazzo del Governo, while at night electric blue lighting magically lights up the paving at the point where the sea once lapped the shore.

Trieste is a combination of different cultures and artistic expressions, starting with its Roman origins, testified by its theatre, the Arco di Riccardo and the Forum on the hill of San Giusto. If, however, you choose to head towards the town center, as you go through the orderly Borgo Teresiano from Piazza della Borsa, you will find a host of palazzos in different styles: real architectural masterpieces in Art Nouveau, Neoclassical and Eclectic-style.

Trieste is, however, a city of fortresses, too. The town’s place of origin, Castello San Giusto, offers a spectacular view over the whole gulf. Another breathtaking view is found at the Castello di Miramare: initially a love-nest for Maximilian of Hapsburg and Charlotte of Belgium, the castle then became the setting for its tragic ending. Miramare is, in some way, a symbol of Trieste, in much the same way as the Faro della Vittoria is. Besides lighting the Port of Trieste, this lighthouse is a commemorative monument to the sailors who died during the First World War.

Trieste offers a thousand faces and a thousand views worth discovering.

Highlights of towns in Friuli, Italy

A host of cultures and religions.

To get an idea of all the cultural influences which have seeped through the city over the course of several millennia, you can visit its places of religious worship, and learn about its main churches. The 18th-century Greek-Orthodox San Nicola church and the neo-Byzantine Serbian-Orthodox San Spiridione church; the Catholic San Antonio Taumaturgo church, overlooking both the square bearing the same name and the Canal Grande, and  the synagogue in via San Francesco, influenced by Syrian design and the neo-Gothic Evangelical church in Largo Panfili. On the way up to San Giusto, you will find the Baroque Santa Maria Maggiore also called “dei Gesuiti”; immediately behind this is the untainted Romanesque San Silvestro, devoted to the Helvetic and Waldesian rites. The Basilica di San Giusto lies at the top of the hill.

Trieste: “It has a sullen grace” (Umberto Saba)

It comes as no surprise that great writers found places and settings to inspire them in Trieste. Today, as you stroll through the city, you can still immerse yourself in the atmospheres described or experienced by Joyce, Svevo and Saba. See it with your own eyes…

There are few cities in the world you can discover through the creativity of great authors. Trieste is one of these, as it is impossible to visit the city without coming across a page of living literature. Indeed the great James Joyce lived and, above all, found the right inspiration for his most important works here. Trieste is also the birthplace of Italo Svevo and Umberto Saba, considered by many to be the greatest Italian writers and poets of the 20th century.

Starting out from Joyce’s statue on Canal Grande, you can retrace the early 20th-century settings which inspired his most important works: piazza Verdi and the theatre, the Giardino Pubblico (a park) and the historic coffee houses where you can sit at the same table where he amiably discussed literature or pondered over his great work, Ulysses. Pasticceria Pirona, a pastry shop, where he was a regular customer, and the Picciola pharmacy, almost exactly as it was one hundred years ago, also recall the writer’s epoch.

If you pick up a novel by Svevo, and stroll around town, you really can retrace the places, the atmospheres, the smells, and the flavors found at the turn of the 20th century. There are dozens of places described in his works that are still exactly as the great writer described them. One of these is Piazza Hortis.

Umberto Saba on the other hand, with his legendary pipe, came to a halt via Dante, on the corner of via San Nicola… there is a bronze statue of him, standing very near the antique book shop he ran for many years, Libreria Antiquaria Umberto Saba.

Coffee and its Age-Old Flavors

An 18th-century tradition ties Trieste’s philosophy and lifestyle to coffee. The various ways of drinking coffee, whose nuances can only be grasped by a real connoisseur (which all Triestine people claim to be!), become a real riddle for any tourist: nero, capo in b, deca, goccia, lungo, ristretto…these are just a few of the wide range of preparations offered by skilled Triestine baristas.

The important role coffee plays in Triestine life has led to the establishment of many places of consumption, often places generating new ideas concerning art, literature, and politics. Even today, visitors are almost compelled to visit many of the historic coffee houses during their stay in Trieste.

Setting out from the oldest coffee house, Caffè Tommaseo (1825), which has kept its Hapsburg-style decorations and furnishings, you can then head towards Caffè degli Specchi, a genuine refurbished bourgeois parlour on Piazza Unità. Three other renovated coffee houses, which have marked the lives of Triestine people over the centuries, are located in the same area: ex-Urbanism, Tergesteo, and Stella Polare. On Corso Italia nearby, sits a wonderful coffee house called Torinese (1919) furnished in shiplike wainscoting.

The old espresso machines echo noisily across the Viennese atmosphere of the historic San Marco, already a center for political debate in Trieste at the end of the Belle Époque.

Trieste wouldn’t be Trieste without the sea. The sea laps right up to the historic center, a mirror for elegant palazzos. The sea, silently watched by the city’s typical bathing resorts or framed by tiny bays protected by white cliffs. The sea, which is suitable for various water sports, sailing in particular: seeing it dotted with myriad sails at the Barcolana is a spectacular sight.

The sea is an essential part of Trieste’s panorama. Once a merchant port for Vienna in the Hapsburg period, the town has kept up its important commercial and tourist activity, with enormous transatlantic cruise liners often sailing across the gulf. The sea lies right behind the center and you can go for very enjoyable strolls along the rive, its seafront, and walk to the end of the long piers, like Molo Audace, which stretch right out into the blue water. The coast proceeds as far as Barcola, then all along the coast road, with its beaches and bathing resorts, as far as Sistiana and Duino, whose small bays are protected by cliffs dropping into the sea and imbued with the fragrance of the Mediterranean brushwood.

Sailing holds a place of honor: almost any water sport can be practiced in the gulf, but Trieste has a very important sailing tradition. Countless international yachtsmen have trained in the Bora wind and on the waves of the Adriatic Sea. The Barcolana, a highly popular international regatta, is held here each year in October.

Trieste: Museums for all Tastes and Interests

From the ancient arts to war, furnishings, the theatre and the sea: a thousand worlds to discover through interesting exhibitions. Then you can wander through charming lanes to find valuable antiques and small art galleries.

The choice of museums is as rich and varied as the city’s history: a wonderful opportunity to immerse yourself in history and culture and stimulate your curiosity and interest.

There are museums of the ancient arts, war, furnishings, the theatre, the sea and even international exhibitions held in the beautiful splendidly renovated former Pescheria centrale (fish market). Many small art galleries, antique shops and libraries grace the charming quarters and lanes..

Trieste offers endless cultural stimuli for entering unfamiliar worlds or for finding out more about your own interests.

The city has also been an important town in Italy’s more recent history, experiencing moments of sadness but also of great joy, images of which can be seen as you walk in its streets and squares, listening to the locals’ stories.

Be sure to check out Part II of this article on Cities In Friuli .