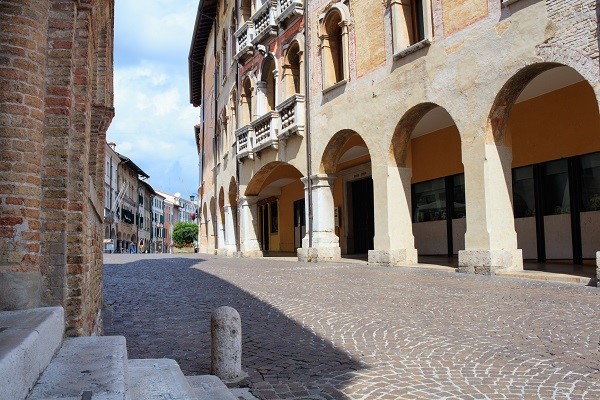 Pordenone is a city located in the Friuli-Venezia Giulia region in northeastern Italy. The name of the city means “port on the river Noncello”. The history of the city dates back to the Roman age when several agricultural settlements and villas were located here. In the later centuries, the city became a port on the river. In the 14th century, Pordenone was handed over to the Habsburg family and later to the Republic of Venice, in the 16th century. After the First World War, the economy of the city suffered extensively, but it picked up again because of the military presence after the Second World War.

Corso Vittorio Emanuele II is an interesting place to visit just for the architecture. The edifices are mostly gothic and renaissance in style and are typically decorated with beautiful frescoes. The architecture is quite typical of this part of Italy.

Duomo of St. Mark in Pordenone

The Duomo of St. Mark was built in a mixture of  Gothic and Romanesque style in 1363. It was restored and renovated several times in the later centuries. The bell tower is 79 meters high and the altarpiece was done by a native Renaissance painter. The cathedral is mainly known for its famous frescoes, especially the fresco of San Rocco.

Palazzo Ricchieri has been used in several different ways in the past centuries. It was originally built in the 13th century as a tower house but was later transformed into a private palace by the Ricchieri family. Today the Palazzo is home to the Town Art Museum.

Church of the Santissima Trinità

The church of the Santissima Trinità is located near the Noncello river. The church has beautiful frescoes in the interior and has an octagonal plant.

The communal palace was built in 1292 in a Gothic style. However, only the palace itself is that old. Several other additions were made in the 16th century, including the watchtower, the loggia, and the pinnacles, all designed by a local painter.

The Castello Di Torre was built in Pordenone towards the end of the 12th century. The castle was originally used as a residence by the local Ragogna family. In 1402 the castle was attacked by the Imperial Army and only the tower was left standing.  Today the tower castle is home to the Western Friuli archeological museum, which showcases some interesting objects and artifacts that were found in the region and dating back to Roman and pre-historic times.

The ruins of the Roman Villa of Torre were only discovered in 1950 and are a must visit, as they are the oldest archaeological site in the city.

Pordenone is quite well connected by train to otehr cities in the region like Gorizia, Grado, Lignano and Udine. Generally, there are around three to four trains everyday between Pordenone and these cities. Another option is to travel by bus:  buses are usually available for reaching the city from smaller towns in the area, and many connect Pordenone to main cities outside the region.

Moving Around in the City

Pordenone is a very compact city with an area of only 38.2 square km, so it is very easy to move around on foot. Most attractions are located in close proximity to the center, so exploring them is quite easy. Another option is to use the public buses, which are usually used by the locals. The buses cover almost all parts of the city and are quite comfortable to travel by. Taxis are also available, but they would have to be booked in advance.

Pordenone has good options in terms of accommodation and hotels, from budget to luxury. B+Bs are plenty in the city and can be a good option for the budget-conscious. Some good places to stay in the town are Hotel Minerva, Hotel Oliva, Palace Hotel Moderno, Best Western Park Hotel, and Hotel Villa Ottoboni.

Eating Out in Pordenone

Pordenone has some good options when it comes to eating out. There are quite a lot of good restaurants serving authentic Italian food, cafés, pubs, pizzerias, and delicatessens. For local food the best places to try are Al Cavaliere Perso, Mediterraneo, La Cassette, C’era Una Volta and Aquila Nera. The cafés here serve some good light snacks and appetizers, best for a light lunch. Outdoor cafés are very popular with both tourists and locals since they allow good outdoor views.

Pordenone has quite a lot of places for shopping. The pedestrian shopping streets here tend to get very crowded in the evenings, but they do have some good shops that sell locally made products. These streets are punctuated here and there with cafés which makes the shopping experience quite enjoyable. Local markets in the older section of town are particularly interesting even if you don’t want to purchase anything. This is the perfect place to enjoy the local lifestyle and experience the culture of the city.