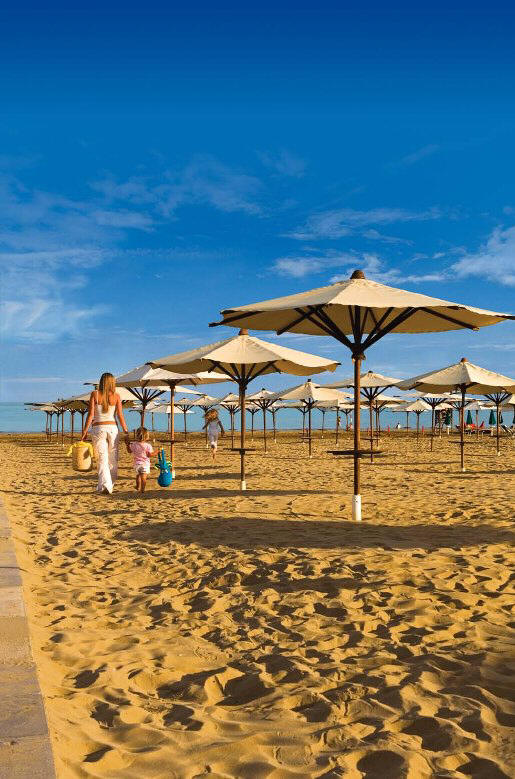 A melting pot of Latin, Germanic and Slavic civilizations; beaches of fine sand and a sea gently sloping away  from the coast in Lignano and Grado, and touching upon inlets embedded between white rocks in Trieste. Enchanting places, all year round.

Despite its limited extension, the coastline of Friuli Venezia Giulia offers many different facets of typical Mediterranean appeal, characterized by landscapes that astonish visitors because of the incredible contrasts in the space of a few miles. This is right where the Adriatic brushes upon the shores of central Europe, offering a meeting between Latin, Germanic and Slavic Mediterranean cultures.

From Lignano Sabbiadoro to Grado, the Friuli Venezia Giulia coast welcomes you with its inviting and relaxing appeal. Here you’ll find broad sandy beaches with their characteristic soft golden-brown coloured sand and dunes. And the sea is absolutely irresistible, with its shallow waters and relaxing waves that break gently on the beach.

You’ll be able to let the kids loose while you lie back and bask in the sunshine. At last, a really tranquil summer vacation, soaking up the sun and chilling out: your dream summer break, but the allure of this area lasts well beyond the summer months. The charme of Friuli Venezia Giulia’s coast is just as intense in the spring, autumn and even in the winter. This is when the beaches are ideal for long romantic strolls.

Grado is animated by its centuries-old fishing tradition, with delicious freshly caught fish skilfully prepared by the local restaurants. Northwards, the Trieste gulf, swept frequently by the impetuous north-easterly Bora wind, offers a more introspective relationship with the sea. From Duino to Sistiana and through to Trieste itself, the coastline features a succession of sheer white cliffs interspersed with areas of dense Mediterranean vegetation. It’s also an ideal destination for summer sailing enthusiasts, with a coast that blooms with flowers in the spring and offers superb walks throughout the winter along the network of paths that dominate the Gulf, offering an intense and absolutely intimate relationship with the sea.

Recharge your batteries with Sunshine, Sport, and Entertainment

Total wellbeing. Sailing, windsurfing and canoeing on the sea waves. Playing golf in the lagoon, beach volley on the golden sands, followed by some pampering in one of the many spas in Grado and Lignano. And lots of entertainment parks for all ages. And the night is still young…

Thanks to the strong sailing tradition in this area, sport is a natural companion for the sea. Even the diehard couch potatoes will find it hard to resist the temptation of the vast range of activities on offer. Sailing and windsurfing are at the top of the list. But there’s also beach volley, golf on coastal link courses, horse treks along the beach, canoeing, free climbing on rock walls and caves along the coast and inland in the province of Trieste.

If you’re keen on getting into shape, you can start straight away: the sports and sailing centres on the beaches offer a full range of information and the guidance of expert instructors. Fitness and the search for harmony between mind and body have been practiced in this area since the 19th century. Wealthy town-dwellers from the Austrian-Hungarian empire who frequented the marine spa baths of Grado can be considered to be the forerunners of today’s wellness enthusiasts.

And the Grado Spa baths, first opened on the 26th of June 1892, are still welcoming visitors today. The baths now offer all the latest facilities and equipment in a modern and refined setting. But there is still more than a hint of central European elegance in the atmosphere, adding a very special charme to the modern beauty treatments on offer.

In contrast, Lignano Sabbiadoro is a completely modern resort: here, the wellness centre is the best equipped of the entire Region. The underlying philosophy is to dispel even the remotest hint of boredom of even the most world-weary visitors.

That’s why the resort offers a package of no-holds-barred fun for people who really like to let their hair down. For example, you can take a trip around the seven amusement parks that you’ll find in the short distance between Lignano Sabbiadoro and Grado. Go to the pubs and discos or take a tour around the wine bars, or get into the thrills on offer at the many large funfairs in the area. Summer in Friuli Venezia Giulia offers a broad range of events including concerts with top artists and festivals to animate the hours of darkness. The festive showtime atmosphere pervades the entire region: in the Hapsburg-influenced Trieste is animated each year by the bright lights of the Operetta Festival.

The splendid Friuli Venezia Giulia coast offers a generous choice of marinas with more than fifteen thousand moorings. And sailing enthusiasts will be delighted by the many fully-equipped service centres that respond to all their specialist requirements.

The seaside – our way: thousands of attractions

Not far from the beaches lie the lagoons of Marano and Grado, where you can wander through a landscape of islets and reed thickets, gazing at water reflections. A world apart, where time is suspended and the sky is the stunning scene of myriad birds soaring up, filling the air with their melodious cries.

After the vast beaches and rocky Trieste coastline, the Adriatic of the north east reveals yet another personality: the lagoons of Marano and Grado, where the sea is transformed into a labyrinth of sandbanks, reed beds, luxuriant dikes and tranquil canals, the ideal habitat for thousands of bird species. A world apart, where time is marked by nothing more than the wind and the tide. An enchanted landscape, where the unique pearly luminescence of the sky is absolutely unforgettable. A voyage of discovery of this secret world can be over land or by sea. The destinations are the nature parks of the Valle Canal Novo, and the mouths of the Stella and Isonzo rivers.

All close at hand and accessible from the beach in a matter of hours for a completely different day, which typically draws to a close with a delicious dish of freshly caught fried fish. And there are always things to do within a stone’s throw from the beach – places to visit that give your holiday a flavor of exploration and discovery: an afternoon spent in the immense Hemingway park of Lignano, a walk along the Rilke path at Duino, almost suspended between the sky and the sea, and the countless other options offered by Friuli Venezia Giulia to awake your imagination.

From June to September the visitor centre of the marine nature reserve of Miramare offers a sea-watching tour for divers, whether experts or beginners. A unique and stimulating experience providing a valuable opportunity to get a close-up look at the sea bed and the many treasures it conceals in total safety.

A sea of history for all seasons

Aquileia, bearing all the magnificence of the Roman Empire. Gorizia, with its Mitteleuropean charm. The Collio, dotted with vines and wineries. Trieste, the city of a thousand faces. The ancient village of Muggia, with its delicious fish cuisine. All a stone’s throw away from the seaside…

Even the historical visits in this area are not limited to the summer season. Discovering the secrets of this magical land where diverse cultures have intermingled for centuries is easy. Either in the height of summer or during a quiet winter weekend break. The Aquileia area forms a backdrop for Grado: the Roman and mediaeval flavor of Friuli Venezia in all its splendor. It’s a rare experience to be able to visit such a bountiful and perfectly preserved archaeological site. And the experience is a far cry from a museum outing.

Let’s say it’s more like a voyage backwards through time: vast mosaic floors captivate visitors with a succession of patterns that still hold the fascination of life told by the skilled hands of historic mosaic craftsmen. At the river port on the massive stone wharves you can almost imagine the tightly moored Roman merchant ships laden with amber, spices and precious oriental fabrics. Gorizia also offers reflections on the Great War and the Iron Curtain with its Austrian overtones… this is where the last European boundary collapsed only a few years ago. Relaxing in one of the many bars or admiring the views from the Castle, haunted by tales of espionage and smugglers.

In the enchanting landscape of the Collio follow the fragrances of fine wines which exude from the wineries. City of a thousand faces, Trieste is criss-crossed by countless tourist trails: historical, cultural and religious. The enchanting port of Muggia is nearby. The fish is superb in all seasons. And you’ll be impressed by the view of the sparkling waters of the Adriatic from the courtyard of the Santa Maria Assunta church, a fine example of 9th Century architecture.

The residence of the last of the Venetian Dogi rediscovers its ancient splendor as a Centre of Contemporary Art, Art Academy, and Regional art treasures catalogue and restoration centre. Go for a refreshing walk through the park along its pathways past lakes and ancient trees. A sea of flavor. The cultural melting pot of Friuli is expressed in the rich flavor tones of its cuisine, with fish in boreto and jota, Sacher cake and frico. Not to mention its most famed products: San Daniele prosciutto and the wines from the Friuli vineyard. The populations that came into contact in this area left their mark also on the local cuisine.

Here you can find a range of fresh Mediterranean flavors, aromatic fish prepared in the “boreto” style, and the spicier tastes typical of central European cuisine. Gulash and ‘jota‘, a speciality first course from the Slovenian Carso area, are among the favourite menu items in Trieste. In the historic bars, a refreshing glass of beer and a slice of finger-licking Sacher cake remind you that Vienna is just around the corner. And even when seeking an eatery away from the beaches, you’ll find numerous tiny restaurants serving local specialities such as ‘brovada‘. It should also be remembered that Friulli Venezia Giulia is the home of the internationally renowned San Daniele prosciutto and some of Italy’s greatest white wines.