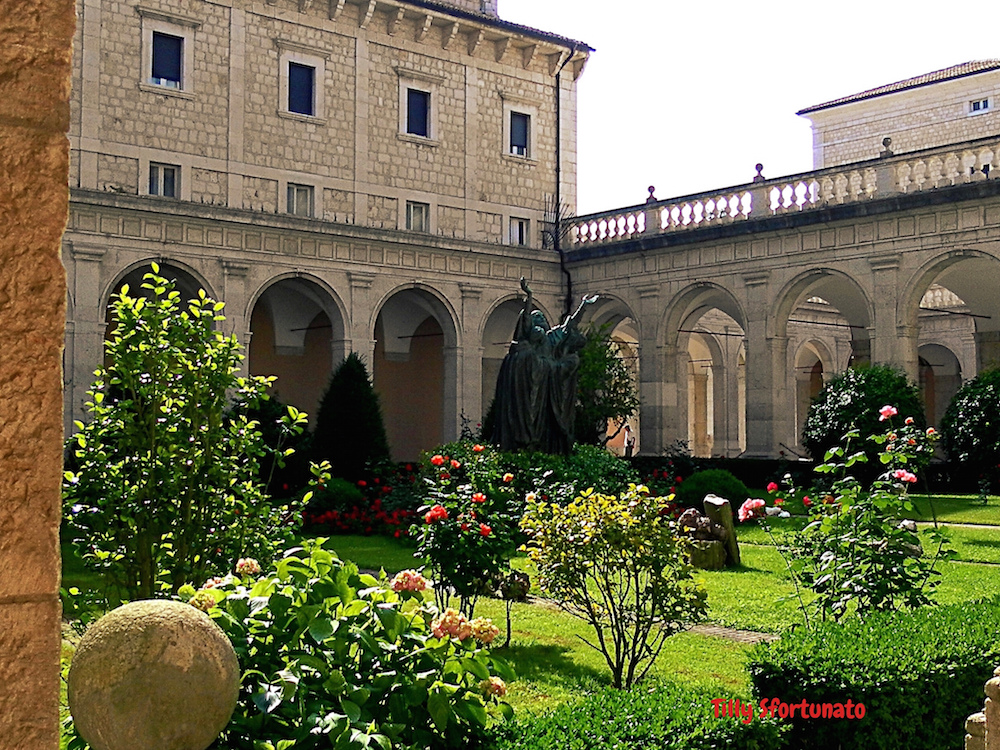 It is really a delight to visit the Abbey of Montecassino to admire its beautiful architectural splendor and remember its history. The Abbey was founded by St. Benedict and built over the site of the pagan temple of Apollo, where the sculpture of Apollo was destroyed along with the altar. Due to its significant location, this place has always been a target of military attacks throughout history, the most gruesome of all certainly being the Battle of Monte Cassino fought during the Second World War.

About the Abbey of Montecassino

St. Benedict founded the Abbey in 529 AD, after destroying the existing structure of the temple of Apollo. His aim was to establish a monastery dedicated to John the Baptist and that followed the Benedictine rule. After his death in 543, Benedict’s monastery found itself at the centre of many a military action, in name of its strategic location. Because of this, the monastery was destroyed several times. When it was attacked by the Lombards in 584, the ruling abbot and his monks sought refuge in Rome, where the community remained for about a century. At this time, the body of St. Benedict was translated to France. Soon after that, Monte Cassino began enjoying its own renaissance, thanks to the work of its religious community, as well as the help of some notable noblemen: by 744, Gisulf II, duke of Benevento, had donated land to the Abbey with the aim of constituting territorial, secular dependencies.

As a result, the Abbey became a nevralgic communication center at the core of an area of great political and commercial relevance, including in its basin parts of the Lombard principality of Benevento, as well as some Byzantine states along the coast. In 883, it was attacked by the Arabs, who burned the abbey down and ferociously killed the Benedictine Bishop of Montecassino. Before its distruction, the Abbey had managed to attract notable intellectual and religious figures, including Erchempert, author of the Historia Longobardorum Benevantanorum Degentium, the “History of the Lombards residing in Benevento.” Two centuries would pass before the Abbey could return to its former splendor.

It rose to fame again during the 11th century, under the abbacy of Desiderius. During Desiderius’ years of rule, a large number of spiritual and artistic works were produced, including some of the most famous illuminated manuscripts of the high Middle Ages. Renowned for its cultural appeal, and its centrality in the diffusion of spiritual and theological works, the abbey underwent reconstruction works involving some of the most talented artists of the time, who travelled to Montecassino from all over the country, and indeed, Europe, to contribute with their art to its decoration, coming from as far as Greece to enhance the Abbey’s beauty and splendour. Unfortunately, all was to be destroyed in later centuries.

When a tragic earthquake hit the area in 1349, the Abbey was razed and had to be built again. In that occasion, it became see of a Cathedral, which was later combined with that of St Justina of Padua. Four century later, in 1799, the site was invaded by Napoleonic troops and destroyed once more.

However, it was the infamous battle of Monte Cassino, on the 15th of February 1944, to embody the bloodiest and most tragic of all destructions.

The entire structure was destroyed during a series of air raids and bomb attacks. It was completely rebuilt after the end of the war and newly consecrated in 1964 by Pope Paul VI.

The Battle of Montecassino

The battle is among the most gruesome taking place on Italian territory during the Second World War. The significant location of Montecassino made it the target of a series of invasions and attacks, which climaxed in February 1944, when the Allied forces tried to break through the German militarized area around Rome and free the city. The western half of the Gustav Line was held by the Germans, but the hilltop of Monte Cassino was not occupied. However, they held strategic positions along the steep slopes just below the walls of the abbey. On the 15th of February, the Abbey of Montecassino was entirely destroyed by American bombings. This was the second of three, unsuccessful attempts -the first took place from January 17th to the 25th, the last from March 18th to March the 25th- by the Allied forces to take Montecassino. The Allies, whose troops included US, Indian, Kiwi and British soldiers, lost about 54,000 lives.

Thus, a fourth battle took place, which was fought under the leadership of General Wladyslaw Anders of the 2nd Polish Corps. The first assault reduced drastically the number of active German forces and enabled the British 8th Army to shatter the German lines across the Liri River. The second assault carried out by the Polish troops, aided by Moroccan tribesmen forces specialized in mountain warfare, proved immensely expensive from the point of view of human losses: the German 1st Parachute Division was ousted from its position and was captured by the Allies. Finally, the Podolian Ulans Regiment captured the ruins on May 18th.

The seizure of Monte Cassino enabled the Anglo-Americans to proceed towards Rome, which capitulated shortly before the Normandy invasion. Though the Abbey of Montecassino was entirely destroyed, all of its precious historical treasures were rescued and transported to Rome. Nothing of the original structures of the medieval abbeys, however, has remained.

Visiting The Abbey of Montecassino

The invasion of Monte Cassino led to the loss of around 54,000 allied and 20,000 Germans lives. Today, a series of cemeteries stand to honor the men who fought and died there. If you are visiting Montecassino, make sure to see the city Museum to find a vast collection of some of the most magnificent artifacts created in named of this holy place. However, just check out the timings as usually this museum remains closed during the winter months, though it may be opened on Sundays for visitors.

The entrance to the Abbey comprises three bronze doors with various inscriptions depicting the possessions bestowed on the Abbey throughout the centuries. There are plenty of interesting things to see inside the monastery, such as the statue of St. Scolastica, which was recreated after the end of World War II. There are lovely paintings, too, such as “The Glory of St. Benedict”, which depicts St. Benedict surrounded by bishops, monks and nuns. The Bramante cloister measures 40 metres in length and around 30 metres in width, and an octagonal well, supported by Corinthian columns, adorns its center.

The Baroque style pipe organ, built by Neapolitan Mascioni di Cuvio, is formed by over 5000 pipes and has three keyboards. Stunning are also the frescoes in the cathedral, representing stories of the oath taken by the monks entering the community. There is also a secret underground church, built in 1544, where you can find different chambers with mosaic tile works. The most outstanding portrays the Madonna and child with golden tiles. This hidden treasure is also home to a beautiful marble statue of St. Benedict.

When you are visiting Monte Cassino, you can catch some wonderful panoramic views of the valley from the top of the abbey and see the Polish Cemetery. However, make sure to visit the Abbey before lunchtime, as visits have fixed timings. The Abbey of Monte Cassino is charming in its timeless beauty and a marvellous place to engage in prayer and meditation. It is also, because of its history, a monument to the horror of war and, at once, to the resilience of man.