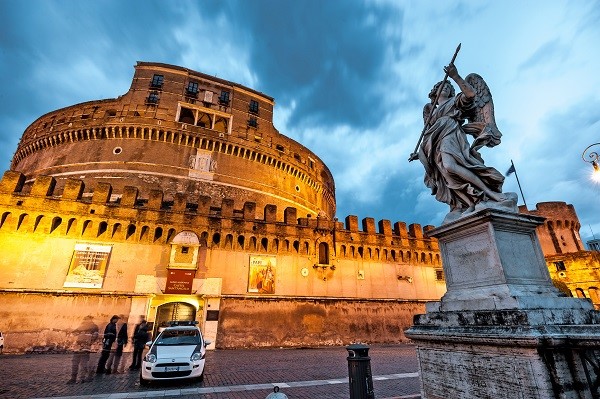 If you are visiting the ancient city of Rome why not stop to see the Castel Sant’Angelo, the mausoleum of the Emperor Hadrian? Named for the gorgeous statue of the Archangel Michael on the roof, today the building is the home of the Museo Nazionale de Castel Sant’Angelo. Erected on the shores of the Tiber the structure is located close to the Vatican and was once used as a military fortress.

The Tomb at Castel Sant’Angelo

The Castel Sant’Angelo was originally commissioned by Hadrian to be the burial place for himself and his family and is also known as Mole Adriana. The mausoleum was built between the years 135 AD and 139 AD and was originally fashioned as a decorated cylinder. The structure also boasted a garden and a golden quadriga. Hadrian’s ashes were placed in the mausoleum a year after his death in 138 AD and were followed by those of his wife, Sabina, and his adopted son, Lucius Aelius who died the same year.

The emperors that followed also had their ashes placed with Hadrian’s. The last emperor to due so was Caracalla in 217 AD. The bones of Julia Domna and her son Publius Septimius Geta were also buried here. Today the ashes of these ancient emperors can be found in the Treasury room, located deep within the building.

The Pons Aelius was also built by Hadrian and directly faces the mausoleum. Today it provides a beautiful vista as one approaches from the right bank of the river and the center of Rome. The Baroque angels added in later years are not to be missed nor the beautiful elements of Christ’s Passion.

The castle has five floors, the first of which holds a winding Roman construction ramp. The second floor contains the prison cells and the third features large courtyards and was once a military headquarters. In later years the fourth floor was optioned by the Popes, who decorated it with lavish art work and frescoes. The fifth floor of the structure is a large terrace that provides breathtaking views of the entire city. One can imagine the centuries of people who have stood on the same roof looking out onto ageless Rome.

In the year 1277, the castle was connected to the Vatican by a long corridor known as the Passetto di Borgo. This infamous secret passageway allowed popes to take refuge in the castle when the city was under siege. The castle also held popes who were inprisoned.

The papal apartments in the castle have beautiful rooms that are richly decorated. The pontiffs who stayed in the castle over the years made quite sure that their suites were well appointed. Below these beautiful rooms one will find the prison and torture chamber as well as a spiralling corridor that was part of the original mausoleum and which leads towards the bottom of the castle.

The castle’s namesake angel sits on the building’s beautiful terrace and was created by Pieter Verschaffelt during the 18th century. The statue was built in bronze to replace an earlier work done in marble. According to legend the Archangel Michael appeared at the top of the castle in 590 AD and ended the plague that had been destroying Rome. From that time on the building was known as the Castel Sant’Angelo.

Much of the original decoration and contents of the building were lost when it was converted into a military fortress in 401 AD. Many of the ashes and urns were scattered about by Visigothic looters when Rome was sacked in the year 410 and the original statue was destroyed when the Goths besieged Rome. A funerary urn believed to be Hadrian’s has miraculously survived and can now be found in the Basilica of Saint Peter.

The popes converted the original mausoleum into a castle in the 14th century and it was Pope Nicholas III who connected the building to the Vatican. The building would be a refuge for Pope Clement VII when Rome was sacked in 1527.

Leo X had built a chapel in the castle that featured a beautiful Madonna done by Raffaello da Montelupo who also created a statue of Saint Michael holding a sword in 1536. A luxurious apartment was constructed on the orders of Paul III to ensure that the pontiff had a comfortable place to stay in case the city was under siege.

In addition to using the castle as a prison the papal states also ordered executions that took place in the small square inside the building.

Today, Castel Sant’Angelo is one of the most visited places in Rome and has been featured in countless movies and books. Dan Brown used the castle as a location for his book Angels and Demons and it can also be seen in the movie Roman Holiday. In Puccini’s opera Tosca, the castle is the location where Cavaradossi is held prisoner.

During the summer you can have dinner in the eveing on the top terrace. It offers good food for a reasonable price in an extremely romantic place.