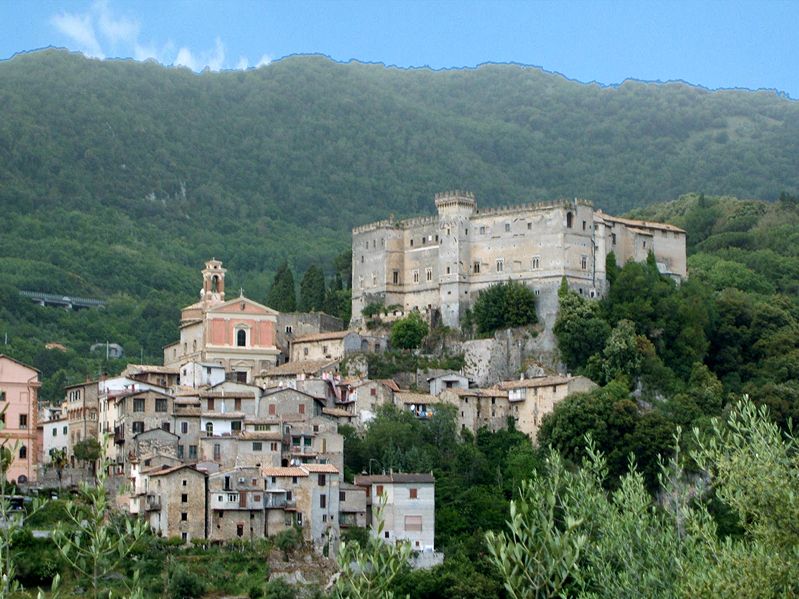 A large part of the beautiful piano nobile is available for various public events. The main salon of the castle is beautiful and decorated with splendid artworks from the 17th Century, and there are several frescoes in the main salon created by Marco Benefial. The frescoes depict the nuptials of Andromeda and Perseus along with scenes from the fiefdom of the Massimo Princes. There are two smaller rooms, including the Hercules room, close to the salon. The walls of the Hercules room depict the various endeavors of Hercules. The frescoes, done on the ceiling vaults, were attributed in recent years to the Zuccari brothers.

There are two armories through which the other four rooms of the castle can be reached, and these rooms have many portraits of the princes and their consorts. The hanging garden is exceptionally beautiful and quite luxuriant, though small in size. The garden’s main fountain is surrounded by many different kinds of flowers and plants, including iris, wisteria, and lemon trees. From the wonderful height of the hanging garden itself, one can enjoy the view of the castle’s formal park. Inside the formal park, there is a large statue of the goddess Roma, dating from the Roman Age. There is also a small church dedicated to Saint Filippo Neri within the complex of the castle.

The origins of the Castello Massimo date back to the 10th Century, when it served as a fortified monastery and belonged to the Subiaco Benedictine monks. In 1574, it was passed on to the Massimo family through Fabrizio Massimo. He purchased the fief from the Zambeccari family. Saint Filippo Neri himself recommended the family purchase the fief and had been a friend and spiritual adviser to the family. The town of Arsoli’s first Lord was Fabrizio Massimo, who brought several improvements to the area. During his rule, he built an aqueduct, restored churches, and raised the status of the town. Arts and crafts were boosted and agriculture was encouraged. He also restored the castle with the help of Giacomo Della Porta, a noted architect of the time.

The Castello Massimo was renovated during the Italian Renaissance and several beautiful gardens, the theater, and the frescoes were added. For many centuries the castle remained an important part of the family and the region. The Massimo family had close ties to several other noble families in Italy and other European countries, and evidence of these influences can be seen in the castle today. More frescoes were added to the castle salon in the 18th Century by Marco Benefial, along with the hanging garden, then the formal gardens were added later in the German Gothic style.

The castle still belongs to the Massimo family, one of which, Prince Leone, had been a man who loved the culture, music, and art, and in the 20th century was noted in the field of music.

The town of Arsoli is located on the border of the Abruzzo and Lazio regions. Apart from the castle itself, there are some good sights to visit in the town with artistic and historical significance. Nearby is the small village of Tivoli, which has many churches dating back to the 12th Century. The temples to Sybil and Vesta, an amphitheater from the 2nd Century, and many medieval buildings are located in Tivoli.

Tivoli is especially famous for its three beautiful villas, Among them is Villa Gregoraina, which has only just been reopened to the public in recent years, and Villa Adriana, which was built by Hadrian as part of his ideal city in the year 118 AD and has many beautiful buildings in its complex. Villa d’Este was designed by Pirro Logorio in the 16th Century and has many beautiful frescoes from noted schools in Italy, and a beautiful formal garden with fountains.

Another noted town near Castello Massimo is Subiaco, noted for its Santa Scolastica monastery, which is known for its mixed architectural styles. It has a bell tower from the 12th Century and the church itself is from the 18th Century and includes three separate cloisters. The main feature of the church is the library, which houses several important ancient documents. The monastery is located close to a large rock where Saint Benedict stayed for a few years. The hermitage of San Cosimato and Mandela are nearby as well, located above the River Aniene. The hermitage is a Franciscan monastery built in the 17th Century.

The area around Arsoli also abounds with beautiful natural landscapes, including the valley of the River Aniene, and the Mountains of Lucretili and Simbruini are also located in the region.

Today the Massimo castle (Castello Massimo) is used for several public cultural events and also for banquets and weddings. There are five reception rooms that are made available for events, including the Piano Nobile, which has many beautiful frescoes, the Hercules Room, and two other frescoes, which are connected through a corridor. The hanging garden is also on the same level. The Oliara room is located on the floor below this level and is an informal room. The small church located on the grounds of the castle can be used for weddings as well as the larger church in the village itself.