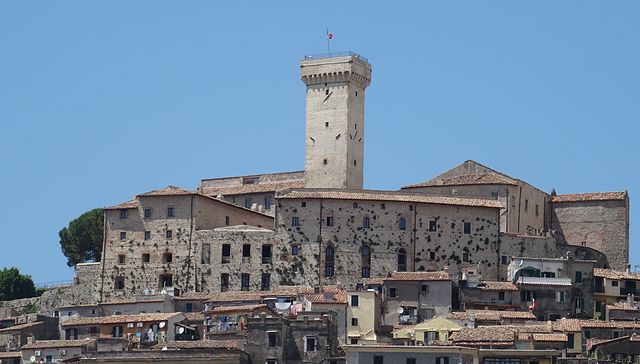 Castello Savelli Torlonia is situated at the highest point in the town of Palombara Sabina in the province of Rome, and beautiful views of the Prenestini Mountains and Monte Soratte can be seen from its high position. The town was connected in ancient days to Via Tiburtina, Via Salaria, and Rome. Today, the castle is owned by the Palambara Sabina municipality and holds a total of 132 rooms. The castle is spread over an area of 10,000 sq meters. Castello Savelli Torlonia is one of the many castles in the Lazio region you must see.

The town of Palombara runs a museum and a small library dedicated to the castle, and several conferences and academic studies are hosted there throughout the year. From the day construction of the castle was finished, it has always been an important part of the town.

History of the Savelli Torlonia Castle

Let’s learn now a bit of history of one of the beautiful castles in Lazio. The first reference to the castle in Palombara Sabina was made in 1064 when a document was filed which mentioned it. The original structure was built by Ottaviani, which at the time was a branch of Crescenzi, and was designed as a square castle, spread over an area of around one hectare. Count Octavian later signed an act of restitution in 1111 for the abbot St. John, then over the years, several changes were done to the castle’s original structure. While originally built only as a watchtower and simple defensive structure, between the 13th and the 14th Centuries, it was significantly extended and altered. Later, in the last half of the 15th Century, the wall reliefs inside the castle also underwent several drastic changes.

In 1250 the original family who had owned the castle surrendered to Luca Savellim, and ownership was given to Luca, who was the nephew of Pope Honorius III. Later, Pope Honorius IV, the castle’s successor, left the castle in his will to the family of Savelli. In 1310, it was the seat for a tribunal during the trial of the Templars, quite an important era in the history of the castle, and in 1455, Castello Savelli Torlonia was the location where Giacomo Savelli’s son was murdered for revenge by Suou Vassals since they had been exiled by the family.

Over the years the castle was also the cause of rivalry and dispute between many different Italian families. In 1498, when Charles VIII was in Italy, it was the cause of a dispute between the Savelli Family and an alliance between the Orsini and Colonna families. The Savelli was forced to burn the town of Palombara in order to save it from falling to the Orsini, and in turn, forced Pope Alexander VI to resolve the situation. The Pope favored Orsini, and Palombara subsequently declined and fell to its enemies, and in 1504, the Savelli family fled the town. Then in 1508, the Borgias, Pope Julius II’s family, returned to the town.

In later years the castle was rebuilt by Troilo Savelli. During this renovation process, the structure was strengthened and all the frescoes in the rooms and inside the chapel were made, but in 1532 he had to flee the Pope’s wrath for wounding a man in Rome, and left the town and the castle. In1602, the castle belonged to Virgina Savelli, the wife of Duke Piero Farnese, who founded the beautiful Santa Maria of the Seven Sorrows monastery.

Over the next several years the castle’s ownership shifted through many different hands. In 1637, it was sold to the Borghese family with whom it remained for almost two centuries and was not sold again until 1893 when the Torlonia family bought it, thus receiving its final name of Castle Savelli Torlonia. In 1949 it was then sold to Sforza Cesarini, who in turn sold it to the municipality of Palombra in 1971. The municipality retained the castle in order to make it a cultural center and to protect and restore its heritage.

The castle is widely renowned for its interior. Inside, there are luxuriant and opulent rooms decorated with many frescoes and beautiful artwork. The frescoes are quite well restored and still visible to this day. Troilo Savelli commissioned Baldassarre Peruzzi, an architect, and painter who had been a part of the Pinturicchio School and was influenced by Bramante and Raphael. In fact, quite a lot of the rooms of the castle have similarities to the Vatican Rooms, which had been painted by Raphael. The frescoes in the castle were done by Peruzzi himself, though two others were done locally by an artist in the 16th Century.

There are several noteworthy frescoes in the castle, for instance the one found in the study and the series of frescoes depicting portraits of various Roman heroes from the monarchy all the way to the Republic era. These include well known heroes like Attilio Regulus, and every portrait is etched with sayings which portray and praise the character of the hero. The characters are all separated by brown horse heads painted on a green background.

On the ceiling of the study, there are several frescoes in which cherubs were painted in such a way that at certain points they turn into leaves of acanthus. Even in the closet, there are frescoes, all of which take inspiration from liberal arts such as dialectics, geometry, arithmetic, rhetoric, music, and astronomy.