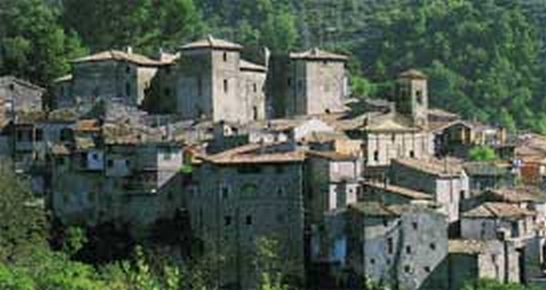 About forty-five minutes from Rome is the small town of Sambuci, a quaint center that owes its origins to the Benedictine monks who founded many of the area’s settlements. One of the main attractions in charming Sambuci is Castello Theodoli. From the 1200s to the 1600s the castle underwent various transformations depending on its use at the time. Used as both a defensive fortress and a home, the Castle was owned by various important families over the years including the Orsini’s, Zanìbeccaris, Astallis, Piccolomini’s, and the Theodolis, the family from which the castle takes its name.

The History of Castello Theodoli

The late 1600s was an important time for both the castle and the town. When Cardinal Camillo Astalli fell out of favor with the church he moved to Sambuci and set about creating a beautiful town so as to increase his own prestige. To help welcome visiting Roman nobles and ambassadors in style, Astalli renovated the castle and added a loggia and forts, which opened up onto the estate’s park, to give the structure the air of a noble residence.

In the 18th century, another garden was added to the castle. There were two parts of the new garden, an English-style romantic area with spontaneously growing greenery, and an Italian-style area with flowerbeds and terraces. The flowerbeds were designed so as to form the coat of arms of the Theodoli and Astalli families. During the French occupation, the castle was sacked but found itself back in the hands of the Theodolis in 1878. In the 19th century, the garden would be enlarged once again.

During the Second World War, the Germans used  Theodoli castle as one of their headquarters and it suffered serious damage. It was only in 1991, when the castle passed into the hands of the local government, that restoration on the monument began anew.

The castle was modified several times over the centuries but still maintains its medieval styling. It has angular towers and outside the fortress, there are houses that once belonged to the castle’s workers, along with stables that held the owners’ horses. Following the Astalli years, the castle’s interiors were quite lavish and remain quite well preserved today.

Castello Theodoli’s kitchens are located in the basement and the ground floor is where most of the daily work took place. The reception and private rooms of the owner were located on higher floors, with the second floor holding the guest rooms and the third floor containing the bathrooms.

Many of these rooms were decorated with entire cycles of beautiful frescoes with various literary, landscape, mythological, and religious themes. The frescoes were done by Giovan Angelo Canini, a pupil of Domenichino, in the 17th century. There are delightful surprises to be found within the interior of the castle, like a gallery that opens up onto a false landscape and a bathroom decorated with biblical scenes.

The room of the Cyclopes and the Jerusalem Delivered room are decorated based on the poem of Torquato Tasso and many of the rooms’ ceilings and beams were covered in pure gold gifted to Giovanni Theodoli by the Spanish monarchs in 1510. In the 17th century, the wood parts of the ceiling were painted with scenes from the Card of the Sun by Mario de Fiori.

The Park in Castello Theodoli

Created in the 17th century, the park is located next to the castle and stretches out over an area that covers 55,000 square meters. Both the Italian garden, with its geometric flowerbeds forming the Theodoli and Astalli coat of arms, and the English garden were quite famous in the years they were created.

The Italian garden stretched towards the open gallery of the castle where one can climb two beautiful staircases to reach La Bocca Storta (“The Crooked Mouth”) Fountain. There are two alleys at this junction where, once upon a time, stood a riding school as well as a large tub and small waterfall. From the main entrance gate at Piazza della Corte one can reach the alley, if you follow it to the wider part you can see various statues designed to represent the Four Seasons.

The second part of the park is located to the right of the castle. There are plenty of spontaneous greens in this area along with two ancient cedars at the center of the garden. The other trees found here include holm oaks, oaks, pines, and firs.

Other Places to Visit in Sambuci

So, let’s see other places beyond the Castello Theodoli. The Borgo of Sambuci is an enlargement created in the 17th century by the Astalli family. The Borgo includes Via Girolamo Theodoli, where one can admire restored buildings from several different centuries and the Corte Coperta where there are some buildings annexed to the castle. In this area, there is also a street that leads to the oldest part of Sambuci through a majestic 18th-century portal located near the cylindrical castle tower.

If you are in Sambuci stop by Santa Maria delle Grazie, a church and convent that belonged to Augustinian hermits and then the Franciscans. Though the convent’s origins were medieval it was reconstructed by the Astallis in the 17th century. You may also want to visit the Church of Santa Croce, built-in 1662, and the Church of San Pietro, originally founded by the Benedictines.

Besides the Castello Theodoli the quaint town also has a charming historical center perfect for walking around. There are also several good restaurants, cafés, and bars in Sambuci, which can be easily reached from Rome by bus or train. Another option in getting to the town is to drive. You can take Highway A 24 from Rome, exiting at Vicovaro-Mandela. Drive for 0.5kms along with the SS Tiburtina Valeria until you reach the Vicovaro-Mandela station and take the Sambuci exit. Another option is to take the SS Tiburtina Valeria from Rome until Tivoli. Proceed on the Tiburtina for another 18km in the direction of Subiaco. When you reach the station of Vicovaro-Mandela takes the exit for Sambuci.