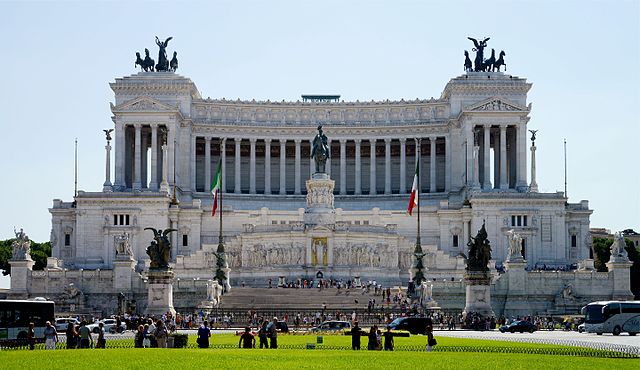 The Vittoriano, otherwise known as the “Altare della Patria ” (altar of the nation) was nicknamed by the French, because of its appearance, “La grande tarte” (the big cake). It may not be the most outstanding piece of architecture of the capital, yet it remains one of the Italian patriotism symbols, mostly because it holds within the Tomba del Milite Ignoto, the tomb of an unknown soldier, a victim of The First World War, a symbol of all the soldiers who lost their lives fighting for the country.

When it comes to its appearance, the French did get it right: the monument looks just like a gigantic wedding cake decorated with cream and meringue. The Roman population, known for being very direct in expressing its views, has never been very fond of this cumbersome construction. That is why the Romans have always bitingly called the monument “la macchina da scrivere” (the typewriter), certainly not comparing it to modern keyboards, but rather to those early mechanical contraptions, with vertical keys called “cembali scrivani.”

Few people know that the architect of the monument, Sacconi, almost died of a stroke, or possibly of a broken heart, because of all of the abuse that he suffered to complete the project. In order to celebrate the unification of Italy and create the Altar of the Nation, he intended to reproduce the “Pergamon”, the splendid Greek monument also known as the “ara di Pergamo” (the arc of Pergamo) that had been unearthed and reconstructed in Berlin. This monument was not easily viewed until after the fall of the Berlin wall because it was located in the eastern zone of the city.

I myself saw it for the first time shortly after the fall of the Berlin wall. Although I had little difficulty in reaching the eastern zone in a taxi, to return to the western zone, I had to plead for charity as at that time there were practically no taxis in existence in the east. Returning to our monument, the first blow to the poor architect was dealt by the reigning family, the Savoia, who wanted to bolster their self-image and insisted that in the center of the monument there be placed an enormous equestrian statue of King Vittorio Emanuele, which according to the Romans is totally out of place. Here’s also a video about the Altare della Patria, Piazza Venezia, Rome.

The second blow was dealt by a powerful minister at the time, who hailed from the northern city of Brescia. He insisted that instead of travertine, the brownish-grey stone with which the eternal city had always been built, the monument be built using white marble from his area called “botticino di Brescia”. According to generations of artists, travertine absorbs the sunlight, whereas the marble from Brescia which is a stark white was an insult to the esthetic taste of the city and to the architecture of the nearby Roman Forum and all of the other ancient and medieval monuments. The same minister insisted that the marble of Brescia be also used for the walls along the Tiber river, which are also white but in this case are less overwhelming.

Now comes an interesting part of the story.

At the inauguration of the monument, the authorities decided to offer vermouth and some pastry to a limited number of selected persons involved in the project. But where was the refreshment for these 10 persons offered? In the belly of the horse of the equestrian statue, as proven by a photograph owned by me: no doubt a very original place.

The photo clearly depicts the guests who are not even too squeezed, and there must have been placing also for the photographer who however does not appear. But returning to the original nature of Rome, and trying to identify another unusual place to offer refreshments to a small group of say 12 persons, what comes to mind is not very far from Piazza Venezia. And that is the globe at the top of the dome of Saint Peter’s cathedral. Many crowned heads have visited this location as commemorated by the tags easily visible on the external terrace of the dome itself.