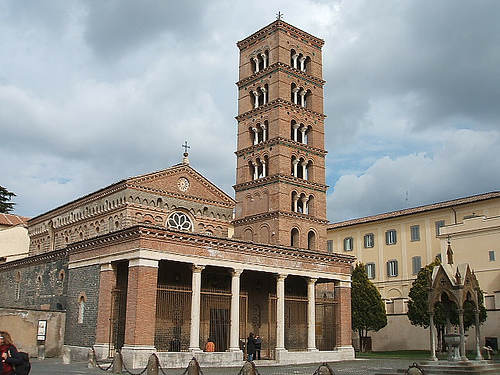 While exploring the many beautiful things to see in Castelli Romani, here’s another category that you shouldn’t miss. Check out some of the most important churches of Castelli Romani, Italy.

The most internationally known is the Grottaferrata Abbey  –  Exarchic Abbey of St. Mary of Grottaferrata  – was founded in the year 1004 by the saints Nilo and Bartholomew, fifty years before the schism between the catholic and the orthodox churches, on the remains of an ancient Roman villa which is believed to have belonged to famous roman orator Cicerone.

The Abbey is now of  Byzantine rite, under the authority of the Holy See. Abbot Nilo da Rossano, who came from the Byzantine Calabria, built the monastery in the same place where he had an apparition on the Holy Mary. Because he didn’t see the works completed, since he died the year after his arrival in Grottaferrata, the task was, thus completed under the supervision of St. Bartholomew. The façade, with its rose window, has been restored to its original shape. The façade also has small ‘blind’, gothic style, arches which decorate its sides.

The hallway, composed of a travertine column, was restored in 1930, while the interior, originally in Romanic style, was turned into Baroque in 1754, by means of plaster covering which encases the frescoes and the columns. Remarkable it’s the triumphal arch that separates the center of the church from a presbytery, decorated with a medieval fresco representing the Pentecost. A beautiful library, containing Greek and Latin books, it’s considered one of the most complete worldwide. One of the most important churches of Castelli Romani.

The cathedral is also Frascati’s parish church, the old St Mary in Vivario. The town was rapidly growing and the parish becoming too small, therefore, in 1599 cardinal Tolomeo Gallo, with the permission of the local governor and Pope Clemente VIII, began the construction of a new cathedral. The money was partly given by the pope, the locals  –  even placing a tax on the local wine  –  and various religious communities. Architect Ottaviano Nonni was commissioned for the task. The works were proceeding slowly, due to financial problems, so, in 1608, bishop Mariano Pierbenedetti, proposes to leave the works as they are, and just complete the outside of the building, thanks to this, the first mass could be celebrated in 1610. Another remarkable piece of the churches of Castelli Romani.

After more works were carried on, the cathedral was finally fully consecrated in 1636 by cardinal Fausto Poli, while the smaller altar, placed in the St. Isidoro chapel, was consecrated in 1680 by cardinal Cybo. The construction was still missing the façade, so, in 1696, architect Girolamo Fontana was summoned to outline the project, which came to life, in 1698. In 1703, cardinal-bishop Lorenzo Corsini took care of the presbytery, and, in 1747, clocks were mounted on the two steeples, standing on each side of the façade. In 1788, British cardinal-bishop Enrico Stuart  –  the last in the line of the Catholic Stuart family  –   donated a new organ to the cathedral.

Cardinal bishop Antonio Maria Cagiano de Azeredo, in 1857, urged the Frascati community to perform some works in concomitance with the Diocesan Synod of 1858.  In 1908, more major works had to be done, and the inside floors were completely remade. Due to the WWII bombings, the cathedral was completely destroyed, with the exception of the façade and the perimeter walls, from which the cathedral stood up again in 1949. The roof was restored in 1965 and the façade in 2002. The St. Peter Cathedral of Frascati stands right in the center of town – Piazza San Pietro – and it’s open to the public.

The abbey, dedicated to St. Romualdo, was founded in 1607 by the Congregation of Camaldoli Eremites of Monte Corona and was completed, as we see it today, in 1613. The abbey is located on the road leading to the Tusculum hill. Another important one of the churches of Castelli Romani. This site was chosen, so the friars could have their residence close to Rome. Shelter to foreigners and pilgrims is guaranteed, but it follows strict rules, the main one denies access to women.

The access to the abbey is through a beautiful pine trees promenade, which leads to a piazza on which the church, built-in 1772, the communal buildings, infirmary, dining hall, and main offices, converge. The friar’s cells are located on the first floor, each with four rooms and a small vegetable garden. As I mentioned before, women are not allowed in the building, so all the paintings and the church itself can only be visited by men.

At the times of the noble Altemps family, the Barefooted Carmelites Friars took possession of St. Silvestro, named after an existing oratory, dedicated to the Pope-Saint Silvestro. According to tradition, St. Francis of Assisi sent two of his monks who established a convent in that area. For two centuries it was flourishing, then, all of a sudden, it was unexpectedly, abandoned. In 1448, princess Colonna di Salerno, at that time owner of the building, gave it over to the Canonry of the priests of St. Giovanni in  Laterano who were authorized by NiccolÃ² V, to erect an abbey. Standing on the hilltop, it also incorporates the pre-existing oratory. In 1521, Gerolamo Vida, a great scholar, and humanist, was elected, by Pope Leone X, abbot of S. Silvestro, and later made bishop of Alba (Piedmont Region) by Pope Clemente VII.

Finding itself without an abbot, the abbey was taken over by the Reverenda Camera Apostolica  –  the Reverend Apostolic Chamber, and Pope Paul III turned it into a ‘Commendam’. A big benefice of which cardinal Umberto Gambara took advantage right away, by turning the abbey into a big mansion, surrounded by beautiful gardens, which Pope Paul III often enjoyed.  When cardinal Gambara passed away, in 1549, the ‘Commendam’ was given to Gianfrancesco Gambara, also a cardinal like his predecessor uncle, who, in return,  passed it on to his nephew, Cardinal Francesco Pisano.

Cardinal Pisano enlarged the building, as we see it today, adding large lounges. Pope Sixtus V, once again, turns into an abbey, giving it to cardinal Innico d’Avalos d’Aragona, who will keep it for three years only, passing it on to his nephew Don Tommaso d’Avalos, in 1593. After over one century, the complex became fully religious again by becoming owned, in 1604, by the Carmelites, who were looking for a quiet and solitary place near Rome, to turn into their novitiate. On April 17th, 1605, the abbey officially began its existence, guided by Prior Alberto del Sacramento. The friars added to the construction, the wing which includes the religious-seclusion area and, also, modified the façade by opening a door. Erected a steeple with the arcade below, enriched the church, and the environment with precious paintings. The abbey can be visited and it’s also known for the ‘Madonna del Castagno’  –  Our Lady of the Chestnut  –  from a miracle believed to have happened in the area. These would be some of the many beautiful and remarkable churches of Castelli Romani.