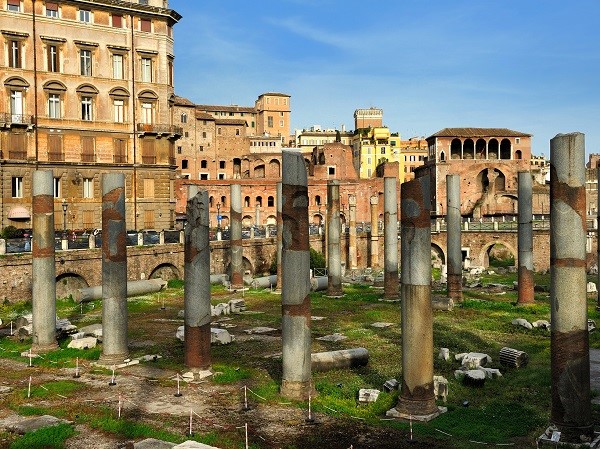 The Synagogue: This massive building was erected between 1901 and 1904 and designed by V. Costa and O. Armanni. The synagogue stands in the area in which the old ghetto used to be before being demolished by King Vittorio Emanuele II after Italy became united (1870). The king rebuilt the ghetto and gave full Italian citizenship and civil rights to Rome’s Jewish community. Since old examples of other similar structures were not available, an Assyrian-Babylonian style was chosen for the new synagogue. One requirement was that the Temple had to be seen from all the highest points of Rome. Today a  Jewish museum is also located in the Synagogue.

Via Arenula: It’s one of the main streets in the ghetto and it runs from Lungotevere de Cenci up to Largo Argentina. The street boasts plenty of shops, the Ministry of Justice building as well as an ancient Ara (altar) to the god Atlantis.

Largo Argentina: Actually called ‘Largo di Torre Argentina’ (Tower Argentina Square). This name was given by Johannes Burckardt (known in Rome as ‘Bucardo’) who from 1483 on, has been the ‘Master of Ceremonies’ of five popes (Sixtus VI, Innocent VII, Alexander VI Borgia, Pius III and Julius II). He used to sign himself as ‘Argentinus’ because he was born in Strasburg, which the Romans named in latin Argentoranum. When in Rome he bought some land and, demolishing old medieval houses, he erected his own palace, now known as ‘Casa del Bucardo’ (House of the Bucardo). In 1730, his building was partly used to make the ‘Teatro Argentina’ (Argentina Theatre) and a broken off tower which stills stands and gives the name to the square. This medieval tower is known as ‘Torre del Papito’ or the little pope’s tower. During some restoration works, pieces of a huge statue were found and as the diggings progressed, a whole ancient area dating back to the Roman Republic, resurfaced, including four ancient temples.

Ponte Fabricio: The oldest bridge in Rome, built in 62 BC by Lucio Fabricio, at the time, superintendant of roads. It is also known as ‘Ponte dei Giudei’ (Bridge of the Jews) since it is located right next to St. Gregory’s Church where, during the papal times, catholic preaching were mandatory for the Jewish community.

Please look also at Jewish tours of the Ghetto in Rome

Restaurants in the Roman Ghetto

La Taverna del Ghetto: Typical tavern in the heart of the ghetto, has a secular tradition of Roman-Jewish Kosher cuisine and wines. From €35 to €45. Booking: recommended. Phone: 06 68809771. Closed on Friday nights.
Address: Via del Portico d’Ottavia, 8

Nonna Betta: Kosher restaurant located a few steps from behind the Synagogue. From €30 to €35. Phone: 06 68806263. Closed from sunset Friday to sunset Saturday.
Address: Via del Portico d’Ottavia, 16

Boccione Pastry Shop: in the heart of the ghetto, in Via del Portico d’Ottavia 1, this is a small anonymous pastry-store but, for the Roman Jews, it’s a monument to local tradition. It’s the Kosher bread store of the community, with a very old fashioned way of making all kinds and size of pastries which go hand-in-hand with the Jewish festivities. You can also see Catholic priests and nuns lined up for some cookies… even the pope likes them!

Bete’ Avon: Jewish for ‘enjoy your meal!’. Rotisserie located in Via Portico d’ Ottavia, 1/b. Here you can stop for a healthy snack based exclusively on an Kosher Roman-Jewish cuisine under the supervision of the Roman Rabbanut. Cell Phone: 349 6359521. Also open on Sundays.

Shopping: Many stores are present in the ghetto. Mostly fashion wear and textiles. All you have to do is walk around.

I have an article on the website about Jewish Tours that I wrote with Michela Pavoncello from Jewishroma you should be able to find her on Google and you should ask her.

Looking for a place to attend a Passover seder.
Suggestions are much appreciated.
Thank you

0
Life in Italy > Tourism > Lazio > The Jewish Ghetto of Rome