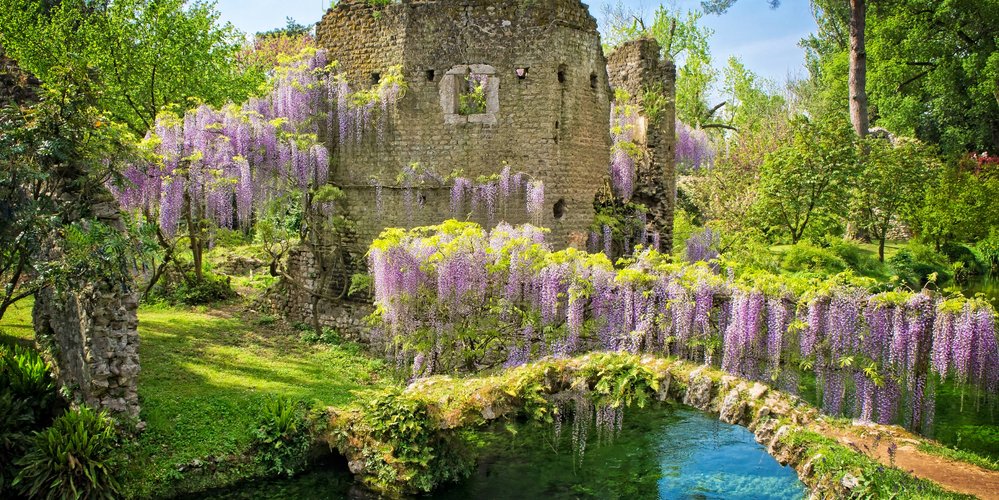 Ninfa’s gardens are located on the ruins of the old city of Ninfa, at the bottom of the Lepini mounts, situated at the junction of the cities of Sermoneta, Norma and Cisterna di Latina.

The old city was founded as a small village or a settlement of a few peasants along the path of via Pedemontana–Volsca that linked Rome to lower Lazio. Its geographical setting was and still is the basis of all its horticultural richness. Via Pedemontana–Volsca in medieval times was the only roadway that was utilized for commercial traffic, since via Appia was rendered unusable by the growing marshes in the Pontina flatlands. Therefore the installation of a toll/customs activity along this important roadway turned out to be very profitable. Moreover, inside this settlement there were various water that feed lake Ninfeo (from which the city got its name); as well as the current gardens.

The city quickly became autonomous and well-guarded due to the mountains, it became part of the pope’s estates. Pope Alexander III was crowned right inside the Basilica of Santa Maria Maggiore in Ninfa. In the 13th century, Ninfa became property of the Caetani family and more precisely of Onorato Caetani, nephew of Boniface VIII, to whom we can attribute the contruction of the castle and tower. However during what could be described as a Papal civil war in the 14th century, the attempts to conquest, and the spreading of the marshes slowly brought about the end of the city.

After centuries of ruin, marshes and malaria, Ninfa was brought back to its original glory in the 20th century. So rejuvinated was Ninfa that it was designated a Natural Monument of the Italian Republic (in 2000), and also the most beautiful garden in the world (New York Times, June 16, 2002).

Initially Gelasio Caetani managed the restoration of the castle in order to turn it into a summer estate; slowly he also worked on the garden by bringing in plant specimens from all over the world. This garden’s peculiarities include the balance of chaos and harmony that govern it. Freely-growing plants find the perfect harmony and perfect setting to the point of creating paths through the nature-covered ancient ruins. No wonder nearly 60,000 tourists a year from all over the world fall in love with it – it is romanticism come alive.

The key to the garden’s success is its geographical location. The territory is almost a natural greenhouse that allows all plants to grow up to three times larger than their expected size and possibly, age. Some of the specimens still alive have well outlived the average lifespan of their species. The sea is a few miles away, the mountains are behind it, keeping away the cold and blocking the marine currents. A light rain falls almost every afternoon, creating around Ninfa the perfect environment, unique in the world, managed in the best of ways and source of envy for all other botanical gardens.

Beautiful images from the “Giardini di Ninfa” thanks to Visit Lazio, the tourism board of the Lazio Region.

Another peculiarity is that the Ninfa garden always takes a different shape: the great quantity of vegetation allows visitors to have a different scenario as each month passes by. Each time bringing a new set of blooming periods with different scents and colors. Perhaps the best month to visit the garden is May, when the many rose bushes are blooming on the ruins like a waterfall of red, yellow, and other color roses, falling from every angle.

Visiting the garden is possible only with a guide, and along a specific path to ensure the garden remains pristine. However only with a guide is it possible to fully understand and discover the site and its history, which today has been reborn among virgin waters and an atmosphere of peace and magic.

Is the garden open in January?

Hello Erika. The gardens are open only on certain days, and on those days you can only visit on guided tours. You can buy the ticket online or at the gardens, but they are limited, so you might not find them on site. There are English Speaking guided tours at 10.30 am and 3.30 pm, so you should book the visit between 9-10 am and 2-4pm. All the info is at the official website: https://www.giardinodininfa.eu/giardino-di-ninfa/

My understanding is that you can only visit the gardens on certain public days. Is it possible to visit at other times with a guide? I am coming from California, and really want to visit on my trip to Rome in May. Grazie!

0
Life in Italy > Tourism > Lazio > The Gardens of Ninfa