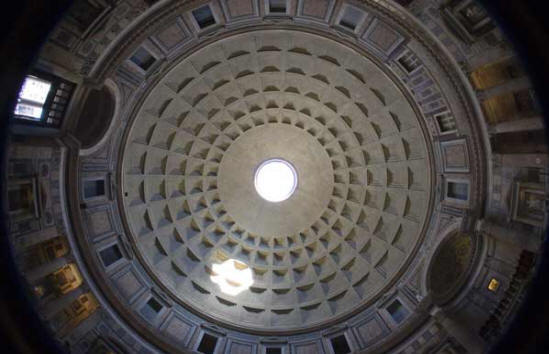 The pantheon is one of the most recognized, and oldest monuments still standing in Rome.

Originally built as a temple to all of the Roman gods, the Pantheon (originally built around 27 BC) was torn down and rebuilt by emperor Hadrian around 120 AD. That structure is the same as the one you will see when you visit today. The Pantheon is the oldest intact structure still standing from the Greco-Roman world, and has been used completely throughout history.

The building is a complete circle, with an opening in the ceiling that looks out onto the sky above. The opening is meant to symbolize the eye of heaven looking down over the temple, and being “all-seeing” to the world below. There are three different levels of granite columns, and bronze doors that have remained in the pantheon for over 1,800 years. The height of the dome is exactly equal to the diameter of the circular interior of the building. It’s amazing to think back under what conditions the pantheon was originally built under, and then see what the early Romans were able to create.

If you are visiting Italy, especially Rome, then visiting the Pantheon is something that you really must do. The pantheon is a tourist attraction that pulls in people from around the world and is something that everyone who visits Rome usually goes to see, but there is a good reason why. You will undoubtedly run into a good deal of tourists when you make your trek, so come prepared to deal with the crowds.

Visiting the pantheon is free to the pubic, and the pantheon welcomes tour groups of all shapes and sizes, although in 2019 there were rumors about a possible fee to enter the Pantheon. There are several different tour options available in several different languages, so everyone should be able to enjoy a trip.

You can book a guided tour for a fee.