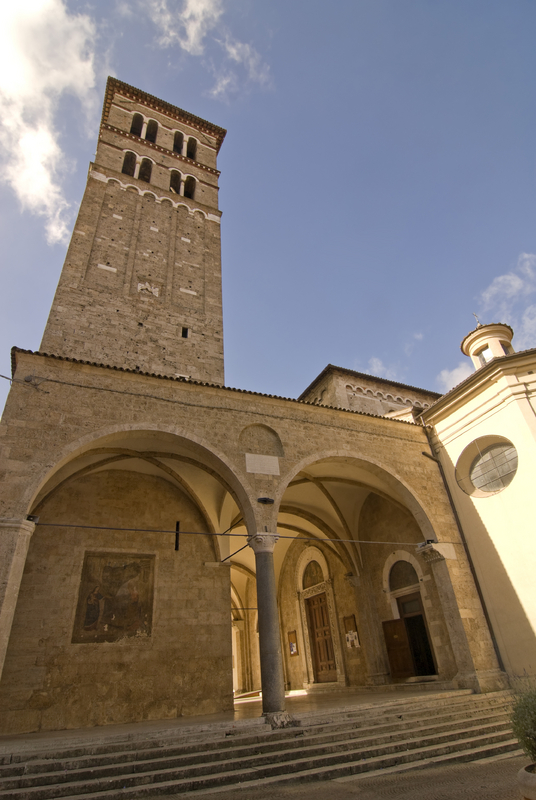 Rieti is a town located in the Lazio region in central Italy. The center of the town is located on top of a small hill and provides beautiful views of the surrounding areas. The town is quite small with a population of only approximately 50,000. Rieti is located quite close to an important ski center in Mount Terminillo.

Since the Roman times the town has been considered to be an important central location. It has hosted various important races like IAAF Grand Prix for years. These races have been extremely popular through the world and many records have been broken in the races in Rieti.

The cathedral of Rieti’s construction began in 1109 at a sight of an ancient basilica. In the 17th century the cathedral was almost totally rebuilt. The bell tower of the cathedral is very exquisite; it dates back to the 13th century and is Romanesque in style. The interior is almost done in baroque decorations with several beautiful art works, frescoes and 16th and 17th century paintings and a few statues.

The Palazzo Vescoville was built in the 13th century and the most impressive features of the palace are the eight renaissance style windows and the loggia that were built in 1532. The architecture is quite beautiful and noteworthy. The Diocese gallery of Rieti is now located here at the palace.

The Palazzo Comunale or the Town Hall of Rieti was initially built in the 13th century and then rebuilt later in the 18th century. The town hall is located at the important Piazza Vittoria Emmanuale which has important roots in the Roman times. The town gallery is located here and has a good collection of art works of important artists.

Church of Santa Maria in Vescovia

The church of Santa Maria in Vescovia was originally built in the 8th century and was radically modified later on. The present appearance of the church is Romanesque and the interior of the church has a single nave and various frescoes and art work from the 13th and the 14th centuries.

The church of Saint Francis was built in the 13th century and several major changes were made later on. The interior of the church has a single nave and the decorations are understated and elegant. The paintings that used to be originally in the church from the 14th and the 15th century and the frescoes have now been shifted to the museums of the town. However, the church is still worth a visit for its relatively elegant appearance and its good architecture.

Rieti falls on the train line that connects Terni and L’Aquila so any trains that cover this route would also reach Rieti. The town can also be reached from the Rome train station; however, it does get difficult reaching here from other destinations. Those travelling by car can reach the town from the Firenze-Rome highway, A1. Travelling to Rieti by bus is also very comfortable. There are plenty of buses connecting Rieti to Rome; the COTRAL buses are especially very comfortable and timely. The town is also connected well to the other cities in the region by buses.

Rieti is relatively a small town so the options here are quite limited. There are a few hotels but they are very luxurious in nature, however, most of them are still comfortable and some of them are even interesting. There are also some good and inexpensive Bed & Breakfasts in the city where visitors can find simple and clean rooms to stay. Some good hotels to try in the city are Hotel Blue, Hotel Miramonti, Hotel Quinto Assio, Hotel Albergo Quattro and a few others that are located close to the railway station of Rieti. There are also a few old villas that have been converted to hotels and are managed by families.

Rieti is quite a compact town so moving around is relatively easy and stress free. The streets here are yet not traffic congested so it is quite easy to walk around and explore the town since most attractions are all concentrated in a few areas. Those with their own cars can also easily drive around the town and parking is not much of a problem. The public buses are also quite comfortable and are timely. Most locals who commute use the local buses since they are very inexpensive and are quite comfortable.

Eating Out in Rieti

The restaurants in Rieti are simple but serve good local food. Most restaurants in the town serve simple Italian food and home style local dishes. There are also a few pizzerias and some cafes in the town that serve light lunches and pizzas, sandwiches and pastas. However, it’s best to stick to the Italian food since it is delicious and is not very expensive at all. Some good restaurants to try out in Rieti are Solo Per Due, Ristorante II Bistrot, Enoteca Boccondivino and the Trattoria Smile bar which is family run and a great place to spend some time.

Rieti does not have many options when it comes to shopping. There are only a few shops in town that sell international brand, but it’s best to stick to the local merchandise. There are a few small shopping strips through the city that are lined with charming shops selling clothes, shoes, jewelry, home decoration and textiles and these are good places to just stroll around. The old quarter of the city has some interesting shops selling traditional pastries and desserts, cheese and wines.