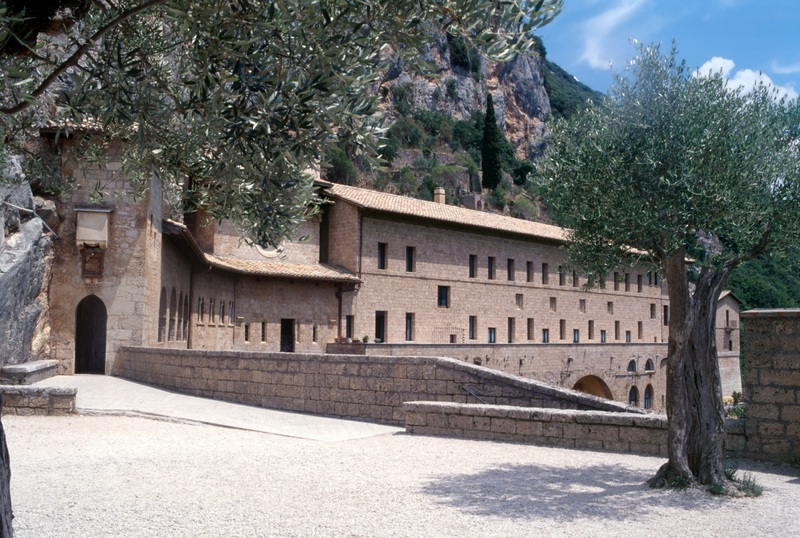 Rocca Abbaziale: The Fortress of Subiaco

The Rocca Abbaziale is located in the picturesque town of Subiaco in the province of Rome, in Lazio. It lies twenty-five miles from Tivoli, alongside the river Aniene.

The history of the castle is linked to the Benedictine Abbey which was founded in the 15th century by Saint Benedict of Nursia. The fortress itself overlooked the town, at a small distance from the Holy Grotto and the monasteries.

History of the Castle – Rocca Abbaziale

There was a constant struggle for dominance in Subiaco over the early centuries which ended only when Abbot John V crushed all resistance and decided to build a new castle in the town to show his domination and power over Subiaco. The location of the castle was chosen not only so that it could protect the residents from invaders, but also so it could save the residents from the danger of many floods from River Aniene at the foot of Subiaco.

Ever since the Rocca Abbaziale was built, it became the residence of all the powerful abbots. The first-ever Abbot to live in the castle was Cardinal Torquemada. At the end of the 15th century, the castle was completely rebuilt on the orders of Cardinal Rodrigo Borgia who was later elected as Pope Alexander VI. The new fortifications were quite large and sprawling. The castle became the administrative center for control for several other forts and castles ruled by the abbots of Subiaco.

Over the years the Borgias sent several troops commanded by Napoleon to storm and destroy the fortress. In the year 1557, the castle was again restored under Cardinal Francesco Colonna. The abbots from the Colonna family remained in the castle till the year 1608 when it passed on to the Borghese till the year 1625 and later to the Barberini family till the year 1738.

Before the prestigious post was removed, the last commendatory abbot to live in the Rocca Abbaziale was Cardinal Spinola Giovambattista. Several changes were made to the structure in the 18th century by Pope Pius Vi wanted to change the castle into a residence. Several architects, decorators, and workers were called from Rome to transform the castle. Pietro Camporese then designed and managed to combine the different buildings of the estate into one large building.

The interior of the castle was done by Liborio Coccetti. Finally, the castle was abandoned in the year 1915 and was badly damaged. It has now been restored to a great extent and forms one of the major tourist attractions of the area.

Subiaco, where the Rocca Abbaziale is located, is a small peaceful town that sits at 408 meters from sea level.
Subiaco derives from the Latin Sublaqueum, which means “below the lakes”. This refers to history. The town came into being after Nero ordered three artificial lakes in the Ist century AD to be created as fishing ponds for a nearby villa built by Emperor Nero. The medieval town is built over a rocky cliff that overlooks the valley and is today an important tourist location because of its important religious landmarks like the Sacred Grotto of Saint Scholastica and the Benedictine monasteries which are located in the town. There are plenty of beautiful churches and chapels in Subiaco along with beautiful ancient buildings.