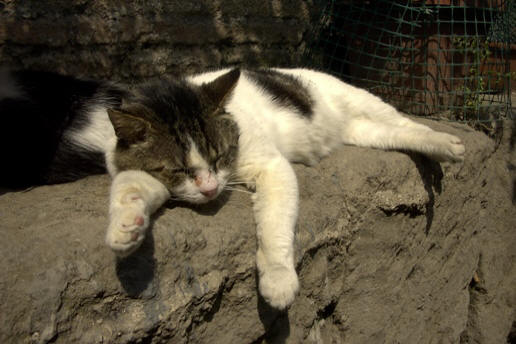 Cats Roaming the Streets of Rome

When you first arrive at the Torre Argentina cat sanctuary, you are subconsciously reminded of the children’s game where the object is to find items hidden in a drawing. As you glance around the ruins of the four temples you spot a black and white feline curled up amid the broken columns, another lazes along the top of the wall, blending in with his coat of gray and white, and a solid black one brushes past your legs. You begin to keenly focus and peer closer to see if that could be a kitten hidden in the shadows. More often than not you are right. Inside the sanctuary the mood is light, the energy is high and a shared love of felines is unmistakable.

Silvia Viviani and Lia Dequel co-founded the cat sanctuary at Torre Argentina in 1993. Before they met and became friends, they would pass by the ruins and see the cats in need of food and medical attention. Franca Stoppi, an Italian actress, would regularly feed the cats and pay for medical services, but the need was greater than she could manage alone. Viviani and Dequel began helping her, but it still wasn’t enough. Someone suggested asking passing tourists to help with donations. Viviani was uncomfortable with the idea, but necessity caused her to reconsider. The first day, she recalled, she dressed in her best clothes. She didn’t want people to think she was asking for money for herself. And she says it worked. People gave and she and her colleagues were able to aid many more cats. The only downside was that as people learned of the sanctuary, they took the opportunity to abandon their pets. The case load doubled the second year.

Viviani described the space back then as “dark and damp and terrible.” They had no electricity or running water. Today, the cat sanctuary is very much improved, but it is cramped and in need of expansion. Lucia, a volunteer, keeps computerized cat stats. Adoptions have increased over the years but never enough to keep pace. On average, only about one-third of the discarded cats are adopted.

All new arrivals are quarantined to protect them and the other residents. Then they receive medical attention and are spade or neutered. Dedicated veterinarians provide services well below normal costs to maximize the number of animals helped. The sanctuary states they receive no funding from the city of Rome or any other government institution. Most donations come from tourists.

Volunteers are always needed and sometimes help in unexpected ways. There’s a facebook group where you can learn how to help and have more information.

The most urgent need for the cat sanctuary is to find new families for the homeless pets. One visitor even flew all the way back from New York to adopt, because she could not forget the furry friend she made in Rome. Cats distant adoption is available for those unable to take a pet home with them. For a small donation, you can choose a cat to support. You will be kept informed of how your pet is doing and will be sent photos periodically. You can also donate through Paypal, an easy and handy way to support the feline community of Rome.