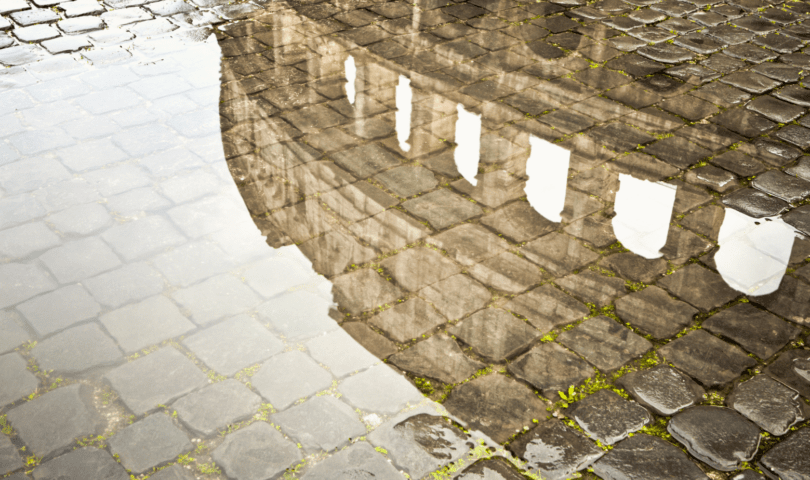 Sampietrini in Rome is the peculiar, dark cube-shaped stones that pave the roads of the capital. The Roman cobblestoned streets are unmissable. And they are not hard to spot, as most of the main roads as well are being covered by them in the city center. Cobblestones in Rome are fascinating. Giving the streets a whole different vibe.

Sampietrini are known to be treacherous. They are the nightmare for women on high hells and, sometimes, even for drivers. In fact, hitting the brakes of wet sampietrini pavement is like ice skating. So, indeed, cobblestones might be a nightmare. For tourists as well, it’s really important to wear comfortable shoes in Rome! Otherwise, after a few hours of strolling on cobblestones, your feet will be hurting badly!

These cobblestones cover most of Rome’s historical center. They are also common because they adapt to the ground’s shape. Since they are of solid volcanic rock, they can also withstand heavy loads of traffic.

Sampietrini in Rome: a long tradition

Workers cut these small cubes into half-cone-like shapes, about the equivalent size of a quadruccio (small Roman brick). These volcanic basalt cubes are as much a part of Rome’s scenery as the Colosseum. Unfortunately, the City Council has started to remove them in certain areas. Reason being, that as we mentioned, they can be really dangerous.

A bit of history of cobblestones in Rome

The name Sampietrini comes from the name of the maintenance workers who used to take care of Saint Peter’s basilica’s furnishing and decorations. Of course, these workers were called sampietrini.

Monsignor Ludovico Sergardi was the Vatican’s supervisor to the St. Peter’s workshop. He created the term in 1725, after a curious incident. In fact, the carriage of PopePope Sixtus V almost tipped over due to the bad pavement condition of St. Peter’s square. That’s when he decided to pave the square with these characteristic basalt cubes.

Later, the whole city would use them. And that’s why Sampietrini in Rome are so ubiquitous.

Another useful term to know is selciarolo. This is the stone that forms the pavement. The term still indicates the worker who cuts and puts the Sampietrini pavement into place. This is the story you should know about cobblestones in Rome.

Beautiful but problematic – Cobblestones in Rome

The Sampietrini in Rome get slippery they can be uncomfortable and noisy to drive on. This is due to their irregular shape. Also, they need a lot of maintenance. In fact, the cubes are not fixed into the ground with cement or any other bonding agent. Instead, they are, simply hammered into a sand-bed. If you’ve ever been to Rome, and you had to take the bus, you might have also noticed the sound the bus gives on cobblestones. It’s like it is trying to fall apart. So basically using vehicles on these streets is actually damaging the vehicles as well.

Nowadays, Sampietrini in Rome are being largely replaced, but they are still used in slow traffic areas. You can find them in the historical center and in areas such as Trastevere. Surely, they remain a part of Roman culture.

An interesting note: the basalt cubes also pave the streets of Bologna in Emilia-Romagna. Only, here people call them Bolognini. It’s really common in all Emilia-Romagna, in towns like Ferrara and Piacenza too. To be fair, you can see cobblestone streets in every city in Italy. In Brera Design District in Milan, as well as in the historic center of Verona, or south in Taormina. Cobblestones are part of the Italian culture, therefor they’re to be found everywhere!