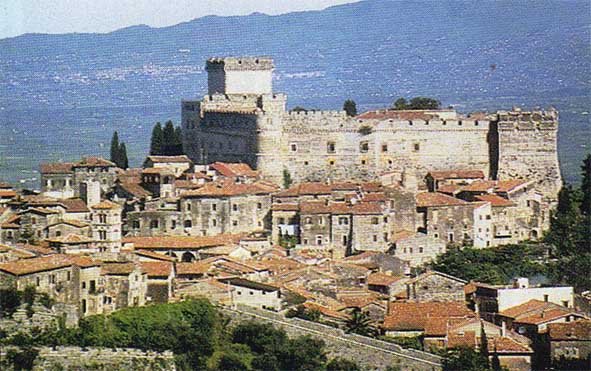 The Caetani Castle of Sermoneta Italy was built for the Annibaldi family in the early 13th Century. Designed as a military fortress, the castle served at the time as a bastion of strategic importance between Naples and Rome, though it also served as a noble house in its earliest years. The castle’s outer walls are as thick as 3 meters in places and the entire structure is embedded in solid rock. Dominating the center of Sermoneta, the castle is quite large and well preserved, and visitors can easily take guided tours.

In 1297, the territories of San Donato, Bassano, and Sermoneta were sold to the Annibaldi family for the mere sum of 140 gold florins. The family spared no expense to make the castle a true military fortress for the region and several new buildings were constructed, along with five encircling rock walls and several drawbridges, ensuring the tower could be isolated in case of an enemy attack.

Sermoneta experienced its greatest splendor in the 15th Century under the rule of Onorato Caetani III. Onorato was an active, energetic man and proved it in the field at the Battle of Lepanto, but when Alexander VI was elected Pope in 1499, he excommunicated Caetini, confiscating all of the family estates and handing them over to Lucrezia, his daughter. It wasn’t until the 19th century that the castle was returned to Gelasius Caetani.
In the meantime, the castle underwent several renovations.

The core of the Caetani Castle is designed around the living quarters of the family patriarch. The quarters served as the last place of refuge in case of an invasion and were totally independent of the rest of the castle, connected to the adjacent structures by only two wooden drawbridges. In the main tower of Caetani Castle, the poster bed of the Lord of the family is still very well preserved. The Borgia who owned the castle due to Pope Alexander VI’s intervention completed the construction of the castle’s fortifications and the manor itself, including the citadel.

The castle’s much smaller second tower, built later than its larger predecessor, is located in close proximity to the first, and both overlook a large parade ground just outside. The family demolished many of the castle’s buildings over the years, in part to make room for the famous Hall of Barons. The Hall has then modified in the 15th Century and then yet again in the 19th century.

The Hall of Barons has three guest rooms, two of which were painted by an unknown artist from the Pinturicchio School. The images in these rooms represent various mythological figures. In the 15th Century, the building was redesigned by Cardinal Valentino Borgia, installing the beautiful Madonna with Child and Saints Stephen, Peter and, John the Baptist in 1541, all painted by Jerome Siciolante who had been exhibited earlier in Abbey Valvisciolo.  All this important artwork is still very well preserved and now sits in the main hall of the castle.

In 1452, the castle was home to Frederick II, and in 1536 it served as the primary residence of Lucrezia Borgia and Charles V. Other prominent guests and residents over the years included Pope Sixtus V and Pope Gregory XIII. Traces of these various guests were maintained in a single room where entries had been recorded and preserved on the walls, and these traces are still well-preserved and can be seen to this day.

Over the years the fort was attacked several times, and in 1944, during the Battle of Anzio in the Second World War, the family was forced to abandon the castle and flee the Pontine Plain.

The castle in Sermoneta, Italy today

Apart from the guided tours, run by the Roffredo Caetani Foundation, the Caetani castle also serves as the venue for several of the region’s cultural events. Scholars and artists inhabit the castle every year, even today, and several exhibitions related to the castle and its artwork are organized each year. During the summer months a Festival of Music, begun by Lelia Caetani, the last heir of the family, along with her husband Hubert Howard, takes place in the castle. The festival started in 1963 and is dedicated to the memory of Roffredo Caetani. Several other important events also take place in the castle, all related to urban planning, sociology, and architecture.

The castle has been the venue for several movies, including “We Can Only Weep”. Also, several local legends talk of the spirit of a small child which haunts the castle, especially the basement. It is said that the child died violently in the basement, and many think it is the spirit of a prince whose portrait is hung in the Cardinal Room. The identity of the prince is still unknown. Tourists can visit the castle all through the year and it remains open every day of the week, except Thursdays.