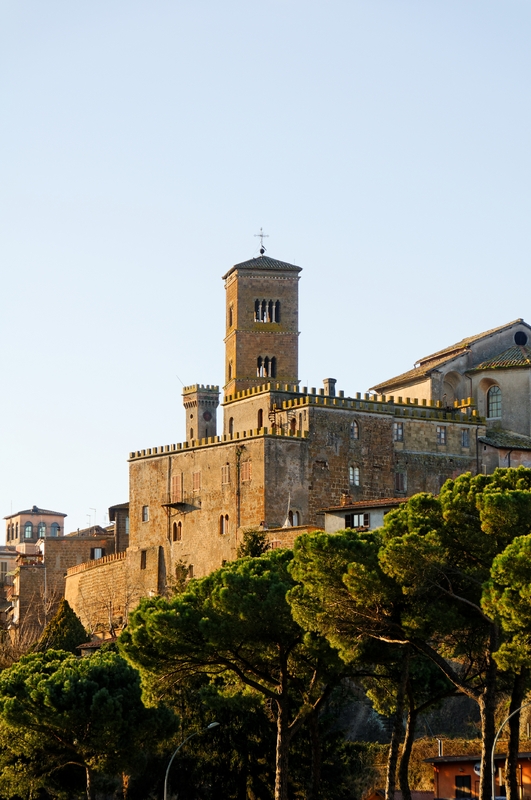 Sutri is a small town located in the region of Lazio in Italy. Sutri is located in the province of Viterbo and is located close to Rome and Viterbo. The town is located on a narrow tuff rock and is located on the famous Via Cassia road. The history of Sutri goes back to the Etruscan times when it was conquered due to its strategic location. Sutri was later handed over to the Romans; many Roman ruins still exist in the city today.

Sutri is spread out over an area of 60 sq km and has a population of close to 6200. The town has mainly been attracting tourists due to its ancient remains and monuments.

The Roman amphitheater is the most visited place in Sutri and one of the oldest remaining in town. The large theater is made from a tuff rock and it is believed that it dates back to the 1st century BC, although it cannot be said for sure. Due to its layout and design, it is believed that the theater must have been used for standing and watching the processions rather than sitting. The amphitheater is now rarely used for public events and is mostly only for the tourists to explore.

The Santa Maria Del Parto is one of the most important religious places in Sutri. In ancient times a mithraeum was a place where the followers of Mithraism used to worship. In most places a mithraeum is built to resemble the cave where the saint had once slain a bull. The mitraeum at Sutri is believed to be dating back to the Etruscan times and was originally a tomb before it began to be considered as a place of worship during the rule of the Romans in Sutri. During the middle ages the mithraeum had been converted into a church and is still one of the most religious places in the area. The history of the location and its religious importance makes it very widely visited by the tourists that come to Sutra. The present structure is a Duomo dedicated to Santa Maria where the mithareum has been incorporated into the crypt of the cathedral. The cathedral has a Romanesque structure and the interior has been lavishly decorated.

Sutri is located quite close to Rome and Viterbo. Sutri falls on the Via Cassia which connects Rome to Viterbo. Visitors can get a bus to the town from either of these cities from the main bus stations. Buses generally leave for Sutri every few hours and the tickets are easily available, except for in the peak tourist seasons. The town is also connected to the other smaller villages and towns in the province through the bus network. The easiest way is to drive down to town from Rome or Viterbo, the Via Cassia is a very pleasant road to drive down.

Sutri is a very small town; there are only a few places to visit in town which are the ancient ruins that are located close to the center of the town. Those who have their own cars can easily drive around the town since the streets here are not congested with traffic. Exploring the town on foot is also quite enjoyable and easy since the streets are not very crowded. Visitors can also rent a scooter or a moped to use while they are in town. But generally, renting a scooter is not required since there are only a few places to visit.

Although Sutri is quite an important tourist destination there are only a few hotels and Bed & Breakfasts. This is mainly because of its proximity to Viterbo and Rome, most people visit Sutri as a day excursion while they are travelling on the Via Cassia. Rome is located quite close by, so visitors can also stay in Rome and come to Sutri during the day. Nevertheless, there are some interesting accommodation options in Sutri. Two of the most well known hotels are La Stalla delle Zie and Relais Torre del Piancastagno. Borgo di Sutri is a four star hotel and has quite beautiful rooms and good facilities. The hotel is in fact located just outside Sutri, on Via Cassia. Most visitors who are travelling on the Via Cassia stay at II Borgo di Sutri for the night.

There are quite a lot of good restaurants and pizzerias in Sutri, mainly preferred by the locals. The restaurants in town are quite small and have a family like atmosphere. The food served is mostly Italian and traditional dishes that are well known in this region. Some of the well known places in Sutri that are popular among the locals are La Locanda Di Saturno di Faraoni Marisa, Il Localetto, Ristorante Sfera d’Oro, Osteria il Mitreo and Ristorante Vescovado. Other than these, there are a few bars and cafes in town where light pasta dishes and appetizers are available. Lo Stregatto is a great place for an afternoon snack.

There are only a few places in Sutri where visitors can shop. Most shops that are located close to the main attractions and the Roman amphitheater all sell items that are extremely costly since these are directed towards tourism. The older section of the town has local markets and small shops where the residents of Sutri do most of the shopping. Those who want to shop in Sutri can opt for a bottle of wine or olive oil.