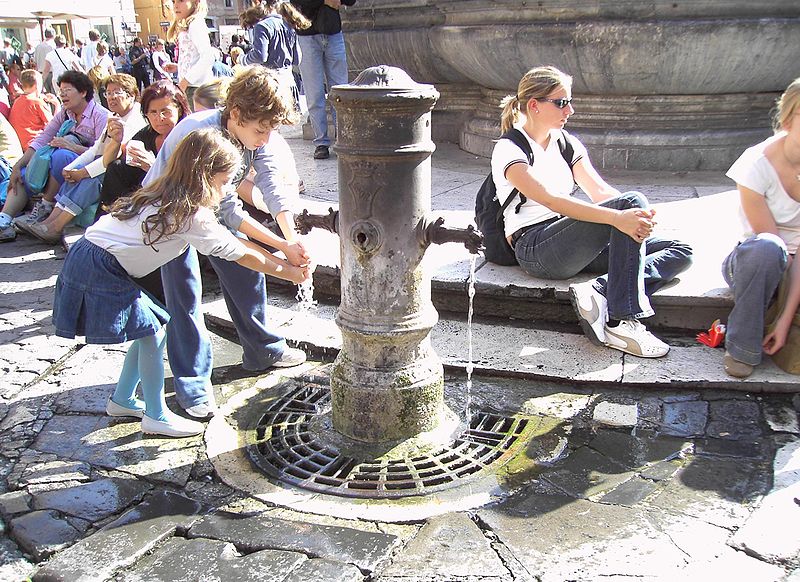 In the world today few things are free, water included, the definitive gift from nature. Many are familiar with famous fountains in Rome, but few seem to realize that the water coming from the fountains is not only free but clean and drinkable. If you’ve been wondering if is it safe to drink from fountains in Rome, the answer is yes! So, when you’re in Rome be sure to take a sip from the waters of the Eternal City!

The Nasoni – fountains in Rome – A Draw for Tourists

The capital of Italy and one of its most populous cities, Rome has been a center of power and influence throughout its history. From before Julius Caesar and through to the papal rule of the Renaissance, Rome has influenced the world and contributed in areas from art to architecture. The city is well known as a tourist destination and is easily in the top five of Must-See Cities on many people’s lists. Rome draws millions each year who flock to see buildings, statues, museums, art galleries, and ancient structures. Not to mention the food! Fountains can be found everywhere in the city and while some are world-famous like the Fontana di Trevi, others are often overlooked despite being such an important part of the city’s history.

History of Water in Rome

Rome’s fountains are both beautiful and practical. Carved by world-renowned sculptors they were used to bring essential water into the city for citizens to share. In 98 AD the Roman consul was first termed as guardian of the city’s water supply and from then on providing water to its people has been part of Rome’s job. At the time Rome had nine aqueducts that provided water to thirty-nine monumental fountains, 591 public basins, and an array of royal villas. The degree of sophistication seen in ancient Rome’s water supply system is astounding. After Rome fell the aqueducts were damaged and were reconstructed in the 17th and 18th centuries.

Is it safe to drink from fountains in Rome?

In modern-day Rome you can find around 2,500 public fountains which are called nasoni (big noses). While many don’t realize it, these fountains contain clean water that is safe for drinking. This is the exact same water that comes out of the taps of Rome’s houses, so if you’re touring the Eternal City on a hot summer day there is no reason to buy bottled water, just stop at a fountain! The first nasone was created in 1874 when only twenty of these fountains could be found in the city. If you’re in Rome any tour guide or local should be able to point you in the direction of a nasone.

In appearance, the nasoni are different from your typical fountain. They are much smaller and many believe them to be less attractive than Rome’s usual over-the-top fountains. The nasoni are round and stout, made of cast iron, stand about three feet tall, and produce chilled fresh water. On each nasone you will find the initials S.P.Q.R. stamped, which stands for Senatus Populous Romanus (Senate and People of Rome), and can also be seen on the city’s sewer grates. The water for the nasoni comes from a huge reservoir in Peschiera which runs approximately seventy miles of channels before emerging from the spout of a city fountain.

The fountain system is environmentally friendly because the constantly running water is recycled and not wasted. Some nasoni even have a button that needs to be pushed in order to get your drinking water.

If you have trouble finding one of these fountains in the city try area.it website, which provides maps of nasoni in Rome. You can also use Google Maps to find nasoni in the city.