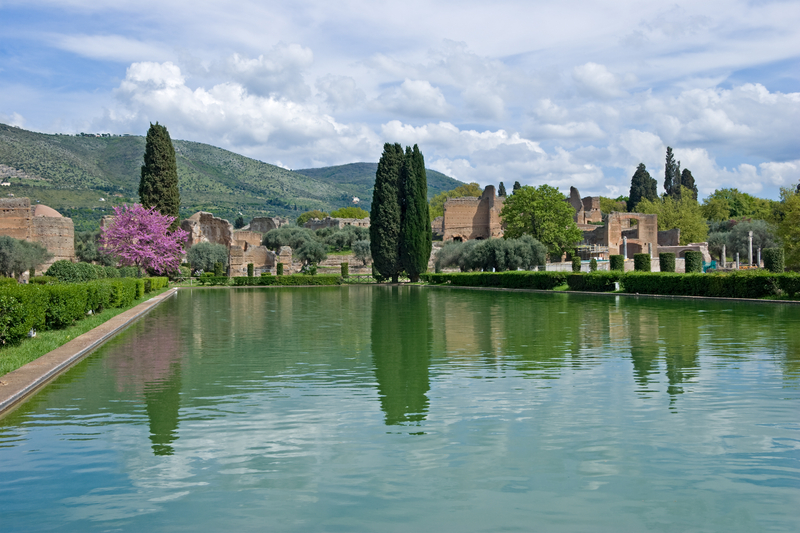 Villa Adriana is a unique complex of beautiful buildings, constructed in the 2nd century A.D. by the Roman emperor Hadrian, as a getaway from his palace on the Palatine Hill in Rome. The villa brings together the best architectural elements from diverse ancient cultures such as Rome, Greece and Egypt. The complex was built as Hadrian’s version of the perfect city.

The Villa is open to visitors and it is possible to experience the beautiful setting and diverse forms of architecture. The most noteworthy feature of the villa is the constant use of curves in place of the angular shapes which were most commonly chosen in ancient architecture.

The villa was constructed at Tivoli, then known as Tibur, in the early 2nd century. The emperor had grown to dislike his Palatine Hill palace in Rome, which led to the construction of the villa. During the last years of Hadrian’s rule, he actually governed the empire from this villa. A large court lived at the villa permanently and there was also a postal service that connected the villa, and the emperor, to Rome.

After Hadrian died, the villa was used by many of his successors. Following the fall of the Roman Empire,  it fell into disuse. Several centuries later, Cardinal Ippolito II d’Este took many of the statues from the Villa Adriana to decorate his own villa nearby (Villa d’Este).

Architecture of the Villa

The villa was originally a complex of more than 30 buildings and most parts of this complex have still not been excavated. The villa’s garden was known as one of the best Roman examples of an Alexandrian garden. The villa’s complex also included various palaces, theaters, temples, thermal baths, libraries, sleeping quarters and staterooms.

The villa showcases elements from different architectural and cultural genres, mainly Roman, Egyptian and Greek. Hadrian was well versed with the trends and developments in other parts of the world and used inspirations from other cultures to add to the design of his one-of-a-kind villa.

A beautiful Greek theater can be found in the complex, which was constructed using a classic ionic style. The main buildings have domes, and the arches in various other buildings showcase beautiful and traditional Roman architectural elements. The Emperor’s biography states that many parts of the villa were even named after the places that he had visited in his travels. Only a few of the places mentioned in the book have been found in the ruins.

Most of the artifacts have been shifted to Rome for their restoration and preservation. Visitors can see these artifacts at the Musei Vaticani or Musei Capitolini.  Several artifacts were also excavated during the 18th century by various antiquities dealers such as Gavin Hamilton and Piranesi, who sold them off to high profile tourists like Charles Towneley. Some of the most famous art works from the villa are the Old Centaur and Young Centaur, Capitoline Antinous, Crouching Venus, Diana of Versailles, Discobolus and a copy of the beautiful Hellenistic mosaic, Dove Basin.

Hadrian’s Villa was declared a world heritage site by UNESCO in 1999 and it is known to be an important archeological and cultural site. Together with the Villa d’Este, it is also a popular tourist destination for visitors to Tivoli. In 2006, the villa was placed on the list of 100 most endangered locations due to the rapid destruction of the precious ruins of Hadrian’s palace.