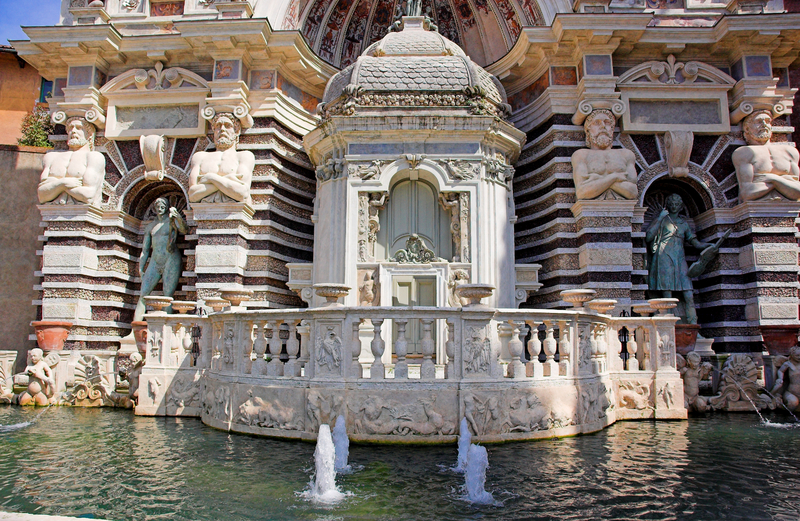 Stepping onto the grounds of the Villa d’Este in Tivoli is like taking a trip back in time. The gorgeous complex, totally reimagined under the ownership of Cardinal Ippolito II d’Este in the 16th century, is a testament to the ingenuity and beauty that were hallmarks of the Renaissance period.

History of the Villa d’Este

Ippolito II, the grandson of Pope Alexander VI and the son of the infamous Lucrezia Borgia, was gifted the Villa upon assuming the governship of Tivoli. Ippolito then employed Pirro Ligorio and Alberto Galvani, a noted architect and engineer, to bring the villa to glorious life. The garden and water features created for the villa were so revolutionary that they were copied all over Europe for the next several decades.

Much inspiration was taken from the nearby Villa Adriana, a retreat of the Roman Emperor Hadrian, not to mention marble and statues. Ligorio, who was also responsible for the inside frescoes, also created the layouts for the now famous Villa d’Este gardens. Working alongside Tommaso Chiruchi in creating the fountains, Ligorio created a landscape design that impacted Europe quite significantly. Visiting the villa today one can’t help but be impressed with the genius and creativity of these men of the Renaissance and what they were able to create.

In the 18th century the villa passed into the hands of the Hapsburgs through marriage and eventually fell into disuse. The Italian government purchased the villa at the end of World War I, restored it, and furnished it with several paintings from the Galleria Nazionale in Rome.

Architecture of the Villa

The Villa is surrounded on all three sides by a 16th century courtyard that once belonged to a Benedictine cloister. To one side a glorious fountain, replete with a nymph in a grotto flanked by eagles (the symbol of the d’Este family), calls to mind the Garden of Hesperides, the blissful garden of Greek myth tended to by nymphs. In truth, the gardens of the villa do not seem so far off from this idyllic, mythical place.

The main entrance of the villa leads the way to the Old Apartment, which was constructed for Ippolito d’Este. The apartment has beautiful vaulted ceilings that boast secular frescoes by Livio Agresti. Naturally, Ippolito’s rooms have beautiful views of the gardens and a series of gorgeous terraces.

The apartment includes a library and small chapel, as well as stairs that lead to a lower set of rooms known as the Appartamento Nobile. From there the Cardinal was able to access the gravelled terrace, decorated with a dazzling triumphal arch, and the Gran Loggia.

The Gardens of the Villa

Twin staircases lead down from the villa’s garden terrace, descending into the decadent and otherwordly garden created by the Cardinal and his team. On one side of the staircase water spills out, seemingly from the Earth, but really from the Fontana del Bicchierone, rumored to have been created by Bernini. On the other side visitors can find the Grotto of Diana, which boasts dazzling frescoes and mosaics.

Anyone who visits the Villa can’t help but marvel at the meticulous planning of the garden. Built on a central axis, the garden boasts different cross-axes that keep the grounds visually interesting. The gardens are kept hydrated by more than five hundred jets in the water troughs, pools, and fountains, which are fed by the Aniene and the Rivellese spring.

After touring the inside of the villa, the Grotto and the Bicchierone fountain, the next stop for any visitor to the Villa d’Este should be a walk further down the terrace to the complex of beautiful fountains known as Little Rome. The complex provides great views of the beautiful Hundred Fountains, where jets of water fill up a rustic looking trough, as well as the Fontana dell’Ovato, designed by Pirro Ligorio himself.

One terrace leads onto the next at the spot where the Fountain of Dragons dominates the central garden space. This part of the garden was designed especially for Pope Gregory XIII’s visit to the villa in 1572. The Pope’s coat of arms, which features a dragon, decorates the fountain. Another flight of stairs leads to a wooden slope that features three fishponds in a rectangular shape. These fishponds are in the lowest level of the garden, flanked by the Fountain of Neptune and a water organ.

The wonderous villa, with its wealth of beauty and history, was named one of UNESCO’s world heritage sites in 2001.

Anyone visiting the Tivoli region would do well with arranging a stop at the beautiful Villa d’Este, one of the most luxurious and elaborate villas in Italy, its rich interiors and beautiful gardens are not to be missed.

More about the gardens at Villa d’Este here: http://www.lifeinitaly.com/tourism/lazio/villa-d-este