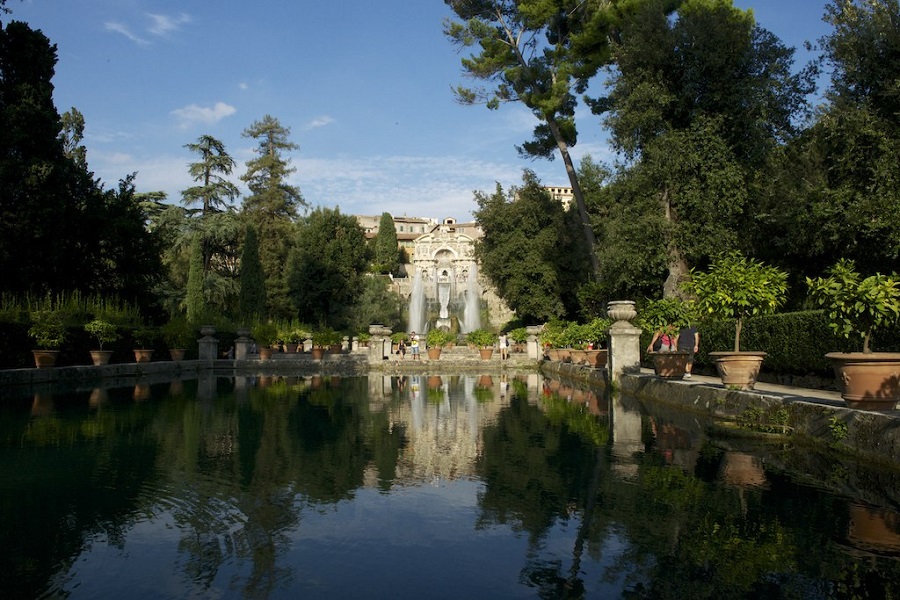 Nearly 500 years of myth and history have done nothing to dull the magic and mystery of the glorious Villa d’Este in Tivoli, the famed Tivoli water-and-wind garden, a haven for princes and lovers of the humanities, and arguably one of the most beautiful villas in all of Italy.

And that is saying much, considering the breathtaking beauty and lush design of wonderful, sprawling Italian villa gardens. Many carved from the sheer rock of Italy’s mountains, splayed with massive stone stairs, providing spectacular vistas and statuary, draped with cypress and enchanted by moving water features: the gardens of Italy are legendary.

Shrouded in the rich history of the Renaissance and its embrace of classical arts and antiquities, Villa d’Este is not comprised of a single design or focal point: its elements of the unexpected, the whimsical, the beautiful surprise are central to its style.

Without a doubt, this beautiful villa will entice you into hours of delightful exploration of its gardens, fish pools, magnificent statuary and contrived, often difficult, pathways leading you on while they draw you around and away.

Villa D’ Este: Grace and Beauty in a Living Museum

After five centuries, Villa d’Este’s allure is undiminished, due in part to its ageless grace and beauty, and in part to its captivating symbolism. Nothing in design or element is without meaning in Villa d’Este, and much of the meaning relates to the history of ancient Rome, the Renaissance’s revival of that history, and the political struggles within the Church of Rome during the 16th century.

Villa d’Este was developed as a living museum and repository of classical beauty by the immensely wealthy, highly cultured and often ostentatious Cardinal Ippolito of d’Este. The son of the infamous Lucretia Borgia, Ippolito suffered a bitter disappointment when he failed to become Pope after a lengthy conclave.

Exiled to the turbulent Tiber region, he sought solace in the creation of a magnificent garden he believed worthy of the already-ancient city of Tivoli. Art historians say this Renaissance patron of the arts immersed himself entirely in this effort that spanned more than two decades, bringing  forth some of the most amazing and intricate engineering feats of the century.

Time has eroded some of the garden’s features, frescoes and even its famous statue of Hercules. But the entire Villa has witnessed a rebirth of its own in recent years, as art and music patrons have sought to restore what was once called “the Garden of Miracles” to its former glory.

Even the 2,000-year-old technology that gave life to the magical Fountain of the Water Organ has been recreated, and Liszt’s 19th-century compositional tribute to the Fountain once again flows from those legendary pipes.

Fountain of the Dragon in Villa D’ Este

At the garden’s very epicenter is the fabulous, almost mystical Fountain of the Dragon. You’ll find the four-dragonhead spouting fountain in a cave-like recess set between two steep stairways and two hand-hewn pools in the shapes of shells and dolphins. In ancient times, water – a key element in Italy’s villa gardens – poured down from above, contributing to a spine-chilling roar that appeared to come from the dragon’s lair.

It’s here that the garden’s architect, Pirro Ligorio, devised a tribute to the hero of Tivoli, Hercules, at the same time providing a Renaissance lesson in morality and free will. You will struggle with the gateway staircase to the Fountain, a stony and steep pathway deliberately difficult, as its designer chose to depict Hercules’ monumental struggles between virtue and vice.

Here, if you simply look for them, you can also find the objects of Hercules’ affections. The proverbial fork in the road is, in fact, a fork in the grotto stair-path. One road leads to Venus, the other to Diana.

The Avenue of One Hundred Fountains in Villa d’Este

And who can resist any place called the Avenue of the Hundred Fountains? This ancient pathway at Villa d’Este was a glorious confluence of stone and water, leading visitors toward the famous Fountain of Tivoli. In its day, its fabulous hand-carved fountainheads – of sailing ships, classic Grecian urns and animal heads, all designed to evoke awe and dread – lined both sides of the avenue. Their waterspouts were intended to represent a symbolic stream of water, a convergence of three Italian rivers that flowered collectively into the nearby, life-nourishing Tiber.

Fountain of the Water Organ in Villa D’ Este

No description of Villa d’Este is complete without mention of the famous Water Organ Fountain. It’s said that the hydraulic-pneumatic technology that made this water-and-air-powered musical fountain possible in the 16th century actually dates back to 1st-century Alexandria.

Whatever its origins, the magnificently arched and pedimented fountain was the wonder of its era, replete with statuary of Diana, Apollo and other wondrous carvings, loops and arches.

But the inevitable passage of time produced severe changes in the functionality of the water pipes; calcification destroyed the lyrical musical tones that once replicated the haunting tunes of birdsong and windsong. As lovely and imposing as the Water Organ Fountain is, it remains today a mere gateway to even more lovely paths and garden structures at Villa d’Este.

Its decline into silence, more than 100 years ago, was deeply felt among art historians and musicologists. But after a century-long sleep, the Water Organ Fountain sings again, thanks to craftsmen and organ specialists from Great Britain who – without the benefit of the original pipe designs –essentially recreated the Fountain in model form, in order to discover its musical secrets.

How to get to Tivoli

Villa d’Este is near Piazza Garibaldi in the old town centre of Tivoli, at about 30 km from Rome. You can easily get there by car, bus or train.

If you drive to Tivoli, take the motorway A24 and exit Tivoli, or take the Tiburtina road from Rome.

You can also arrive by train. The station “Tivoli” is on the route Roma-Pescara.

There are also buses from Rome to Tivoli (Cotral); in Rome the bus leaves from the underground station Ponte Mammolo and arrives in Tivoli at Largo Nazioni Unite.

Edith Wharton once wrote that an Italian garden “does not exist for its flowers; its flowers exist for it.” This is certainly true of Villa d’Este, which needs no ornamentation to define or enhance its beauty.