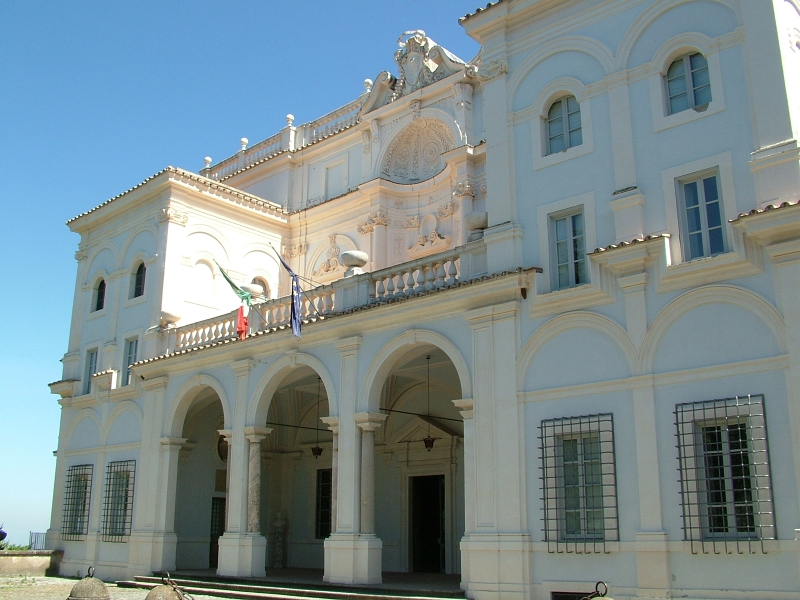 Also known as the ‘Rufina‘, Villa Falconieri is the most ancient of the villas built in Frascati, Italy. It is believed that it was built on pre-existing Roman villa remains, owned by the roman consul Gabinio and the Cuisine and Quintili families. The construction was begun by Alessandro Ruffini, bishop of Melfi (a town in the Basilicata Region), between 1548 and 1574, and was finished by bishop Alessandro Farnese, who later became Pope Paul III, that around 1520 was Bishop in the Tuscolana area; Farnese decided to complete the construction of the villa because he considered Frascati in a strategic position over Rome. Let’s learn more about Villa Falconieri in Frascati, Italy.

Once he became Pope, Paul III renamed Frascati with its original name: Tuscolo. He began significant restoration and embellishment works, commissioning architect Antonio da San Gallo il Giovane.
Between 1540 and 1549 the villa was built in a monumental style, under the supervision of Jacopo Meleghino.

That same year, the Pope had three commemorative medals made, concerning the reconstruction of Frascati and the villa Rufina. In the following years, the building underwent further embellishments and works by famous painters; furthermore, in 1555, a water system was constructed, carrying water from the various local springs. A note: the gardens house a small lake surrounded by cypresses, that according to rumors inspired the many love-related suicides that occurred around the area.

In 1563, choked by debts, the Ruffini family had to sell the villa. From then on the estate has been passed in the hands of some Roman noble families: Cenci, Sforza, Gonzaga, and Montalto, modifying its looks and adding a new building (1620). In 1628, the villa was bought by Orazio Falcinieri, a Florentine nobleman, who kept it until 1865. No major works were made until his son, Orazio, had major restorations of the building done. Even the famous architect Borromini had participated in the construction of Villa Falconieri, especially in planning the gardens and the park. The works are known to have been definitely completed in 1668 by Francesco Massari, Borromini’s assistant.

The Falconieri family ceased to exist in 1865 and the villa was, thus, inherited by count Luigi Carpegna who sold it in 1883, in terrible abandoned conditions, to princess Elisabetta Aldobrandini Lancellotti. In 1895, she sold it to the Trappists Friars, who lived there without making any major up keepings, especially to the gardens which turned into marshes thus favoring the malaria growth.

During WW 1, it was confiscated by the Italian government which kept it as ‘war damage’ refund.

Between 1925 and 1928, it was turned into the general headquarters of the Ministry of Fine Arts and, for a little period of time, it became the Ministry of Foreign Affairs, then into the International Educational Cinematography Institute until 1941.

In 1943 the villa was turned into the German Occupation Army headquarters; during the period of the occupation, the villa suffered further degrading, which worsened the already bad shape in which the villa found itself. State property again, in 1945, it had to wait until 1959 to see its restoration, and rebuilding of the damaged sections accomplished.

Between 1960 and 1979 the villa was the seat of the CEE (European Education Centre); now it is an educational government-runned institute (CEDE). If you’re looking for charming villas in Castelli Romani, Villa Falconieri in Frascati, Italy is a must-see!

Villa Muti in Grottaferrata, Italy dates its origins way back to 1579. It was built upon request of monsignor Cesaroli, in 1595 the villa was given to monsignor Pompeo Arrigoni, an auditor of the Sacra Rota (the Vatican’s Court of Law) who was elevated to cardinal the following year. Arrigoni wanted a building that stood simple but severe at the same time. He also gave a great deal of attention in planning the surrounding landscape, especially the gardens.

As with some other villas, this one was erected on an old roman structure: the villa of Marco Petronius Onorato, a Roman knight. When cardinal Arrigoni passed away, the estate was divided into two parts (1629): one went to monsignor Diomede Varesi, and the other to monsignor Ciriaco Rocci.

In 1802 monsignor Angelo Cesarini, owner of part of the structure, received important visitors at the villa, such as Pope Pius VII, the king of Sardinia Carlo Emanuele IV, and the cardinal-bishop of Frascati. After this period, the villa returned to be owned by one single person, Achille Muti-Bassi.

Not to be missed, in the villa, are the frescoes of major artists of the Barocco (Baroque) style, such as Giovanni Lanfranco, Pietro da Cortona, Ludovico Cigoli, and Domenico Passignano, all dating from the 16th century, and the beautiful surrounding English-park, very large and very well kept, adorned with fantastic sculpture, typical of the Manierismo style. Unfortunately, this villa, now owned by a real estate company, is not open to the public.

Today an Institute belonging to the Salesian priests – Istituto Salesiano Villa Sora – Villa Sora in Frascati, Italy was built toward the mid of the XIVth century by the Moroni family, and considered to be one of the oldest in the world.

Villa Sora in Frascati, Italy is also known as the Pope’s Villa, since, in 1582, it gave hospitality to Pope Gregorius XIII and cardinal, and future Saint, Carlo Borromeo.

In 1600, the villa was sold by the Moroni to Giacomo Boncompagni, son of Pope Gregorius XIII and marquis of Sora (a city in the Lazio region). The estate remained the property of the Boncompagni family until 1896, when it was sold to Tommaso Saulini who, after a few years, sold it to the Salesiani fathers.

The original site was made up of a building with a central courtyard, a belvedere tower facing north, with a gorgeous look of Rome, and a smaller tower facing east. The architect is unknown, and there is little left of the original walls since it was bombed in 1944. Only the façade and some internal walls, the central lounge, and a small chapel, were recovered through a thorough work of restoration.

The ‘Sala Zuccari’ lounge has frescoes and decorations made by Federico Zuccari, a noted painter who lived in the XVI century and, also, a small monument stands in the villa’s premises as a reminder of all the people who died in the bombings during WWII. So these are some of the Villas in Castelli Romani that are worth visiting. First the More about Villa Falconieri in Frascati, then the Villa Muti in Grottaferrata, and the Villa Sora in Frascati, Italy.

Villas of the Castelli Romani Part 1

Villas of the Castelli Romani Part 3

Villas of the Castelli Romani Part 4