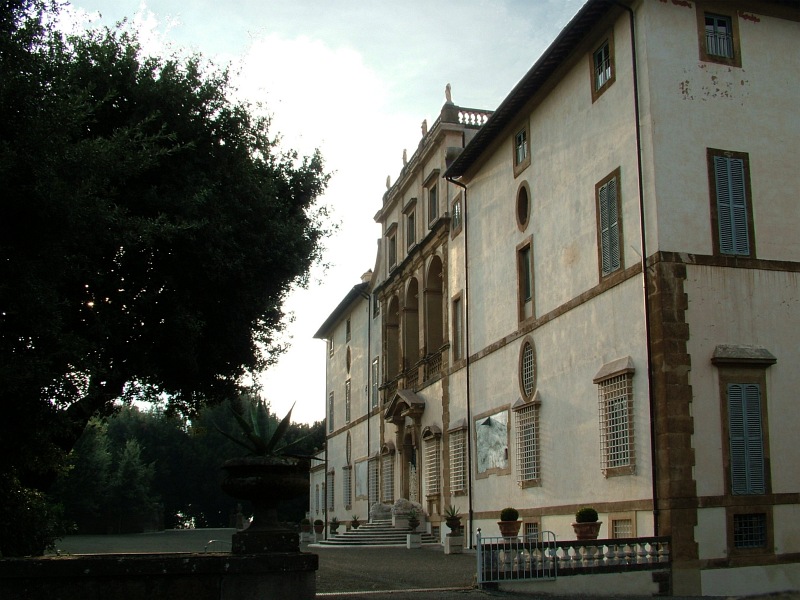 We’re discussing even more villas of the Castelli Romani area now. At this time, you can learn about Villa Tuscolana in Frascati, as well as Villa Torlonia and Villa Lancellotti also in Frascati, Italy. Explore the beautiful villas in Castelli Romani in the Lazio region, Italy.

Villa Tuscolana is also known as ‘Villa Rufinella‘, named after cardinal Ruffini, who created the estate, in 1587.
Going through many owners, the villa changed its looks, becoming in 1773 an estate belonging to the ‘Camera Apostolica’, an equivalent, at the times, of the Vatican Bank. The way it looks today is due to architect Luigi Vanvitelli, who was commissioned, for the job, by the Jesuit Order.

Villa Tuscolana in Frascati was sold by Pope Pius VII to Luciano Bonaparte, who started archaeological diggings in the estate and in the Tusculum area; most of the artifacts found here were sent to the museums in Paris.

A NOTE: At the time, a famous local bandit tried to kidnap prince Luciano Bonaparte while partying in the villa’s gardens. The price was saved by a fast-thinking butler who, dressed up as the prince, took his place… no one knows what happened to the butler!

In 1820, a princess from the Savoia family (the Savoia were still ruling Italy during WWII) inherited the estate which she held until 1824, commissioning Luigi Biondi for the supervision on the Tuscolo hill.
In 1834, the famous Italian poet Giuseppe Gioachino Belli (Piazza Gioacchino Belli stands in Rome right before Ponte Garibaldi) has been a frequent guest of the estate, and wrote a poem, about the villa, called: ‘La Ruffinella’.

Under the supervision of architect Luigi Canina, the archaeological excavations proceed in the villa and, consequently, on the Tuscolo hill. All the findings were then transferred to the castle of Aglià, in the region of Piedmont.

After 1849, the Villa Tuscolana in Frascati became the property of king Vittorio Emanuele II, who again sold it, in 1872, to the Aldobrandini-Lancellotti family (remaining, after a while, only to the Lancellotti family). During WWII the villa was unfortunately damaged by the bombings. Being restored, it is now owned by the Order of the Salesiani Priests. It now houses 7 conference halls, 100 bedrooms, and a very elegant restaurant… I guess we have to keep up with modern times!!

Annibal Caro, a famous Italian writer, bought a piece of land from the Grottaferrata Abbey, quite close to Frascati, on which he erected a Villa. He named it: ‘Caravilla’. Here he worked on his famous translations from Latin, until his death occurred in 1566. The architect he commissioned to build the villa was Nanni di Baccio Bigio, who, in many years, developed and followed all the structural changes and add-ons concerning the estate.

The Cenci family bought the estate in 1579, who passed it on to cardinal Tolomeo Galli, who (as usual!) sold it to, in 1606, cardinal Scipione Borghese the, before mentioned, nephew of Pope Paul V. The Borghese family, in order not to be less than the other families in the neighborhood, committed themselves with a huge amount of restoring works, commissioning architect Flaminio Ponzo to take over the task. Again, it was subsequently bought by duke Giovanni Angelo Altemps who passed it down to Pope Gregorius XV’s nephew.

Villa Torlonia became the Pope’s favorite villa, in which he used to spend most of his free time. Architect Carlo Maderno was summoned to restore the old compound, thus, in 1622, all the ancient artifacts found during the excavations, about 50 pieces, were taken to Villa Ludovisi, in Rome, which later became a Roman museum.

In 1661, Pompeo Colonna bought the villa, later inherited by Lucrezia Colonna who donated it, in 1680, to the Conti’s family; in 1841 the villa was again sold to the Torlonia family. In all this buying and selling business, the various families actually added art pieces of extraordinary beauty that can still be viewed in present days.

During the WWII bombings, the villa suffered extensive damages so that it had to be completely demolished, giving space to a residential building area, while the gardens became a public park, thanks to the transaction between the Frascati’s city hall and duke Andrea Torlonia. The duke got an estate and, the city hall, the villa’s park. Beyond Villa Tuscolana in Frascati, and Villa Torlonia, we’ll discuss another one now, Villa Lancellotti!

Today is known as Piccolomini-Lancellotti, the Villa Lancellotti was initially known as Villa Bonami, named after its first owner. The layout, dated 1578, showed a project for a three stories building, each having three rooms.
It was mainly built to shelter the congregation of the Oratoriani fathers but, in 1595, the fathers decided to rent it to cardinal Alfonso Visconti who enlarged and transformed the building, upgrading it from ‘house’ to ‘palace’, having a three-arched veranda, and two opposite and identical wings, housing six rooms each, decorated with frescoes by Cherubino Alberti. With the death of cardinal Visconti, in 1608, the works were interrupted, and the villa was cheaply sold, to cardinal Mario Mattei. Cardinal Mattei also acquired the St. Michael Archangel Chapel and the ‘House of the Baronio’.

The complex was sold in 1617 to cardinal Ferdinando Gonzaga, who, too busy to enjoy the villa’s beauty, sold it the same year to Roberto Prini, a banker from Pisa. Prini’s daughter married Silvio Piccolomini who, in the mid 700’s, made a large-scale restoration. The entrance portal and the windows, in baroque style, were modified and a double monumental stairway was built.

An Italian-style garden  –  not big, but very elegant  –  with a water theatre, was created. Baron Piccolomini sold the estate, in 1840, to Franco de Mehlen, secretary of the Bavarian delegation in Rome, who again, sold it to Elisabetta Borghese-Aldobrandini, wife of Filippo Massimo Lancelloti. From then on, the villa took, and kept, the name of ‘Villa Lancellotti’; it was enriched with sculptures, taken from the archaeological diggings of the Tusculum, pictorial decorations, and carvings. In 1872, the princess also bought the villa ‘Ruffinella’ connecting it to villa Lancellotti by means of pathways, a bridge, and a portal, dedicated to her husband, prince Lancellotti.

Today the Villa Lancellotti is still owned by the Lancellotti family, and unfortunately, is not open to the public.

So these are the villas of Castelli Romani you should know about. Villa Tuscolana in Frascati, Villa Torlonia and Villa Lancellotti also in Frascati, Italy.

Read more about the villas of Castelli Romani

Villas of the Castelli Romani, part 2 (Falconieri, Muti and Sora)

Villas of the Castelli Romani, part 3 (Borghese and Grazioli)