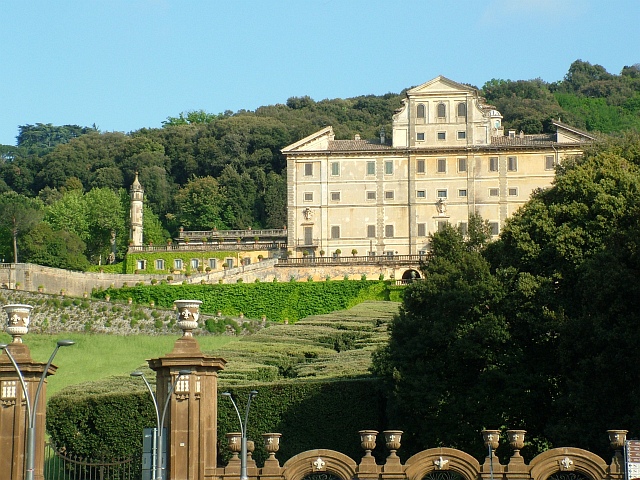 Once called “Villa Belvedere“, Villa Aldobrandini in Frascati is one of the most magnificent Villas of the Castelli Romani area.

Located beneath the Tusculum mountain, right outside the town’s dwellings, the villa has one of the most beautiful panoramic views of the countryside and Rome. Surrounded by a gorgeous park with secular plane trees, holm oaks, and pine trees, it was praised by J.W. Goethe, who had the privilege to be a guest for a period of time, during his Italian travels. Let’s discover the Villas of the Castelli Romani area.

Villas of the Castelli Romani

Villa Aldobrandini was built in the XVI century, along with other famous noble suburban residences, the villa was constructed on an existing building owned by Monsignor Alessandro Ruffini in 1550. Further expansion of what is now Villa Aldobrandini, was commissioned by Cardinal Pietro Aldobrandini, nephew of Pope Clemente VIII, to the well-known architect Giacomo della Porta. Started in 1598, the villa was completed in 1602, changing, from thereon, various owners between noble families and papacy.

In 1603 the fountains and garden layout began and, thus, also water conducts were built, while the final structural works were completed by architects Giovanni Fontana and Carlo Maderno around the year 1621.

Villa Aldobrandini is built on a series of regular shaped terraces, on one of which, the palace itself stands. The main facade still endures strong and severe-looking, according to Giacomo della Porta well-known massif style.

Beneath the two main bodies, the kitchen areas are supporting the many promenading terraces, where two column-shaped oval chimneys stand, on each side, hurling skyward. The wine cellars are located in the basement with the service quarters. Access was given, to the above levels, through a spiral staircase, or by using another stairway located directly on the back of the palace facade.

A hallway, with the chapel entrance on its side, precedes the big central lounge where rooms are located on the two sides. Needless to say that the lounge (containing the famous bronze bust of Clemente VIII Aldobrandini) and all the rooms are decorated with frescoes and paintings. The upper levels where the service crews’ apartments were. The last floor was assigned to the noblemen and their guests.

Villa Aldobrandini is a highlight of the Villas of the Castelli Romani. The oval-shaped terrace, placed right in front of the palace, was used for parties and entertainment and has large access ramps on each side. The central part of the construction extends upward and ends with a triangular recess from where the fountains and its waterworks could be seen by the noblesse.

Behind the Villa is the theatre (Teatro delle Acque), probably started by the two architects Giovanni Fontana and Carlo Maderno; the theatre is shaped like an amphitheater, with a small chapel dedicated to St. Sebastian, the patron of the Aldobrandini family.

The Villa is, today, still owned by the Aldobrandini family. Visits are regulated by the family; check out Villa Aldobrandini website for more information.

Another interesting site to visit, which belonged to the Aldobrandini family, are the stables. They were known as the “Frascatino” (small Frascati).

Now the “Scuderie Aldobrandini“, which have been restored by architect Maximilian Fukas in the year 2000, hold around-the-year shows and cultural events, besides having some permanent exhibitions, such as the archaeological museum, miniature models of the Ville Tuscolane (Tusculum Villas, scale 1:200), and an Auditorium, on the first floor, then occasionally hosts concerts and other major cultural events. Location: Piazza Marconi, 6 – Frascati.

Villa Mondragone – another of the Villas of the Castelli Romani

There’s a long history behind the construction of Villa Mondragone, another of the Villas of the Castelli Romani.

Giovanni Ricci da Montepulciano was elected cardinal in 1551. Being a Villa estimator – he had already built Villa Medici in Rome – he sold his property, still under construction, to cardinal Ranuccio Farnese. When the works were completed, Farnese names the building: Villa “Angelina“, also known as Villa Tuscolana. Upon his death, the family inherited the complex to be sold, in 1567, to a German cardinal: Mark Sittico Altemps, related to the future Pope Pius IV.

The cardinal acquired the property, excellently located near Frascati and Rome, so he could visit frequently the local Roman noblesse. To restore the Villa he called the famous architect Gregorio Barozzi, better known as the “Vignola”, who was, at the same time, the family’s favorite architect. He was also a good friend of Cardinal Ugo Boncompagni who will later become Pope Gregorius XIII and a frequent visitor of the cardinal’s estate. Loving the place, Gregorius XIII induces him to build another villa in the same area. The site was chosen for the construction also included the remains of an old Roman villa that belonged to the Quintili family.

Papal architect, Martino Longhi il Vecchio, was commissioned for the job. Between 1573 and 1575 the first nucleus of “Villa Mondragone“- the name derives from Pope Gregorius XIII family crest which shows a dragon on it – was being built, and became the destination of many important personages, gravitating around the Vatican court, who found some time to visit the Pope.

When cardinal Altemps passed away, the villa was inherited by his nephew Gian Angelo, a very cultured man who, unfortunately, cared only for his library, and not much to maintain and expand his inherited complex. In 1613, Pope Paul V acquired the villa from Gian Angelo for a very high price for those times – just about: “cash on the nail!” In 1613, the works to restore Villa Mondragone began, and more properties were added.

After 1700, the villa was mostly abandoned by the new owners: the Borghese family, prefer to reside in the smallest “Villa Taverna”, located nearby Mondragone, bought by cardinal Borghese in 1614. Since then, unto our times, the villa was abandoned and suffered some invasions and wars, besides a severe earthquake. Only recently was it bought by the University Tor Vergata of Rome and its restoration works are just about to be completed to become a standing representation of the Roman cultural institutions.

More about the Villas of the Castelli Romani here:

Villas of the Castelli Romani part 2

Villas of the Castelli Romani part 3

Villas of the Castelli Romani part 4