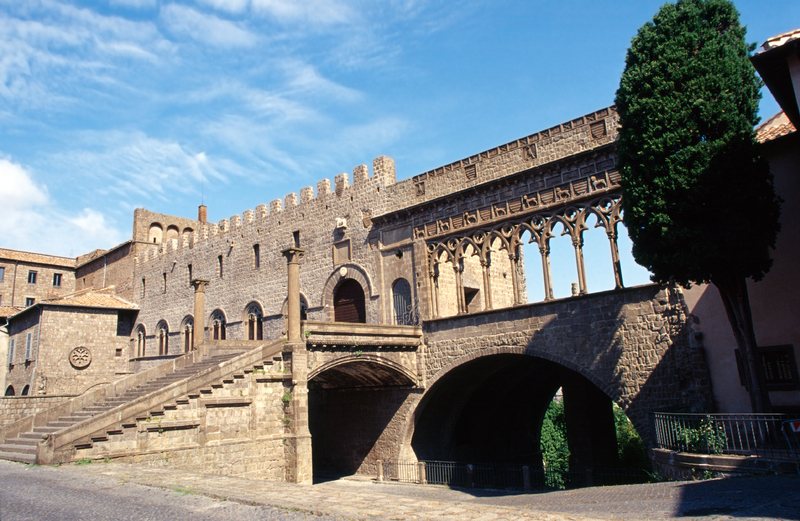 Viterbo is a city located in the Lazio region in Italy. It is situated close to Rome in a hilly landscape. The ancient quarter of the city is very well restored and quite a lot of interesting buildings and churches are located here; the entrance to the old quarter of the city is through ancient gates that were built centuries ago. The economy of Viterbo is mainly based on agriculture, however, marble, wood and pottery are also made here. Viterbo is also famous for its Fine Arts Academy and its Italian gold reserves which attract several tourists from central Italy each year.

The Palazzo dei Papi is the main attraction in the city and it was formerly the residence of the bishop. The palace was later extended for the Popes. The palace was once the papal seat and hosted six Popes; it was also the site of the first Papal conclave. This practice that started here still exists in the Vatican.

The church of San Francesco was built in the Romanesque gothic style in the 13th century and was completely destroyed in the bombings of 1944. Two mausoleums of the popes who died in the city are located here as well as the remains of Cardinal Vicedomino Vicedomini who died on the night that he was elected as pope.

The palazzo Dei Priori dates back to 1263 when it was originally built. Inside the palace is a beautiful garden with a baroque style fountain and arcades that date back to 17th century. The view from the garden is also quite beautiful. There are also a few noteworthy frescoes in the Palazzo.

The church of Santa Maria Nuova is the oldest church in the city, dating back to 1080. The church is built on the ruins of an ancient temple and there are many interesting paintings and frescoes inside that were done between the 14th and the 16th century. On the left aisle is a beautiful 1180 tryptych that is done on leather.

The castle took more than a century to build and was completed in the 15th century, only to be destroyed again in the 1944 bombings. The castle has been beautifully restored later and it now houses the national archeological museum that showcases various artifacts depicting the history of the cultures and tribes that existed in the region through the centuries. The permanent collection of the museum is quite interesting.

The two main train stations in Viterbo are located close to the center of the city. The trains that connect to Viterbo are mainly all from Rome, and trains depart almost every two hours from Rome. Apart from trains, frequent buses are also available from Rome and other towns in the region. Visitors driving down in their own car from Rome can take the A1 highway or the ring road GRA from Rome to Cassia and from there on to Viterbo.

Visitors who have their own cars can easily explore the city by car. However, the historic center of the town is not really comfortable to drive since there are many one way and pedestrian streets and several narrow lanes. It is better to explore the historic center on foot since it is much more pleasant to just walk. The public transport system here is the buses, which can be taken from any part of the city and are very inexpensive and fairly punctual. Tickets are available everywhere even at the local tobacconists and need to be purchased before boarding the bus.

Viterbo has some good hotels and Bed & Breakfasts. Since it is quite a large city, visitors need to be aware of the location of the hotel since it would be easier to explore the city if the hotel is located close to the center. There are plenty of good hotels to be found near the train station and the center of the city. There are some really expensive but luxurious hotels in the city as well as mid-range and budget hotels to look for. Some good options to consider are Country Hotel Rinaldone, Tuscia hotel, Hotel Viterbo, Mini palace hotel and Balletti Palace hotel.

Eating Out in Viterbo

Viterbo has plenty of pizzerias so the best thing to have here is Pizza. Since the main industry here is agriculture, almost hotels use fresh ingredients and local produce. There are also plenty of small restaurants that serve local Viterbo dishes which are quite rustic and simple. The cafes are also very beautiful and have delicious cappuccinos and other Italian coffees. Some great places to dine out are II Monastero, Tre Re, II Labirinto, Pizzeria San Pelligrino and café Cavour. The cheeses and wines are also very delicious, definitely recommended.

Viterbo has good options in terms of shopping. The old quarter of the city and the shopping streets are lined with small shops that are quite interesting. Viterbo is well known for its pottery, its marble products and wooden

artifacts. The best things to shop from the city would be beautiful vases and local pottery, souvenirs made from carved wood and marble souvenirs. Visitors can find plenty of shops selling these beautiful locally made products around the center of the town and in the small shops in the old quarter of the city.