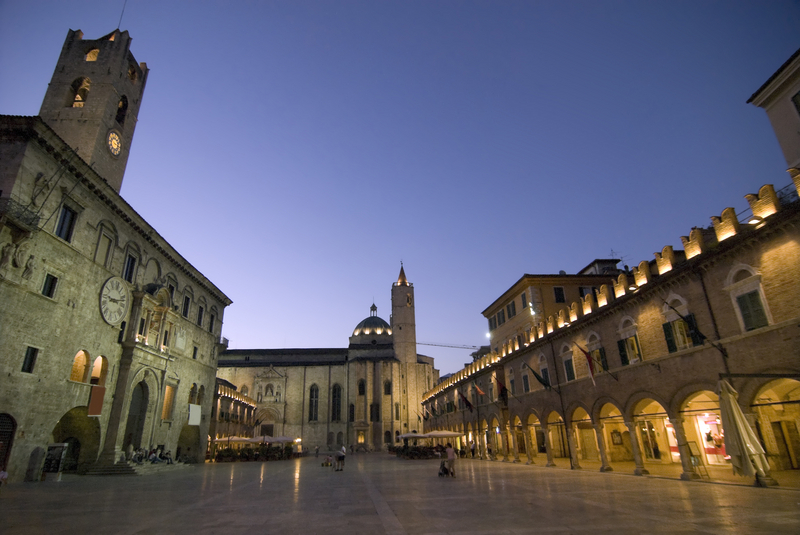 Those visiting the Marche region of Italy will be delighted with a stop in Ascoli Piceno, a town that can trace its origins back to the days before Rome and is a great source of ancient and medieval architecture. Surrounded by two national parks, this town of 54,000 is located where the Castellano Creek and River Tronto meet.

Ascoli Piceno’s dramatic cathedral is dedicated to Saint Emygdius. The architecture of the church dates back to many different periods as its structure has been worked upon several times over the centuries. Inside, visitors will find a beautiful altarpiece created by Carlo Crivelli, an artist who lived and worked in the town. The cathedral also features several other pieces of impressive art and architecture: among them Pietro Alemanno’s Madonna delle Grazie.

The construction of this Gothic-style church started in 1258 and its dome was completed in 1549. St. Francis Church is noted for its central portal –beautifully decorated in local travertine – and its monument to Pope Julius II. The Bramantesque Loggia dei Mercanti, constructed in the 16th century, is annexed to the church.

The church’s single nave, originally constructed in the 14th century, was renovated and enlarged in the 15th century to make room for two aisles. The convent today, with its rectangular façade and beautiful entry, is home to an auditorium, a contemporary art gallery, and the Town’s Library.

Inside this 13th century church, visitors will be able to see the stunning reliquary of the Holy Thorn that was gifted to the town by Philip IV of France. The side portal, added in the 16th century, was designed by Cola d’Amatrice.

The convent was once a very important cultural center and, although only two of the original cloisters remain, it is still worth a visit. The architecture is quite noteworthy and the complex is also important due to its history. Several important students, including Pope Sixtus V, were once students here.

The Palace of the People’s Captains was built in the 13th century out of three pre-existing buildings that were connected and extended. In its early days, the palazzo was the seat of the people’s captains and, later, of the Papal governors.

In the 15th century, the southern part of the building was enlarged and, in later years, additional changes were made to the building’s façade. A new portal was added that includes a monument to Pope Paul III.

Caffè Meletti in Piazza del Popolo, near the Palazzo dei Capitani, is one of the 150 Historic Cafés of Italy. The café opened at the beginning of the XX Century; it has been frequented by famous people and has always been the center of the cultural life of the town. Its art nouveau style and the old pink color of the façade, differentiates it from the other palaces of the square.

Getting to Ascoli Piceno

Ascoli Piceno is easily navigated on foot, as all the town’s major sightseeing attractions are located in the fortified historical town center. Visitors can enjoy a casual stroll through this picturesque area without having to worry much about traffic, as most streets in the area are too narrow to allow cars.

Other parts of town and the outskirts can be reached by car, or public transportation, the option favored by the locals.

Ascoli Piceno may not be a very large town, but it does attract many tourists and has good accommodation options for visitors. Most of the hotels are located close to the train station and there are also a few good beds and breakfasts and one hostel where visitors can find good rooms at low prices. Some of the best places to stay are Ostello de’Longobardi, Cantina Dell’Arte, Albergo Piceno and Hotel Gioli.

Eating out in Ascoli Piceno

Diners in Ascoli Piceno will find plenty of dishes typical to the Marche region, such as Olive all’Ascolana, which is made with olives filled with spices and meat, then battered, breadcrumbed, and fried. Some of the best places for trying traditional food in town include Trattoria Da Middio, Peperoncino, and Lorenz.

Visitors interested in antiques will be able to find a good selection in the old streets in the center of town. Shoppers will also want to look out for the outdoor market, called the Mercantino dell’Antiquariato, which is held on the third weekend of every month. Good products to purchase while in town include handmade shoes and the traditional Anisetta Meletti, a locally made liquor that can be tasted on its own or in coffee.