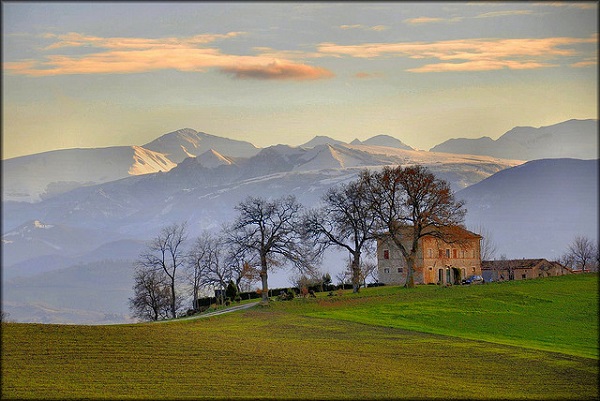 Macerata is a city located in the region of Marche in central Italy and is the capital of the Macerata province. The historic city center is located on a hill between the Potenza and the Chienti rivers, while the modern part has been developed below, in the same rivers’ plains. The population of the city of Macerata, Italy is close to 43,000 and the old and new parts are connected by an elevator.

Macerata is famous for being the birthplace of Matteo Ricci, a 17th-century humanist, and mathematician. Ricci was the first Westerner to visit Beijing in 1601 and would go on to translate various classics like Cicero and Euclid into Chinese. The city was also home to Giuseppe Tucci, a scholar of Asian cultures born in 1894, and the painter and architect Ivo Pannagi. Tucci was the recipient of the prestigious Jawaharlal Nehru Award in 1978 for pioneering archaeological excavations in locations like Tibet and Iran.

Macerata, Italy is a fairly wealthy city, whose economy is mostly based on agriculture. In spite of this, times have not always been florid in the area. Indeed, Throughout its history, Macerata has often been caught in major political disputes, often deteriorating into wars. An important fascist center at first, it was then occupied by the Nazis for a couple of years before the end of World War II: this period was particularly hard for the maceratesi.

If you’re in town, there are a few places you should visit. You should start with the Church of Santa Maria della Misericordia, built in only one day, on the 15th of August 1477, during the summer holiday of Ferragosto, an ancient Roman holy day originally dedicated to Augustus, redesignated by the Catholic Church to honor the Virgin Mary. And indeed, according to legend, the Virgin Mary appeared here, in Macerata, inspiring the building of another Church right outside town, called Santa Maria del Sabato (Saint Mary of the Saturday). To end our list of churches to be visited we mention San Filippo, a 17th-century building dedicated to San Filippo Neri, a mirror of the most perfect Baroque artistic canons.

For the religious, every year it is possible to join the “Holy Walk” from Macerata to Loreto, the site of a very important sanctuary dedicated to the Virgin Mary. However, before that, to get enough energy, we strongly advise that you try out the local dish, the vincisgrassi,  a regional specialty similar to lasagne.

As far as museums are concerned, there is a great collection of 20th century Italian art featured at Palazzo Ricci, and it is good to visit the “Museum of the Nativity”, as well as the “Museum of the Italian Risorgimento”, where the acts that led to the unification of Italy are featured.

Dante Ferretti is an important celebrity born in Macerata. Mr Ferretti is world known as one of the best production designers in the history of cinema. He has been involved in some of the most successful Hollywood productions and, among his fans, he can count director of the calibre of Martin Scorsese. His work has earned him two Oscars so far.

The city’s main square is Piazza della Liberta’. One of the important buildings here is the Loggia dei Mercanti, which has two-tier arcades dating back to Renaissance times.

The already mentioned Palazzo Ricci is located on Piazza Vittorio Veneto, which is not very far from the Loggia. The palace has beautiful architecture that dates back centuries. Today, the building is home to an art gallery and a famous museum. The most important artwork in the gallery is the “Madonna and Child” created by Carlo Crivelli.

The Duomo of Macerata, Italy was built in 1771 and is considered the most important building in the city. The architecture of the cathedral is neo-classical in style. The beautiful bell tower dates back to the 15th century and is a remnant of the original building that stood on the site. The interior of the cathedral was beautifully designed by Cosimo Morelli.

Palazzo Buonaccorsi was built in 1700 for Count Raimondo Buonaccorsi, based on the designs of Giovanni Battista Contini. One of the most famous parts of the palazzo is the Piano Nobile, which features the beautiful Sala dell’Eneide, decorated with sublime frescoes by artists like Solimena, Dardani, and Rambaldi. The palazzo also has a beautiful canvas painted by Giovanni Gioseffo dal Sole and other works by Granceschini, Balestra Lazzarini, and Gambarini.

The church of San Claudio al Chienti is located south of the main town and was built in Romanesque style. Its shape is quite unusual because it was built, in the 14th century, on the remains of an older church.

One of the most important places to visit in the city is the Sferisterio Arena. This huge arena was built in 1820 as a stadium by Ireneo Aleandri. The architecture of the arena is neoclassical and the pit for the orchestra is so wide it is often said that musicians on each end of the pit cannot even hear each other. During the months of July and August, the famous Sferisterio Opera Festival takes place here.

Getting to Macerata, Italy

The easiest way to reach the city is by state buses, which are quite punctual and extensively cover most towns and cities in the region. Remember it is not necessary to buy tickets in advance, they can be purchased at the station before leaving. Another comfortable option for reaching Macerata is to drive into the city.

Moving Around in Macerata

Blessed with natural beauty, Macerata is one of the best cities in the region to walk around in. The strategic, elevated position of the compact historic center offers gorgeous panoramic views of the landscape below and is easily navigated on foot. To explore the modern part of the city you can walk, use public transportation or drive.

Macerata attracts quite a lot of tourists, especially during opera season, so there are great places to stay in the city. Some of the best hotels in Macerata are Albergo Arena, Hotel Arcadia, Albergo Lauri, Hotel I Clauri, and Hotel Claudiani. There are also a few inexpensive beds and breakfasts to choose from. If you want to visit Macerata during the summer, book ahead: it is very difficult to get hotel rooms for July and August.

Eating Out in Macerata, Italy

Plenty of good crafts and souvenir shops are located in the older part of the city. There are also a few good wine shops that sell local wines.