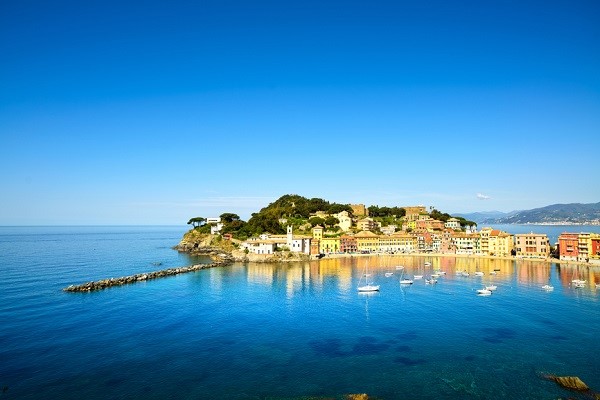 The region of Liguria is also known as the Italian Riviera and is well known as a major tourist spot with famous resort towns sprinkled among fishing villages and rocky coastline. Liguria occupies a thin stretch of the coast from Italy’s western border with France stretching south and east to the region’s border with Tuscany. To the north and east coastal mountains separate Liguria from Piedmonte and Emilia-Romagna.

The Italian Riviera from Portofino to Cinque Terre

This unique geography of mountains and sea has produced a climate and landscape that you would expect much further south in Italy. Palm trees, citrus fruits, and olive groves share terraced growing spaces with Liguria’s famous flower industry and more common northern species like chestnuts. Let’s discover the Italian Riviera!

Liguria is a region of scenic contrasts–look no further than the mountains towering over the sea–and is a region of cultural compromises, where the cultivation of a hostile land has taken over from the practice of fishing. It is ideal for those who are eternally undecided between a walk on a sandy beach with the scent of the sea in the air or hiking in the mountains and discovering the beauty of the Alps.

It is unusual that such a short stretch of land provides for such varied interests. Indeed, this territory is most often chosen by the curious traveler but is also perfect for the family on vacation, the sportsman, and even those looking for relaxing or romantic holidays. Liguria is also famous because it is the only region in the world that features two UNESCO World Heritage sites–the historical city center of Genoa and the famous Cinque Terre area.

Tourist Areas of the Italian Riviera

Cinque Terre and Golfo dei Poeti boast breathtaking landscapes that are not soon forgotten by visitors to the area. You can reach this area by ferry, train or on foot. The most famous walking path in the area links all of the five Cinque Terre towns.

Tigullio and Genovesato are full of quaint fishing villages dotted with multicolored houses and boats bobbing in the deep blue waters. The city of Portofino, a glamorous destination for the international jet-set crowd, is part of this beautiful area. Visitors to Portofino will find many different types of shops and accommodations of several different categories and price points.

Camogli is another place to visit, famous for its annual Fish Festival, hosted in its little harbor, that draws people from all over the world to taste fresh fish prepared in a giant frying pan. Or why not check out San Fruttoso Abbey? Located among the rocks in a small bay the town boasts several little restaurants that serve excellent seafood. There is also great diving to be found here, including the underwater sight of Christ of the Abyss.

Rivera delle Palme is full of fascinating places like Varazze (a little village that is a paradise for surfers, water skiing and sailing), Albisola with its pottery and wonderful masterpieces, and Bergeggi and its naturally beautiful isle. There is also Finale Ligure and Varigotti, famous little towns with sandy beaches), Albenga and the little Gallinara island, and Alassio (where you can taste the renowned pastries Baci di Alassio.)

Finally, there is the Riviera dei Fiori area, which borders France. In this area the most famous town is Sanremo, known for its flowers and Italian Song Festival, but there are also other places worth visiting like Blazi Rossi, Arma di Taggia and Diano Marina.

History of Liguria in short

Liguria’s isolated coastline has been occupied since the 5th century BC, first by the fiercely independent Ligurian peoples. The original Ligurians did not take to Romanization for many centuries, with small enclaves like the Cinque Terre never being fully conquered by Rome. After the fall of the Empire, the region was ruled by Byzantine and Lombard factions; Liguria’s inaccessibility by land led to a certain level of autonomy, however, there was always a risk of invasion by Saracens, Normans, or pirates.

By the Middle Ages, the powerful maritime republic of Genoa ruled the entire Liguria region. During a war with Venice, Genoa captured Marco Polo and he then went on to dictate his adventures while in a Genoese prison. Eventually, Genoa would falter and lose most of its power, but not before a brief revival under the rulership of Admiral Andrea Doria. Liguria was later annexed by Napoleon and given to the House of Savoy after the Emperor’s final defeat. This loss of independence led to Ligurian patriots like Mazzini and Garibaldi (from the Savoy city of Nice) initiating the Italian Risorgimento, which aimed at unification and was the beginning of the modern nation of Italy.

Liguria is a territory of fine cuisine made of simple, genuine products. The pride of Ligurian cuisine is pesto, the traditional sauce most often used in pasta dishes that is famous the world over.

Seafood also plays a large role in the local diet with fresh-caught anchovies from Monterosso being a favorite antipasto or main dish. Swordfish, tuna, sardines, and sea bass are also popular local fish while rabbit and veal are popular meat staples. Traditional Ligurian meat recipes include tomaxelle (veal rolls) and Coniglio in umido (literally “rabbit in humidity” — a rabbit stew.

More about the Italian Riviera

Ligurian gastronomy is also known for the Genovese Focaccia, focaccia made with cheese of Recco and farinata (the oldest of traditional Ligurian dishes, developed during Roman times; it is made of chickpea flour). Ligurian desserts include the traditional Christmas cake Pandolce Genovese, made with pine nuts, raisins, candied pumpkin, and fennel seeds, and typical soft biscuits Amaretti of Sassello, which are made with almonds. Liguria is also famous for its Canestrelli of Torriglia cookies, which are made in the shape of a flower with a hole in the middle and are covered in icing sugar.

The wines of Liguria are tailor-made to suit the region’s cuisine, some grown within spray-shot of the crashing waves. Reds include the fruity Rossese di Dolceacqua (DOC), a Dolcetto known as Ormeasco, and the dessert wine Sciacchetra Rosso. The white wines of Liguria are rightly praised as some of the most unique in the world, with the dry Cinque Terre and sweeter Sciacchetra (both DOC) being very popular and excellent with any seafood. The straw-yellow and very aromatic Colline di Levanto (DOC) is just being discovered by wine lovers outside of Liguria. Spirits range from the citrus-based Limoncello Ligure to walnut-infused Nocino and the ever-popular Grappa still made at home in many areas of Liguria.

Genoa is the capital of the Liguria region and it is known as the Superb. The city’s medieval district is filled with beautiful palaces and churches and is one of the oldest in Europe. Genoa’s great expansion began in the year 1000 when the city began its might ascent thanks to the power rendered by its harbor and being such a trade hub. In that time, Genoa extended its commercial and military rule to most parts of the Mediterranean and the apex of the city’s power was reached under Andrea Doria in 1528.

In fact, this period is often referred to as the Genovese Century. The Genoese people were wealthy merchants, navigators, and extraordinary financiers of Charles V’s Spanish empire. During Genoa’s Resurgence, the city was populated by the likes of Mazzini (patriot, politician, and philosopher) and Mameli (patriot, poet, and author of Italy’s national anthem, which still bears his name). Genoa is also famous for producing the Italian military great Giuseppe Garibaldi, known as the Hero of the Two Worlds.

In the 1900s Genoa continued to be one of the major ports in Northern Italy. In the new century, 2004 to be exact, the city was named the European Capital of Culture and in 2006 Genoa has declared a World Heritage of Humanity site by UNESCO.

How to reach Liguria?

So what do you need to know more about the Italian Riviera, and how to reach Liguria? Thanks to an extensive road and motorway network, Liguria can be reached easily by car and also by train. Genoa has two large stations: Genoa Piazza Principe and Genoa Brignole and the capitals are just about 2 hours from Milan and Turin and about 6 hours from Rome. Genoa’s Cristoforo Colombo airport connects Liguria with other major Italian and European cities. Nearby there also the Milan, Nice, and Rome airports.

For those who travel by boat, Liguria offers 300 kilometers of coast and more than 40 small harbors and tourist landings. Furthermore, Genoa and Savona are two important cruise ship destinations.     For more info about the region Liguria, click on the link.