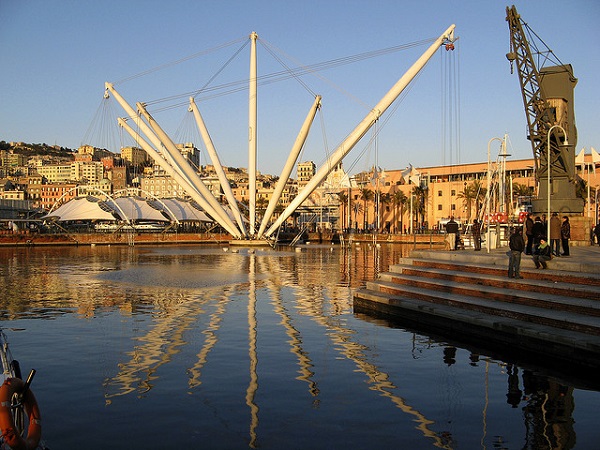 Blue water and the port, hillsides and the sprawling city beneath–visitors will find that there is much to see when looking at the famous city of Genoa from above. If you would like to relax with a stunning view before hitting the beach there are tons of great places in the hills and towns around Genoa to view the panorama of the area.

The most famous place for panoramic views in Genoa is Spianata Castelletto; it is very close to the port and the Principe railway station and you can easily get there through the public transit system. From this spot you can admire the port, Genoa’s historic city center, the sea and the hills that surround it. Spianata Castelletto is a legendary spot, much favored by lovers and romantics who come from far and wide to see the fantastic sunsets.

To arrive in Spianata Castelletto you have to take the old lift, called “The Paradise Lift” from Piazza Portello. This lift is famous, because it is 100 years old! The station is built in Art Nouveau style and from the windows you can see the bright lights of the city. The station is beautiful enough to inspire poetry–see Giorgio Caproni’s L’Ascensore–and the lift ticket costs about € 1,20.

Another panoramic lift that allows for an expansive view of the whole city is The Bigo, located in the Old Port of Genoa. Designed by the renowned architect Renzo Piano in 1992, for the celebrations for Christopher Columbus, the glass cabin of the lift is outfitted with an audio system and panels, which acts as a guide for visitors. The lift goes up 40 metres and turns on itself, offering the chance for a 360° overview of Genoa.

To have an even better view of the port head to the highest mountain in the Polcevera Valley, located outside of Genoa in Ceranesi. Monte Figogna, better known as Madonna Della Guardia for the sanctuary located at the top, is 841 meters high and on clear days you can see all the way to Corsica. The mountain can be reached by car, bus, or hiking trails.

From Parco del Peralto – Righi you can see both of Genoa’s valleys, Bisagno and Polcevera. After catching the great view visitors can stroll through the winding streets near the old walls and castles in the city, which were built in the 17th century.

From another sanctuary close to Genova Brignole Railway Station you can see the Bisagno Valley, the Foce zone and the center of the city.

Finally, a different way to view Genoa is from the sea on a boat. There are some maritime consortiums that offer the possibility of tourist trips on their boats, which depart from Genoa’s Old Port. From these boats you will enjoy a privileged panorama of the enchanting city – called La Superba – and its palaces, churches, forts and the historic symbol of the city, lighthouses. The tours last about forty minutes and waters inside the port are usually calm and tranquil.

If you find yourself in the Genoa area don’t miss a chance to view the city from above. The panorama of sea and sky is one not soon forgotten.

The most important Railway stations are Genova Principe and Genova Brignole. Genova Brignole was built in 1905 for the  Worldwide Exposition (today’s Expo), based on a project by Giovanni Ottino.

But for sure tourists who come in Genoa have to visit the other station: Genova Principe, the first and most important station of the city built in the center of the arc of the port in a very good place for moving people and goods. It is a very artistic and large building of neoclassical inspiration realized in 1860 for the track Genoa – Turin, the first trek in the northern part of Genoa. A project of the Architect Alessandro Mazzucchetti. The original station was enlarged in 1900 thanks to the project of the engeneer Giacomo Radini Tedeschi. It is a pity that, during the second world war, the steel vault of the old part was destroyed in order to use the metal for war needs and this was never reconstructed.

The other railway line of Genoa, the line between Genoa and Casella. It is a typical touristic train that starts near the McKenzie castle (built between 1896 and 1906, near Piazza Manin, in the center of Genoa) and reaches Casella through a track considered one of the most romantic in the world. This railway line is in a sort of way the history of Italian railway lines. The locomotive is in use since 1924 and it has many original electronic components and wood benches in the coaches. You can even arrange your wedding on this train!