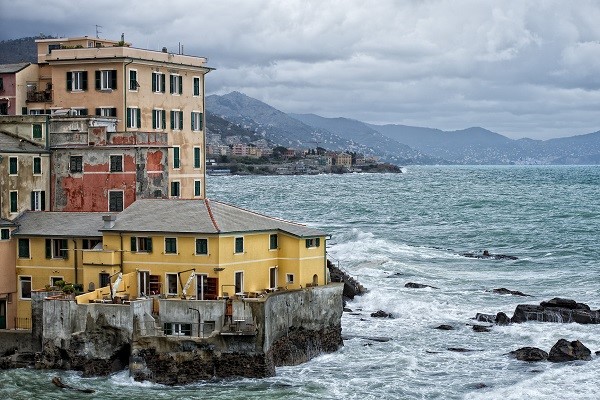 Genova (Italian for Genoa) is the capital of the Genoa province and Liguria in northwest Italy, a city rich with history and importance. Genova is known for being the chief seaport of Italy, and for competing with Marseilles, France, to be the leader among Mediterranean ports. The harbor facilities in Genova were terribly damaged during World War II and also by storms that occurred in 1954 and 1955, but have since been re-established and improved for modern usage.

A Brief History of Genova

Genova, a town of Ligures, experienced tremendous success while under Roman rule. The town became a free commune around the 10th century and was governed by consuls. During the 11th century, Genova (with assistance from Pisa) drove the Arabs out of Corsica and into Sardinia. Sardinia became the focus of a rivalry that resulted in an eventual war with Pisa. Genova won the decisive naval battle of Meloria in 1284.

During the Crusades, Genova’s wealth and strength continued to grow mightily. From Spain to the Crimea, Genova was able to expand, acquire more possessions and trading privileges. In 1408, a group of merchants who were providing a huge portion of Genova’s military defense and expansion funds, formed the powerful Banco San Giorgio. Over time Genova’s policies collided with Venice’s plans concerning the Mediterranean, resulting in wars between the two cities. The wars ended in 1381 with the Peace of Turin. In 1339, an election was held for the first doge, who remained chief magistrate for life.

From the 14th through the 18th centuries, rule of Genova changed hands several times between the French, Spanish and Austrians. In 1797, the Ligurian Republic was formed and was formally annexed to France by Napoleon I in 1805. In 1814, Genova and Liguria were united with Sardinia by the Congress of Vienna.

Although Genova is the chief seaport, it is also a center for commercialization and industry. Among its leading industries are chemicals, motor vehicles, textiles, locomotives, ships, petroleum, airplanes and steel. These have declined somewhat in recent years, placing a heavier burden on service-oriented companies.

Places to See in Genova

Genova is a city of art and full of rich history due to its role as the capital of a powerful Maritime Republic.

Some great places to see in Genova are the palace of the doges, the medieval Church of San Donato, the Carlo Felice Opera House (dating back to the 19th century), the 16th century churches of St. Ambrose and the Annunciation, and other magnificent Renaissance palaces.

Walls and forts are abundant throughout the city; the narrow streets of the harbor area are captivating. One popular attraction is the lighthouse called Lanterna, which dates back to the 16th century. This lighthouse is an important “landmark” of Genova.

In 1992, Renzo Piano was credited for redesigning the Old Port. A modern aquarium and a tropical greenhouse are located there. Genova also has a university which was founded in 1243 and a few museums. Genova’s maritime presence is still very strong, which can be sensed throughout the entire area.

Discovering the city’s hidden gems and special places will likely surprise you. If you visit Genova be sure not to miss:

Construction of the palazzo began in the 13th century during a very prosperous time in Genoa’s history. The location between San Lorenzo ad San Matteo was chosen by the capitani del popolo (people’s leaders) Oberto Spinola and Corrado Doria in the 1291. The construction of the Palace started 3 years later. The palazzo, which consisted of two large buildings owned by the Doria and Fieschi families, became “ducal” in 1339 when Simon Boccanegra was elected Genoa’s first Doge and the President of the Genovese Republic. If you visit the palazzo today to view its beautiful architecture and art, be sure to remember that it was the seat to the area’s Republican government for hundreds of years. Today the palazzo remains an important headquarters for cultural life in Genoa. The 17th century halls are used to hold congresses, conferences and concerts. Inside there are bookshops, restaurants, bars, shops and art galleries.

The Palazzo Ducale is open to the public every day. The ticket office is open from 9.00 am to 6.30 pm daily.

The Grimaldina Tower’s free guided tours are organized every Thursday and Friday afternoons and on Saturday mornings. From Tuesday to Sunday (10.00 am – 1.00 pm and 3.00 pm – 6.00 pm) the ticket for the guided visit is about 4 euros.

If you’re a boat retailer or fan, you don’t want to miss the International Nautical Show, which takes place in October each year.

Another interesting event is “The Regatta of the Ancient Sea Republics“, which involves Genoa, Pisa, Venice and Amalfi engaging in a navigation competition. The regatta occurs every four years in Genova.

Sapori al Ducale: Food and Wine Event. Every second weekend of the month, from 9.00 am to 8.00 pm, a special event takes place in front of the Palazzo Ducale. A special food and wine event it allows visitors to taste and purchase local and genuine products. Guided tours will help you to discover the hidden gems of Genoa shops, which still retain their ancient scents and colours.

It is a food and wine event where you can buy and taste local and genuine products. You can participate in guided tours to discover the historical shops in Genoa that still retain the ancient scents and colors. If visiting Genoa this “trip into the past” is really not to be missed. Visit goldsmiths, silversmiths, pharmacies, butcher shops and focaccerie (similar to a bakery – see more below), as well as other shops that evoke the ancient crafts of the city.

What and Where to Eat While in Genova

Genoa’s Old District, located near the Palazzo Ducale, has many winding and interesting alleys. Here you can find many shops where you can sample two of Liguria’s famous dishes: Focaccia and Farinata. These can be considered an ancient version of “fast food”–easy, simple and delicious.

If you’re not familiar, focaccia is a mix between pizza and bread and its height and thickness is equivilant to about the length of one finger. Made with Ligurian olive oil focaccia can be consumed at any time of the day and its deliciousness was recognized by Slow Food (www.slowfood.com). Focaccia can also be eaten with different condiments like potatoes, herbs, onions, tomatoes and olives.

Over 2,000 years old Farinata is one of Liguria’s oldest dishes. Dating back to Roman times it is a poor dish made from chickpea flour and water and must be eaten fresh from the oven.

For a light lunch you can stop in some local restaurants and taste the famous trofie (pasta) al pesto or Pansotti (pasta) with salsa di noci (a sauce made of nuts). In the many Focaccerie (like bakeries) you can eat a piece of farinata or focaccia. Another local speciality is friscieu, which are fried batter balls filled with herbs and whitebait while they are in season.

There are many nice restaurants to choose from in Genova. From elegant “slow-food” (snail) at Le Chiocciole to simple cooking from Da Maria, there’s variety for every taste.
Focaccia Genovese Recipe

Dissolve the brewer’s yeast in some warm water. Then mix it with the flour adding some water. Knead until the dough becomes smooth and elastic. Let it rest for 1 1/2 hours in a cloth towel. Then roll out the dough on a baking pan (previously greased with olive oil) and sprinkle it with the rest of the oil and salt. The focaccia’s thickness should be about 2 centimeters. Finally, cook for about 20 minutes at 180 degrees.

In Genova, there are many places that you can head to for some great shopping. The Old Center houses beautiful little shops where you can buy goods of all kinds. The more exclusive boutiques of Genova are situated on the elegant Via Roma. On Via XX Settembre, the street covered by porticoes, you can find different kind of shops and the Mercato Orientale, a market full of local products.

As you visit the lovely town of Genova, you’ll be able to test out many small shops offering anything from spices to condiments.

Genova is a great place to visit and learn about successful sea trade of old!