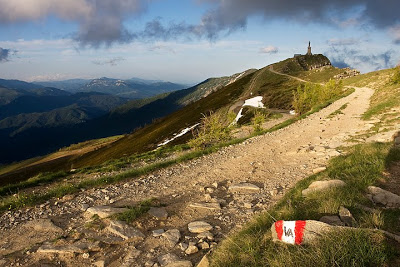 The beautiful Alta Via dei Monti Liguri stretches 400 kilometers from the border of France to the border of Tuscany. On one side the Alta Via faces the sea, on the other the chain of Alpine mountains. The views from Alta Via’s green paths are second to none and as you walk along, sea views appear on the coastal side providing glimpses of Corsica in the distance and Monviso and Monte Rosa on the other side.

Itineraries for tours in the area offer diverse opportunities for every kind of traveller. There are trails suitable for families with children and the elderly, as well as demanding trails for well-trained hikers. A very useful aid for those walking the Alta Via are the trail markers, coloured in red-white-red and marked AV, which are located along the tracks. Walking the Alta Via means a chance to visit villages, castles, museums and participate in traditional Ligurian feasts along the way.

In this area you can practice outdoor activities such as hiking and horseback and bicycle riding, as well as paragliding, skiing and rock climbing. Along the Alta Via dei Monti Liguri, there are accommodations like refuge trails, hotels, bed & breakfast and farmhouses, in which you can stay and taste typical Ligurian products and delicacies.

They say a picture is worth a thousand words and these photographs by the great nature photographer Paolo Bolla tell so much more about the extraordinary environment around the Alta Via than words could ever fully express. The interview that follows explores Signor Bolla’s work, his inspiration and his Ligurian photographs.

Paolo Bolla was born in Savona and he started exploring photography in the late 1990s. Paolo quickly married his passion for photography with his love of nature, which allowed him to explore the world around him and discover the glories of that natural world. Bolla’s photographs evoke unique feelings and emotions through their treatment of nature scenes.

Paolo Bolla’s nature photography brought him together with five other photographers to create a book dedicated to the Alta Via dei Monti Liguri, the most important Long Green Way in Liguria. One Year on the Alta Via, edited by Il Piviere, is a collection of images taken on the long hiking trail that crosses Liguria from east to west. Paging through the book and gazing at the images crafted by these photographers makes one want to experience the beautiful area first hand.

I met with Paolo in a small coffee bar in the tourist port of Savona and he immediately pulled me into his world by describing the adventures he has taken on the Alta Via dei Monti Liguri. Paolo explained that each of the five photographers was assigned a portion of the 400 kilometers of terrain and he was given the western part of Liguria, which stretches from Ventimiglia to Colle di Nava in Imperia.

Paolo is an excellent storyteller and I became very much involved with his personal experience on the Alta Via, and for this reason, I decided to not ask him too many questions. I didn’t feel the need to, because the answers I was looking for came straight from him without need to ask. Through his stories and photographs I was able to get a vivid idea of the great variety of landscapes that Paolo has encountered through his photographic career, from coastal areas to the most virulent mountains of the Ligurian hinterland up to Mount Saccarella, the highest mountain in Liguria. While browsing through Paolo’s shots I noticed the change of vegetation from the areas closest to the sea, which featured vineyards and olive trees, up to the higher plains, which host conifers.

Paolo told me that during his traveling on the Alta Via, he had the fortune to meet several different species of animals such as fox, chamois and even an eagle.

While looking through Paolo’s photographs with him I asked what stage of the trail was most emotional and memorable for him. This is when Paolo showed me a stunning photograph of a sunset plunging into what seems like endless, bottomless clouds.

As you can see the picture speaks for itself! Looking at Paolo’s photo I understood some of what the photographer must have felt while capturing the sunset that day. The majesty of nature is clearly visible in the image. Paolo then showed me the photographs he had taken on the summit of Mount Saccarello. Paolo now recalls how the fatigue of that long trail was rewarded with an unforgettable view.

My time with Paolo was very interesting and as he continued to detail his experiences he also showed me more photographs, like the shot below. This photograph was taken from the Alta Via and is of the medieval village of Dolceacqua (“sweet water”), known for its D.O.C. wine Rossese di Dolceacqua.

As you can see from Paolo’s photos the Alta Via dei Monti Liguri is an untouched, unique environment of extraordinary beauty that has to be explored at least once in a lifetime.