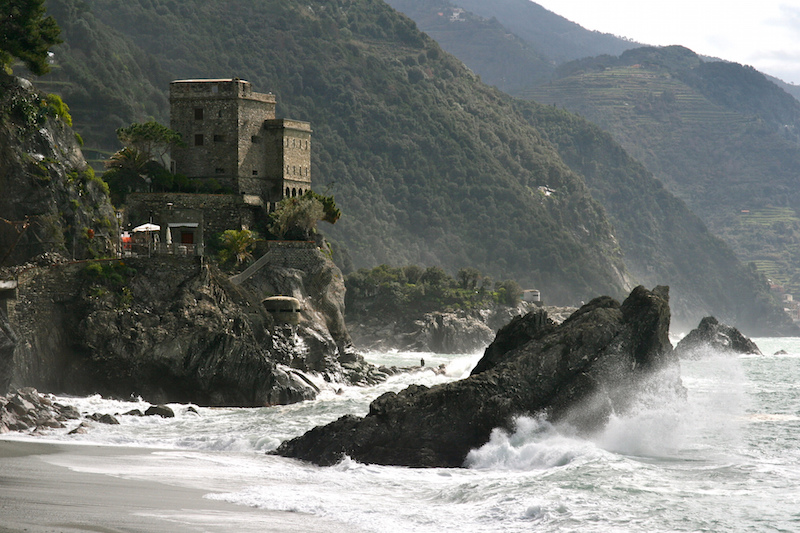 Monterosso is the furthest west of the five villages and is lined with vineyards and olive groves. You’ll find plenty of cliffs and clear water here. It is also the first to be historically attested: it dates back to 1056. The village is divided in an old and new section, marked by the Torre Aurora. The newest part of Monterosso, Fegina, is lively and full of hotels and tourist attractions: it is, it can be said, the result of the popularity the Cinque Terre enjoyed in the past decades. It is dominated by the Statue of the Giant, created at the beginning of the twentieth century by sculptors Levacher and Minerbi.

The old village, however, is where you want to go to see and experience that old fashioned, timeless feeling we’ve cited and discussed in our first article on the area. Dominated by the ruins of the old castle, the old town of Monterosso mirrors perfectly the typical allure of a ligurian seaside village, with its colorful houses and narrow streets, carruggi. Old Monterosso is also the only one of the Cinque Terre to have a beach.

Vernazza‘s natural stone pier curves into the water almost mimicking the “Italian boot.” Lovers of Roman history will be interested to know that a watchtower still remains as this was one a strategic location. Vernazza is considered, by many, the most beautiful and characteristic of the Cinque Terre. Its origins date back to 1080 and by the later Middle Ages, Vernazza was a well established nucleus, as witnessed by its laid-out, typically medieval, and by the presence of several architectural landmarks of that period. Santa Margherita di Antiochia, a church in Roman-Genoese style dating back to the thirteenth century is one of the best preserved examples of medieval architecture in the village.

Corniglia is built further up into the hills than the other four terre: this gives it an edge when it comes to landscape and the spectacularity of its views. A small frazione of Vernazza, Corniglia is a town for history lovers as its origins may date back to pre-roman times. It is the only of the Cinque Terre not to have direct access to the sea, although it probably has one of the most beatiful views of it of the entire coast. Corniglia is linked to the other Terre via well kept paths, perfectly maintained and cared for by the Parco Naturale delle Cinque Terre’ s staff. This is a truly beautiful village. From this town you will have a view of the Elba Island, the place where Napoleon was once exiled and crowned Emperor of the island.

Manarola is a larger town with a great deal to do. For starters, you should visit San Lorenzo, an early 14th century church of extraordinary beauty. It seems that its name “manarola” derived from the dialectal distortion of the Latin magna rota, that is, large wheel, possibly referring to the large mill that once was located in the town. Beside its beauty, Manarola is known for its fishing and its wine making. A most delicious and renowned wine the sciacchetrà, is also produced in the area od Manarola.

Riomaggiore is perhaps the most quaint and romantic of the five towns, with its wide and ancient streets leading to beautiful overlooks of the ocean which are spectacular in the evening. The coffee shop stays open late, as do the restaurants, and it is just a charming town at all hours of the day or night.

It is quite sure that the first settlements in Riomaggiore date back to the 8th century when the inhabitants of the Vara Valley, seeking for a better climate, moved towards the coast. The area produces olives and grapes, supporting the industry of oil and wine making. Its houses develop vertically, following the shape of their natural surrounding and exploiting space at the maximum.

The walking paths of the Cinque Terre

Along the walking paths are ancient towers and vibrant fields full of protected wild flora, signature of the Mediterranean. From the cliffs, gaze down to the blue Ligurian sea crashing against the rocks, while colorful fishing boats bob lazily along the waves. Hills lined with vineyards, olive groves and lemon orchards rise above the sea, colorful and full of life. If you decide to walk the many paths within the park, do so by folllowing one of the beautiful itineraries connecting the villages one to another. Within each town there are traditional restaurants and hotels, where friendliness is the only dress code, conversation and laughs are always on the menu, and the food will be something you’ll talk about for years (I still drool at the thought of lasagna I had there).

If you’re coming with your partner, you must follow the Via dell’Amore, the Path of Lovers, that connects Riomaggiore to Manarola, characterised by covered sections of the path with lovely archways giving the possibility to glance at the beautiful view.

While you can’t take the town home with you, you can snag some local wine, olives, handcrafted pottery, and whatever else you can fit in your backpack! Enoteca Internazionale is a store in Monterosso that sells a wide selection of wines from this area, as well as local olive oils. A similar store can be found in Riomaggiore. The two main wines from the region are Cinque Terre (a dry white wine) and Sciacchetrà (a dessert wine). They also produce grappa and limoncello, a sweet spirit made with fresh lemon peels, usually served chilled after meals. Extra virgin olive oil is another end product from the area and is made with Razzola olives grown in the Cinque Terre and along the coast.

From all you’ve heard it might not surprise you to know the tourist population of this area grows every year not from advertising but from word-of-mouth. People are so taken by their experience that they want other people to go there and those people tell other people and so on (not to mention that encore visits are always on the agenda of former visitors!). The Cinque Terre have been listed as one of the UNESCO heritage sites in 1997.

The best months of the year to visit this region are April, May and June. July and August are not only the hottest months of the year in the Cinque Terre, but also the hottest months for tourism. If you like to avoid crowds and scorching heat go early in the year, but if you enjoy the hustle and bustle of crowds and like sun-bathing and seaside activity you’ll love the area in July and August. It doesn’t matter when you go really, just go!