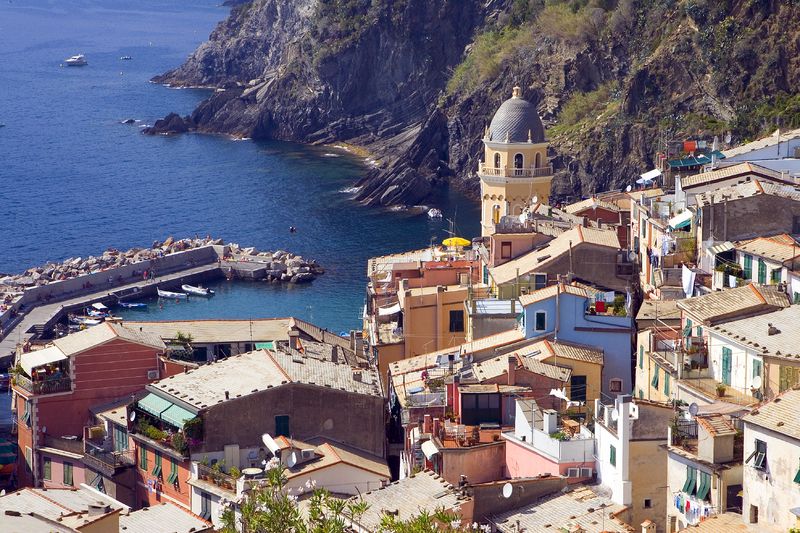 The part of the  Italian riviera that stretches between Portovenere and Cinque Terre is a beautiful landscape that is known for its cultural and its natural value. The disposition of the small towns and villages, the layout and the history of the settlements in this region are highly important and are the reason why it has been added in the list of world heritage sites by UNESCO. The towns of Portovenere, Cinque Terre and the islands of Tinetto, Tino and Palmaria have been included in the list.

Portovenere, a popular  Italian Riviera town,  is located in the province of La Spezia, and the municipality is made up of three small villages and three islands. The villages and the islands along with the town itself were declared a World Heritage Site in 1997 by UNESCO.

In ancient times, Portovenere was known as Portus Veneris and is believed to be dating back to 1st century BC. It is believed the name of the town refers to a temple which was dedicated to the goddess Venus. The temple was located at the exact location where the church of Peter the Apostle is today.

This  Italian Riviera town was mainly a small fishing village during the Roman era and had been linked to Saint Venerius. After the downfall of the Roman Empire, Portovenere became the main base for the fleet of the Byzantines but was destroyed in 643 by the Lombards.

It was also frequently raided by the Saracen.

The castle of the town dates back to at least 1131 when its walls were first built. It became the residence of the family of Vezzano before it was passed on to Genoa in the 12th century. The town suffered devastation due to bombings from the fleet of the Aragonese.

The older quarter of the town became less important and the new district began developing around the church of Saint Peter.

The Italian Riviera town of Portovenere is known not only for its scenic location, but also because of its beautiful architectural monuments, some of which are mentioned below:

The church of Saint Peter is the most important building in the town and was built in gothic style. The church was built at the location of an ancient 5th century church and was consecrated in 1198. Its most recent part was added in the 13th century, and has beautiful black and white stripes on the outer façade.

The church of Saint Lawrence was built in 1098 in the Romanesque style of architecture. It is believed the church stands where  an ancient temple dedicated to Jupiter. The church was considerably damaged in the 14th century and the 15th century due to fire and then due to attack by the Aragonese.

Other important sites in the Italian  Riviera town of Portovenere are the Doria Castle and the Grotta dell’Arpaia. The Grotta, also known as Byron’s Grotto, has now collapsed. The beautiful nucleus of Le Grazie has been set around the church of Our Lady of the Graces which was built in the 14th century. There is a small convent nearby which belonged to the Olivetans once.

Other noteworthy monuments include the remains of a Roman Villa from the 1st century BC.

Palmaria is a small island,  which is  a UNESCO world heritage site. The island is just 1.6 sq km and is the largest one in the archipelago of the three islands that are close to the town of Portovenere.

Tino is the second island located in the archipelago of the three islands which have been included in the list of world heritage sites. It is believed that Saint Venerius, the patron Saint of the Gulf, lived on the island, first as a hermit and then as abbot till he died in 630.

The feast of the saint is celebrated on the island every year in September. A sanctuary was constructed at the place where the saint died to store his remains. This sanctuary was extended to construct a monastery in the 11th century. The ruins of the monastery can be seen on the northern side of the island. Today the island is on a military zone and a light house has been built on it.

Tinetto is the third island in the archipelago. Along with the other two islands situated very close to each other, Tinetto is located south of the Italian Riviera town of Portovenere.

Cinque Terre is a rugged part of the Italian Riviera.  Cinque Terre means Five Lands , and include the Italian Riviera villages of Vernazza, Corniglia, Manarola, Monterosso al Mare and Riomaggiore. Along with them, the coastline and the surrounding hills are part of a National Park and have also been included in  the UNESCO list of world heritage sites.

Cinque Terre has long been known for its exceptional natural beauty. For centuries, locals created terraces on the area’s steep and rugged hills that look out to the sea. There is no modern development in the region, which is what makes it so special.

Though it is quite a popular holiday destination, cars cannot reach the region from outside. There are boats, roads and trains that connect all the villages.

The National Park of Cinque Terre was created in 1999 to protect the area’s ecological balance landscape and values of this beautiful coast line.