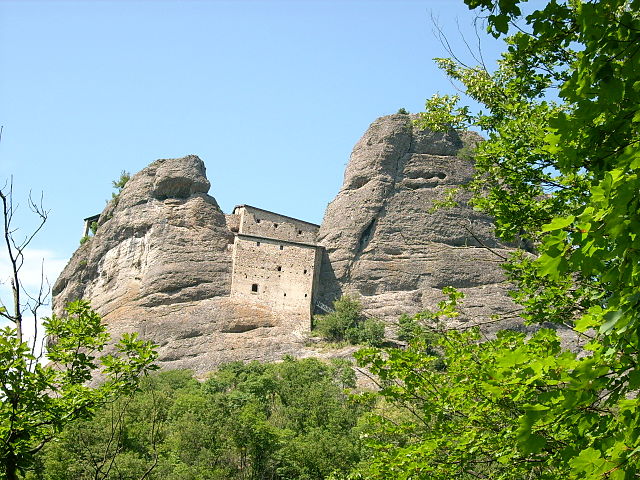 The Castello della Pietra (The Stone Castle), in the National Park of Antola, is one of the most extraordinary fortified buildings in Liguria and is considered a great masterpiece of architecture. This isn’t your usual fortress. The castle, which dominates a narrow valley, is wedged between two spectacular rocks creating a perfect symbiosis between man and nature.

It is thought that the fortress was built in the 12th century by the area’s bishops in order to protect the valley road that linked the town of Vobbia to the village of Isola. Later, the castello became the property of noble families like the Malaspinas and the Spinolas. In 1919, the castle was purchased by Beroldo Torre who later donated it to the city of Vobbia. In the late 1980s the Province of Genoa began restoration work to stop the progressive decay of the structure and, finally, the castle was opened to the public in 1994. If you wish to visit the castello it can be easily reached through a footpath in the woods. The walk is about 15 to 20 minutes long and the entrance price is only 4 euros a person or 10 euros per family. When you are there don’t miss the spectacular view of the Vobbia valley from the top of the castle’s rock tower. I can assure you that it is breathtaking.

Near the castle, there is a little bridge famous for its story, and I suggest to you to see it if you are in the area. The Zan bridge’s legend tells us about a lord of the Stone Castle named Zan. The lord wanted to build a bridge over the river near his castle, but was puzzled as to how. The story says that one day Zan met with the devil who volunteered to construct his bridge as long as he could take possession of the first soul who crossed over it. Zan accepted the devil’s deal and the next morning he went with his dog to check if the devil had finished his work. Surprised, Zan saw the bridge in front of him was already successfully completed. He also saw that the devil was waiting for his return at the end of the bridge. Being clever Zan made sure that his dog was the first to pass over the bridge.

The devil was tricked by Zan’s move and meditated revenge by never departing from the bridge until one day Zan came near the bridge to bury a wooden box containing a treasure. It wasn’t long before the devil had rushed to check the box’s contents. Figuring that sooner or later Zan would return for his treasure the devil put a curse on anyone who tried to retrieve Zan’s treasure chest, saying they would be wiped out by a frightful landslide.

Some centuries later, to drive away the demonic presence of the devil from the bridge, the people of that region decided to build a church nearby called the Church of Vobbia. Also, in an attempt to retrieve the treasure, the locals crossed the bridge but made sure the parish priest went first pouring holy water and making the sign of the cross. It is said that at that point the priest heard a great roar and saw the devil fleeing from the bridge. The treasure chest was eventually recovered and nothing bad happened to any of the participants of that expedition, the devil’s curse having successfully been lifted.

Halloween at the Castello della Pietra
Castello della Pietra is a great spot to visit during Halloween and is open to the public every October 31st well into the evening. Visitors come decked out in mask and costumes and armed with flashlights, because on Halloween they are led up the path in darkness to the castle where a party is held. If you happen to be in the area in October you should consider spending Halloween night at the Stone Castle as it’s a unique and entertaining experience.

Children can participate in the party and the ticket price for the occasion is 18 euros for adults and 10 euros for children. The ticket includes a visit to the castle and a traditional Ligurian dinner.