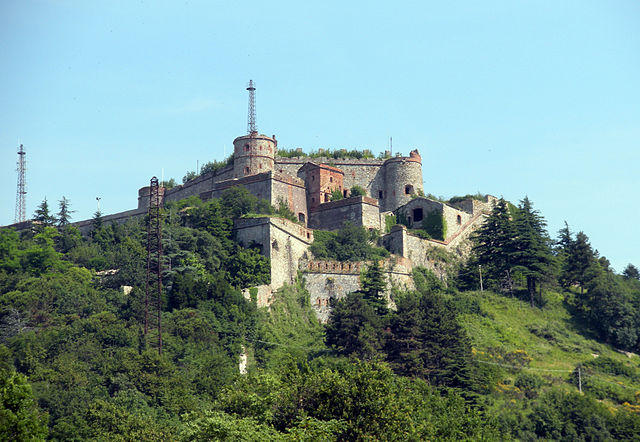 If you are visiting Genoa and prefer to experience the city in a unique way I suggest that you veer off the beaten track and follow the trails not often taken by tourists. A great way to do this is to take a walking tour through Genoa’s fortresses. These forts, located on the hills behind Genoa, are army castles fortified in the 18th and 19th centuries. Some of them can be visited or are used for shows while others are partly destroyed. The military fortresses are located in Parco Urbano della Mura, a protected nature reserve.

Parco Urbano delle Mura (Urban Walls Park) includes 1520 achres of hills between val Bisagno and val Polcevera; the park aims to protect the rare species of flora and fauna that live in its perimeter. The park takes its name from the walls that were built in the 17th Century AD to protect Genoa from foreign invasions. It also includes various fortresses built between the 17th and 19th Century: Castellaccio, Sperone, Begato, Puin, Diamante.

One possible route goes from Fort Sperone to the Diamante Fortress and takes approximately 3/4 of an hour on foot. Fort Sperone is located on the highest point of the New Walls, about 400 meters above sea level. Started in the 18th century, the fort was enlarged during the Napoleonic period and was once again restored in the 19th century. The view from the fort is very memorable and, on a clear day, you can literally see for miles. During the summer the fort is the scene of artistic performances and many Genoese locals attend these joyous events.

The Diamante, or Diamond, is located at 660 metres above sea level and is the highest of the Genoese Forts. The fort gets its name from the Mountain Diamante on which it is built and is a solitary and impressive building that rises up to meet the sky, just like a diamond. In the 19th century Diamante Fortress housed Napoleon’s French troops. In 2005 the fort was partially restored.  Diamante is also distinguished by its particular star-shape form and its perfect visibility from the sky. At present, indoor tours are not allowed due to the many years of decay, however, the fort’s lower bastions offer equally complete views of the city, the surrounding valleys and the Riviera.

This path goes through Forte Pui, via the “butterflies path”: in spring butterflies abound here.

Fort Castellaccio to Sperone and Begato (2 to 3 hours)

A shorter route (one to two hours) is from Righi, where the cable railway arrives, to Fort Castellaccio, up to forte Sperone and down to forte Begato. Forte Castellaccio was built in the 14th Century and modified in the 18th and 19th. From far away you can only see the Specola Tower, where capital punishments were carried out.

The Parco Urbano delle Mura is located just a few minutes drive from the center of Genova. You can also reach the area by the Zecca-Righi cable railway, by the Genoa-Casella Mountain Railway, by foot or by bicycle.

If you are planning a trip to Genoa why not consider a walking tour for a unique experience?