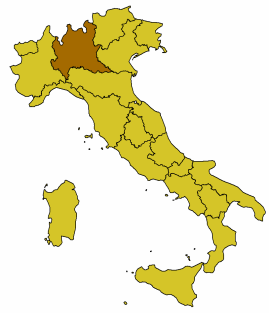 The Lombardy or Lombardia region of Italy occupies a major portion of the northern Po River valley between the Tincio and Mincio rivers. It is bordered by the Alps and Switzerland to the north and Emilia-Romagna to the south. Lombardy is home to Italy’s famous lakes Maggiore, Como and Garda that lie at the foot of the Alps. Piedmont and Valle D’Aosta border Lombardy to the west and the Veneto and Alto-Adige regions on the east. Not only is Lombardy an agricultural center, but an industrial and commercial one, as Milan is an international center of business and fashion.

In its history Lombardy has seen various waves of inhabitants from the Gauls, Etruscans and eventually Romans. The city of Milan was briefly the capital of the Western Roman Empire in the 4th century but was overlooked by the conquering Lombards who, besides giving their name to the region, made Pavia the center of their kingdom.

After Charlemagne the towns of Lombardy grew wealthy and independent, becoming city-states that eventually would have to band together to quell the ambitions of the Holy Roman Empire. The first of these Lombard Leagues successfully defended their autonomy against Frederick Barbarossa at the battle of Legnano in 1176. During this time Milan regained its prominence and flourished under the feudal rule of several dynastic families including the Sforzas, patrons of Leonardo DaVinci.

Several centuries of foreign rule ensued that included Napoleon and the Austrian Empire. By 1848 the Risorgimento was in full swing and Austrian rule was ousted in Lombardy.

Today Lombardy straddles a life of business and modernity with a beautiful countryside, magnificent and tranquil lake towns are contrasted by the busy lifestyle of Milan. However all of it is complemented by the regions bountiful agricultural wealth that feed the entire nation.

Lombardy is well above the “oil line” in Italian cooking and so butter is the cooking fat of choice for the region’s specialties.

The capital Milan is known for several dishes that make use of this abundant rice-growing region. Minestrone alla Milanese, which is the mother of all Minestrone soups and contains vegetables, rice and bacon. Risotto alla Milanese is a creamy dish of braised short-grain rice blended with meat stock, saffron and cheese. Osso bucco is a traditional main course of a knuckle of veal with the marrowbone intact and braised with rosemary and sage. The standout cheese of the region is Gorgonzola, a creamy and rich blue cheese that is ideal for sauces. The most famous dessert from Lombardy is the Italian fruitcake known as Panettone. Once only prepared for Christmas, this specialty is found boxed and sold year-round in Italy. Torrone, a popular nougat and almond confection is a native product of Cremona but is also sold nationwide.

Lombardy wines are mainly grown on the steep slopes of the Valtellina area, known for its well-aged reds. The gem of the region is the Valtellina Superiore, a deep smooth red that is aged for five years before being served. Around Lake Iseo is an area known as Franciacorta and is the home to Lombardy’s sparkling white wines. The locally grown Pinot Grigio and Pinot Bianco grapes to produce sparkling wines in the tradition of the Champagnes of France. However these wines are truly Italian and have been protected by the covetous DOCG designation.

Milan is the economic hub of all of Italy, a modern city that does not have the time to examine its past. The city is a Mecca for fashion and shopping but there are also historical highlights that include the city’s Duomo at the heart of the city. It is a gothic masterpiece that has an unbelievable view of the city from its many-spired roof. Milan is the home of the world famous opera house La Scala and some great museums but shopping enthusiasts will want to visit the Galleria, where the Milanese come to be seen.

Lovers of classical music know Cremona as the home to the best string instruments in the world. The world famous violins of Cremona reached its highest achievement with the work of Stradivarius Cremonensis and are still the most desired. A visit would not be complete without seeing both the museum dedicated to the work of Stradivarius as well as one of the modern violinmakers in the area. A climb to the top of the Torrazzo, Italy’s tallest belltower yields a spectacular view of the city and the mountains.

The Italian Lakes region is rightfully famous and is considered by many to be the loveliest lakes in the world. Everyone from Pliny the Younger to Ernest Hemmingway has written about Maggiore, Garda and everyone’s favorite, Como. These large glacial lakes are backdropped by the Alps with the Italian peninsula stretching below. The mild climate lends itself to numerous species of plants that give the area a more southern feel with lemon, pomegranate and palm trees. All of the lakes in the area are home to many quaint villages and resort towns that make a great escape from the heat of Rome in summer.