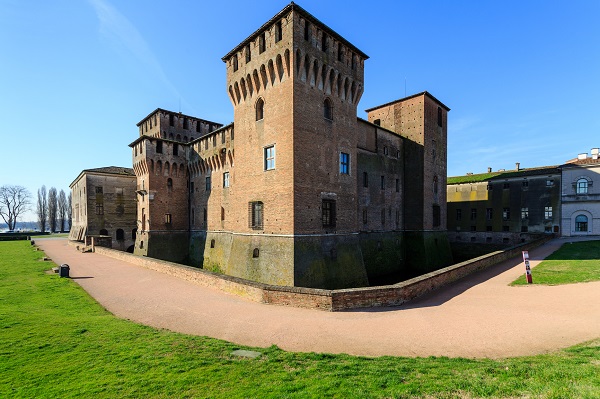 Castello San Giorgio is part of the Ducal Palace located in the city of Mantova. The castle can be reached by entering from the Ponte San Giorgio. It is a reddish castle and dates back to the Middle Ages, from the time of the Gonzaga family. The construction of the large castle began in the year 1395 under the directions of Bartolino, an achitect hailing from the city of Novara. It was built to defend the city and to establish its dominance in the territory.

Bartolino designed the castle in such a way as to raise it at the entrance of the bridge, Ponte San Giorgio, for further protection. It was a point from which the entire basin of the lake could be observed. This made it a perfect place for refuge in case of an attack. The castle was designed on a square plan. There were four towers at every corner, along with drawbridges and three doors. Originally, the castle was built only for defense purposes, but it soon became a part of the Palazzo Ducale. Luca Fancelli from Florence designed the beautiful renaissance style portico which surrounds the castle on two sides. The portico itself is surrounded by the northern courtyard.

The History of Castello San Giorgio, or Castle of Saint George

The castle was built in the 14th century with a square structure and corner towers. It always belonged to the well known Gonzaga family and represented their power and strength. The castle had always been known to be a rich treasure house of art work. Among the most beautiful rooms of the castle is Stanza degli Sposi, which was frescoed by Andrea Mantegna between 1465 and 1474.

For years, the castle was the residence of Isabella d’Este, the wife of Francesco Gonzaga. Isabella was a lover of literature and the arts and was always found in the company of noted men like Baldassarre Castiglione, Ludovico Ariosto, Leonardo da Vinci, Perugino and Andrea Mantegna. Today, the castle is a major venue for various cultural events and exhibits, and can be visited by tourists.

The Castle of Saint George

The castle can be entered through Piazza Castello. This part of the Palazzo Ducale has a wide porch on three sides. On the ground floor, is a large spiral staircase which leads to the Hall of Emblems, parallel to the Hall of Frescoes. There is a large collection of centaurs and monsters in the room. The Hall of Acronyms is located on the right, along with the Room of Frieze which has beautiful intertwined scrolls and leaves in gold on a blue background.

The Hall of Suns is decorated with various plant motifs. The famous Stanza degli Sposi used to be the destination of important visitors like the Duke d’Este and Lucrezia Borgia, along with many others. This is, certainly, the best known room in the castle and is located on the northeast tower, which is also known as Camera Picta.

Truly, the Stanza degli Sposi represents the solemnity of the Gonzaga court. On the chimney wall, Ludovico Gonzaga and his family are represented, along with a ceremony held by Cardinal Francesco Gonzaga. At the center of the large ceiling, various Roman emperors are depicted in monochrome. The room used to be the bedroom of King Ludwig II and the precious canopy is still supported by hooks. The frescoes in the room are precious and have been restored with great care.

Mantova and the Gonzaga Family

During the 12th century, three artificial lakes were created around the city, which still surround it on three sides. These lakes receive water from the river Mincio which descends from Lake Garda. They are called Lago Inferiore, Lago di Mezzo and Lago Superiore. There had once been a fourth lake, called Lake Pajolo, which completed the full defensive plan for which the lakes had been created, but it finally dried in the 18th century.

The Gonzaga family was famous for its love and protection of artists and men of culture. Among the artists they sponsored we can list Nicolò Sebregondi, Luca Fancelli, Domenico Fetti, Pisanello, Peter Paul Rubens, Donatello, Giulio Romano, Andrea Mantegna and Leone Battista Alberti. Over the years, several works of art got dispersed throughout Italy but the cultural value of the city is still considered to be outstanding.

The beautiful Palazzo Tè was built in the year 1525 by Giulio Romano. The style of the palace is late Renaissance with elegant touches of post Raphaelian style. The palace was the summer residence of Frederick II Gonzaga. Today it is home to the Civic Museum which has a large collection donated by Arnoldo Mondadori, an important publisher, and Ugo Sissa, an architect working in Iraq. Sissa donated several Mesopotamian pieces to the museum.

The Palazzo Ducale was the residence of the Gonzaga family. The entire structure consisted of various buildings, gardens and courtyards which were built around Palazzo del Capitano, Saint George castle, and the Magna Domus. The Saint Andrea basilica is also quite an important place to visit.

The church was built in a Renaissance style, as desired by Ludovico II Gonzaga. Works on the church began in 1462, as per the designs of Leon Battista Alberti. The church was built at the site of an older Benedictine monastery. It took more than 328 years for the construction of the church to be completed. Several changes were done to the main design but the church is still considered to be one of the best of Alberti’s works.

At this link you can find more info and pictures about Mantova.