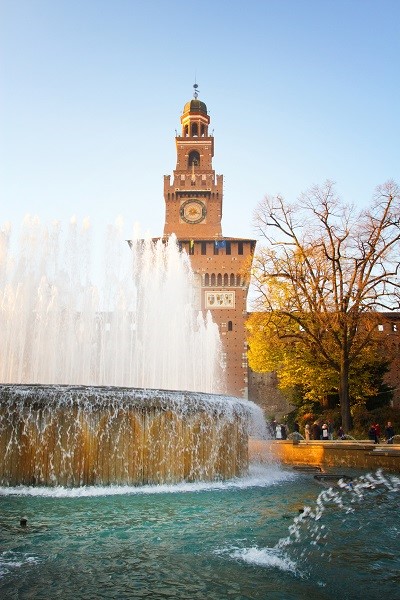 The Sforzesco Castle, or the Castello Sforzesco is one of the best-known historical buildings in Milan, witness of several historical events in the past centuries. The castle was demolished and rebuilt many times over the centuries. Today, after having been restored and embellished, it has become a symbol of the city itself and of its history.

History of the Castello Sforzesco

A small fortress known as Porta Giovia was built in the area in the year 1360, close to the medieval walls of Milan, which also included a gate with the same name. The fortress was built by Galeazzo II Visconti, who wanted it as a defense structure. Gian Galeazzo, his successor, also worked on the castle: the fortress was turned into a family residence and a large park was created in the northern part of the estate. Like a lot of other Italian castles, the Castello Sforzesco was constructed on a square plan and had a tower at every corner.

Filippo Maria was the last descendant of the Visconti family and had no heirs. At his death, Milan was proclaimed a republic. The Visconti fortress was then demolished, its tones used for restoring the town walls. Later, in the year 1450, Francesco Sforza who had married Filippo Maria’s illegitimate child, Bianca Maria Visconti, became the Duke of Milan. It was then that the castle was rebuilt again, on its earlier foundations: from now on, it was to be known as Castello Sforzesco, from the name of the family who inhabited it.

The new castle was of astonishing beauty. Its gem was certainly the majestic Filarete tower, placed at its entrance. The round towers flanking the main body of the castle were designed by Bartomomeo Gadio. Galeazzo Maria, Francesco Sforza’s successor, transformed the courtyard inside the castle and turned it into a luxury residence. This part of the estate was named Corte Ducale. There used to be a square complex next to Corte Ducale known as Rocchetta. This was a fortress inside the original fortress.

The Rocchetta had a high tower named Torre di Bona, named after Bona di Savoia. Later, in the 15th century, Leonardo Da Vinci and Donato Bramante were entrusted with the task of building a beautiful bridge overlooking the outer moat. They were also made responsible for painting the beautiful frescoes inside the Sala delle Asse.

At the time of the French domination in Milan and Ludovico il Moro’s fall, the castle was able to survive various events. During those years the Filarete tower was used to store ammunition. In the year 1521 a lightning hit the tower, causing great damage to the entire structure.

At the time of the Spanish rule, in the year 1526, another star-shaped fortification was built around the main castle to make it totally impregnable. At the time of the Austrian domination, in the year 1706, the Castello Sforzesco was used for purely military purposes. The castle was restored several times, until the assault by Napoleon’s troops in 1796. Severe damage was caused to the castle, whose towers were entirely destroyed. Finally, Napoleon demolished its external structure and kept its internal building to host his own troops. The rooms on the ground floor of the Corte Ducale with their beautiful frescoes were used as stables.

The years between 1815 until 1859 were years of turmoil in Milan, as the city rebelled against the Austrians. In 1861 when the Unification of Italy took place, the Castello Sforzesco and the city itself recovered from the destruction which had taken place over the previous years. Later, F. Luca Beltrami, a noted architect, was entrusted with the task of reconstructing and restoring the old castle. Whatever had remained of the old fortifications was demolished and new moats were dug all around the castle. The Bona and the Rocchetta tower were restored and new round towers were added. The Filarete tower was totally rebuilt and it was unveiled to the general public in 1905. Today the Castello Sforzesco is home to many libraries and museums.

The Museums of Castello Sforzesco

Today, the Castello Sforzesco is home to several museums and galleries. The best known of these is the Pinacoteca del Castello Sforzesco. The museum has a large collection of art which includes the Pietà Rondanini, which was Michelangelo’s last sculpture. Other noted collections include the Codex Trivulzianus manuscript by Leonardo da Vinci, and the Trivulzio Madonna by Andrea Mantegna.

Other museums inside the castle are the Achille Bertarelli Print Museum, the Archeological Museum with its Prehistoric and Egyptian sections, the Applied Arts Collection, the Musical Instruments Museum, the Furniture Museum and the Ancient Art Museum.

After four years of renovation, the castle today is home to one of the most important and largest painting museums. There are as many as 230 different works of art, which include the work of Cerano, Procaccini, Cesare da Sesto, Foppa, Antonello da Messina and Mantegna. The Pinacoteca museum, especially, is known for Milanese art and has a large collection of old paintings like that of the Trivulzio family.

On the first floor of the Corte Ducale, the four rooms on the left have a large collection of antique woodwork and furniture. There are many beautiful exhibits like the Coretto di Torrechiara which is a crucifix from the 13th century. There are several works by Giuseppe Maggiolini.

Inside the Pinacoteca museum, art works are displayed also in the Falconiera tower and are spread chronologically from the 15th to the 18th century, with several works of Bellotto, Guardi and Canaletto. The masterpieces include the Madonna of Humility by Filippo Lippi, the Madonna and Child by Giovanni Bellini, Madonna with Saints by Andrea Mantegna and Saint Benedict by Antonello da Messina.