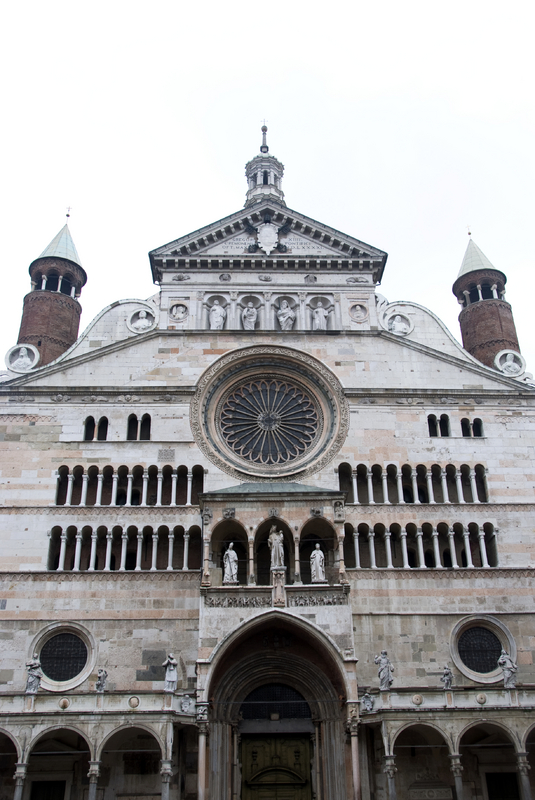 Cremona is located in Lombardy region in Italy and is the capital of the Cremona Province. For centuries Cremona has been known to be an independent and a wealthy city, for this reason there are plenty of handsome villas and mansions strewn all across the city. Cremona is also known for some good architecture examples in northern Italy.

What really made Cremona famous, was its long tradition of violin-making. For centuries Cremona has been specializing in making one of a kind violins which are exported to several countries and are used by the world’s best musicians. The city has not yet become an important tourist destination so it wouldn’t be very crowded even during the tourist seasons.

The Cathedral and the Baptistery of Cremona

The church of San Michele in Cremona is worth a visit since it has a good architecture and ornately designed interiors. Although it is not as impressive as the cathedral of Cremona it is still worth a visit.

The church of San Sigismondo is not as attractive as some of the main cathedral but is worth a visit since it remains mostly empty except on weekends, so a good option for those looking for a peaceful moment.

The Torrazzo of Cremona is the bell tower of the cathedral of Cremona. It deserved a special mention in the attractions’ list since it is the second highest Torrazzo in the world. The tower is as high as 112.7 meters tall. On the fourth floor of the Torrazzo is the largest astronomical clock of the world.

The Loggia dei Militi is an important historical building of Cremona. According to the inscription on its surface it was built in 1292 and was the place for the assembly of the local group of “Societa die Militi”.

Piazza del Comune is the main Piazza of Cremona. The Piazza remains busy and filled with people at all times of the day. The main tourists’ office is located on this Piazza and the Palazzo Comunale is located here. There are several beautiful buildings located around the Piazza and it is generally a good place for people watching or just for strolling around.

Museo Civico Ala Ponzone is the most interesting museum in Cremona. The museum holds some of the vast collection of Giuseppe Sigismondo Ala Ponzone. Most brochures are in Italian, however you can try to get a guide to translate it for you and guide you around the museum.

The best way to reach Cremona is by train. Trains frequently arrive in Cremona every day from neighboring cities in the province as well as from the rest of the locations in Lombardy. Tickets can be booked in advance from the main railway station, for most destinations the tickets are very inexpensive. Another way to reach Cremona would be by buses, although there aren’t many bus services available in the city except for the neighboring towns in the province. Cremona is also well connected to the highways so visitors can drive down in their own cars too.

Cremona is not a very large city so it can be easily explored on foot. The best known attractions are all located around the medieval center of the town which can be easily explored on foot. The narrow lanes and the alleys in the interiors are not really accessible by cars since there is a parking problem. Another way to move around the city is by the public buses. The public buses here cover most sections of the town and the tickets need to be bought before boarding the buses.

Cremona has plenty of good places to stay, mostly all around the center of the town and around the railway station. The hotels here tend to get really crowded and expensive during the top tourist seasons, however, if you book a room in advance it wouldn’t be much of a problem. Some good places to stay in Cremona are Dellearti Design Hotel, Hotel Impero, Astoria srl, Albergo Hotel continental, Hotel Ibis Cremona and Cremona Palace Hotel. There are also several comfortable bed & breakfasts as well.

Cremona’s known for its agricultural produce so no matter where you go to eat in the city you would definitely find dishes made with fresh local ingredients. Cremona has plenty of pizzerias, authentic Italian restaurants, cafes, gelaterias, fast food joints as well as restaurants serving international cuisine. While in Cremona the best thing would be to sample simple home made Italian dishes and some specialties of the region which are served in almost all restaurants. The local cheeses are also quite good so you could even try cheese and wine in the city along with freshly baked bread for a light lunch.

Cremona has quite a lot of shopping streets lined with small shops selling locally made clothes and jewelry and other handicrafts and trinkets. However, Cremona is really known for its agricultural produce so the best things to purchase while here would be salted meats, Italian mustard, cheeses and a typical sweet called torrone for which the city is famous. If you visit the local open markets too you would find plenty of inexpensive things to purchase as souvenirs and gifts. These open markets are usually held once a week at different locations.