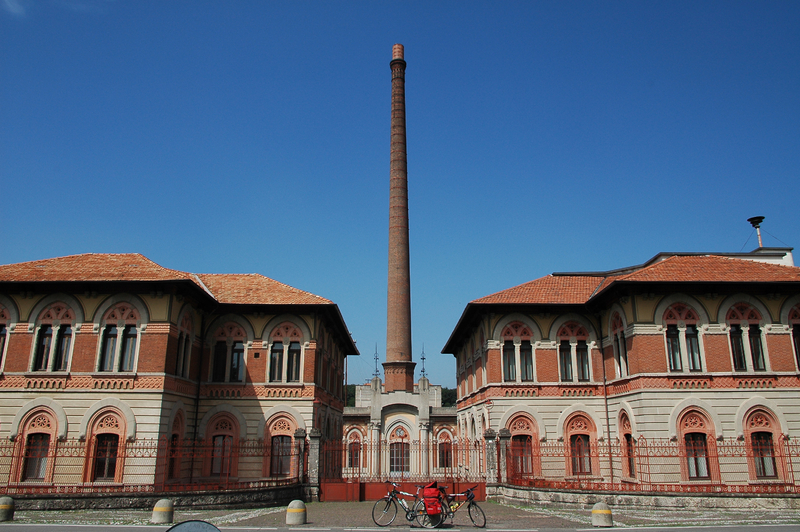 Crespi d’Adda is located in the Lombardy region of Italy and is known to be one of the best examples of a 19th century company town. The design and the architecture of the town is famous for being tailored to its workers. Featured on UNESCO’s World Heritage Sites list since 1995, Crespi d’Adda is quite intact and is still used today for industrial purposes. The town is an outstanding example of the ‘company towns’ built in Europe during the Industrial Revolution by enlightened industrialists to make their workers’ lifes easier.

In 1875 the 1 km stretch of valley between the two rivers surrounding Crespi d’Adda was bought by a textile manufacturer named Cristoforo Benigno Crespi for starting a cotton mill. Following the purchase Crespi opened a mill that used very modern weaving, finishing, and spinning processes. To house the mill’s workers a small village was settled and in 1906 the city’s hydroelectric power plant was built.

The residential area had various services like a school, theater, cemetery, church and a clinic. Crespi d’Adda was the first town in Italy to have public lighting.

Inspired by English architecture the housing for the workers was lined up on both sides of parallel roads on the east side of the factory. There was an avenue lined with trees which separated the factory from the residential area and overlooked the road plan. The architecture and the planning of the town were created by Ernesto Pirovanto while the main factory and the spinning department were designed by Angelo Colla.

Pietro Brunato and Pirovano ran the entire project and the construction work for fifty years. In 1889 Silvio, the son of Cristoforo, started to work in the factory as the main director after he spend some time in England. It was his idea to turn the multiple occupancy blocks into individual houses for single families with their own gardens, which according to him would make the entire complex more harmonious. In 1892 Silvio applied this policy and for as long as the Crespi management was in charge of the mill there were no reports of strikes, protests or any disorder in the town.

During the Great Depression, Italy’s fascist movement forced the Crespi family to sell off the entire town to the Italian textile enterprise which then transferred it to Rossari e Varzi Company in 1970. Later it was transferred to the Legler Company, that sold off several of the houses, and was last controlled by the Polli Industrial Group.

Today the township is inhabited mostly by descendents of the original workers. Production in the factory officially ended in 2004.

The Crespi factory was built on the main road on the western side of the town, facing the Adda river. The Crespi’s villa was located nearby and was built in a medieval style, rising high above the village because of its high tower.

The house of the priest and the doctor were built on the northern side of the residential area and were kept separate from the workers’ houses. They were also built higher up to indicate the higher social status of the occupants.

The church, the theater, the school and all the other services that were provided by the original owners of the factory were built in the center of the village along which are several long road and streets that are lined with the houses of the workers.

All the houses in the village have been separated by gardens and lawns and are lined along parallel roads. The walls of all the houses were decorated with red bricks to make them standard and the entire town look neat and uniform. Originally the doors and windows of the houses had red tile decorations and the facades had string courses that were later removed.

Tourists from all across Italy and other countries come to Crespi d’Adda for many different reasons. Some visit to find out more about the industrial archeology of the town or to admire its perfect planning. Built over the 19th and the 20th centuries, the settlement was self sufficient and the standard of living for its inhabitants was higher than in the neighboring regions.

Various guided tours are available for exploring the settlement. The tours normally begin from the main road, which offers attractive views of the settlement. Going down to the main village there is a small square near the church from where various bi-lanes then go in all directions inside the village towards the residences.

The company town of Crespi d’Adda is one of the most important and beautiful examples of industrial archeology in Italy. Before the arrival of Cristoforo Crespi 125 years ago the area was nothing but dense woods and open fields. Crespi arrived and immediately began setting to work, creating not only a beautifully planned town but opening a mill that would feed its citizens, a town that continues to be populated by the decendants of his original employees today.