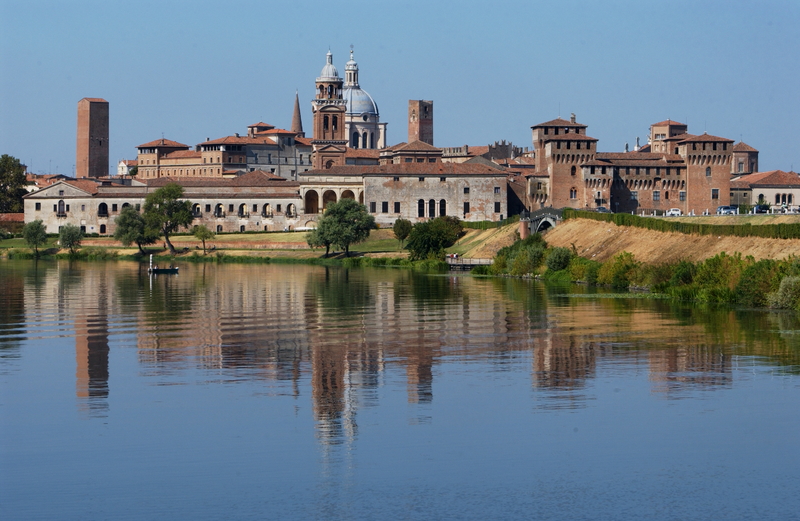 Mantua (Mantova) and Sabbioneta are two towns located in the valley of the Po River in the north region of Italy. Both of these towns represent Renaissance town planning. Mantua is important since it depicts the extension and the renewal of an existing town. Sabbioneta which is located 30 km from Mantua represents the implementation of the theories of ideal town planning from that era.

The layout of Mantua is quite irregular and has many quarters which show the different stages of the growth of the town since the Roman periods. The town has many medieval monuments among which are the famous Baroque theater and the Rotunda.

Sabbioneta on the other hand was created in the 16th century by Vespasiano Gonzaga Colonna and is a single period town. Both of these cities have exceptional town planning and a wealth of architectural, artistic and urban renaissance style. The common thread unifying both these towns is the Gonzaga family. They played an important part in the growth and the implementation of the renaissance ideals in these towns.

The Mantua city was founded around 2000 BC on the banks of River Mincio. It was an Etruscan village in the 6th century BC and was re founded by King Ocnus according to their tradition. The most important citizen of the city was Publius Vergilius Margo who was a poet and was born in the city in 70 BC.

The direct line of the family of Gonzaga came to an end in 1627 by Vincenzo II. Under the new rulers the town declined slowly. Gonzaga Nevers, which were the French branch of the Gonzaga family, ruled the city in those times.

The War of Mantua took place and in 1630 an army of more than 35,000 besieged the city and brought plague with them. Mantua never managed to fully recover from the disaster. Ferdinand Carlo IV allied with France in the War of Spanish Succession since his only aim was to hold the parties. After the defeat of the French, Ferdinand took refuge in Venice and lost Mantua to the Habsburgs of Austria.

Under the rule of the Austrians, Mantua enjoyed a revival. Numerous palaces, theaters and art galleries were built in the city at the time.

The Revival of Mantua

The Gonzaga family were very fond of culture and art and were hosts to very important artists in the time like Luca Fancelli, Nicolo Sebregondi, Domenico Fetti, Pisanello, Peter Paul Rubens and Leone Battista Alberti. Several masterpieces that were created in the city have been dispersed to different parts of Italy over the years but the value of Mantua as a cultural and art center is still considered to be outstanding.

Many monuments in the city serve as an example of the patrician buildings and the unique renaissance Italian architecture. Some of the most noteworthy buildings of Mantua are as given below:

The Palazzo Te was built in 1525 based on the designs of Giulio Romano who lived in the city during his last years. The palace was designed in a mature and sophisticated renaissance style with various hints of Raphaelian manner.

The palace was built to be the summer house for Frederick II of the family of Gonzaga. Today the palace is home to the civic museum in which the donations have been made by one of the most famous publishers in Italy, Arnoldo Mondadori. Ugo Sissa had also donated a lot of art works to the museum. Ugo was an architect who worked in Iraq and had a large personal collection of typical artworks from Mesopotamia.

One of the most famous residences of the Gonzaga family was the Palazzo Ducale. The palace is a large complex which has a number of gardens, courtyards and buildings which have all been gathered around the main buildings of the complex. Castle of Saint George, Palazzo del Capitano and the Magna Domus were the most important buildings in the complex.

Sabbioneta is another town which has been included in the list of world heritage site by UNESCO along with Mantua. The town is located on the banks of River Po and is only a few kilometers away from Mantua.

The town was founded by Vespasiano I Gonzaga in the 16th century close to the Via Vitelliana on the banks of the River. He was the first Duke of the town and used it as his own personal fort. It was during this time that Sabbioneta became a small but important musical center.

Sabbioneta was built following the principles of the Renaissance Humanism of the “Ideal City”, which means it had to respect some functional and ideological principles.

In 2008 was declared a Unesco Heritage Site because it was built in only about 30 years and it’s a great example of ideal city respecting renaissance principles.

Sights of Interest in Sabbioneta

Interesting sights in Sabbioneta are the Ducal Palace (1531-91), the Teatro all’Antica (1588-90), the Jewish Quarter, the Galleria degli Antichi and Palazzo Giardino or Casino, a leisure place.