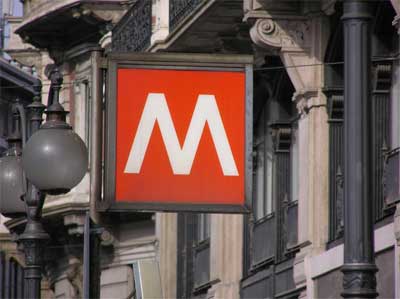 I have finally realized how shockingly average the Milanese public transport is. For a classy, chic city, the state of the trams and the metro is disgraceful. Actually, I’m inclined to lump even the buses into this lot. You’re lucky to sit down on a seat free of stains, or rubbish, or the remains of someone’s lunch. They’re never clean, and always smell slightly strange – the same stench as in a room full of people who’ve taken their shoes off. Not pleasant, at all.

You may wonder why I am only ranting and raving about this now, after living here for 18 months, but I have good reason. It’s only dawned on me in the last week just how truly awful the metro really is, because now I have a comparison. London. Good ol’ London – where the metro is newly upholstered, the trams free of dirt and grime, and artistic graffiti is a thing you pay good money to see, instead of being on all wall spaces.

I was so shocked by the beauty of the London metro; I was convinced I’d sat in first class by mistake. My seat wasn’t cracked plastic, but cushioned upholstery. And it wasn’t simply beginners luck because on every trip I did on the underground, I was seated comfortably and reached my destination with my clothes no dirtier than when I hopped on (you may laugh, but this is no mean feat in Milan).

The answer is clearly a financial one. The more money invested, the better the quality of the product, obviously. But I find it hard to believe a thriving, business-orientated city like Milan wouldn’t have a few bucks to throw towards it. Then again, you can basically ride for free here. Ok, it’s not right and shouldn’t be done, but it happens. For every 10 people that board the tram, my guess is that only one pays. Sure in law, payment is obligatory, but in practice, no.

So with a good chunk of people scamming the system and riding the trams for free, it’s little wonder the high and mighty of transport maintenance don’t have a penny to spend on improvements. They’re lacking a ‘do not pass go’ man who spends his days controlling the legitimacy of everyone’s tickets. And without a law enforcer, society is really just not that honest.

But in London, even the best con artist wouldn’t get away with anything. Apart from the physical presence of authoritative-looking men everywhere, the ticket-checking machines actually function correctly and prohibit you from entering, or leaving the metro without thorough scrutiny. There’s no way to use the same ticket twice and you’d get nowhere without a ticket at all. So the only solution is paying.

And that’s what I’m going to do from now on. I feel a little guilty about the few times I’ve snuck under the radar and had a free trip from A to B. I almost feel responsible for the poor condition of public transport here. Well, partly responsible anyway. The one million other sneaky Milanese have something to answer for too.

I live near Washington DC. Many times I had friends coming here to visit and I took them to visit D.C. using the local Metro. Many times I heard the comment “wow the cars are so nice, and so clean!” The biggest surprise, however, comes a second later: When I point out that the Washington D.C. Metro cars have a sign on their cars stating “Made in Italy”!

So if we can build Metro cars that are excellent and are exported all over the world, why can’t we have them in Italy? Why are the one’s we have in Italy maintained so poorly? Kylie is right. A bunch of money is missing due to free rides…another part of that money most probably goes to corrupt politicians so there is probably not much left. If this is happening in the industrial Milan what about the south?

I just thought of a joke:  “A bus driver in Napoli hears somebody punching a ticket: ‘cachunk’ – He stops the bus, turns around and asks “what’s that noise?”