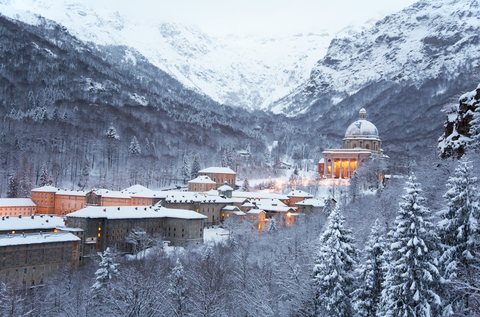 There are many stories of travelers who spend their time viewing Europe at their own speed, through hostels, hiking, biking and rail.  Keeping their own pace, rather than one of an organized tour they tend to see their experiences a little differently than others.  Many locations take on a different flair when seen through these eyes.  Many different locations are usually seen, as well, through this mode of transportation.  Italy has been seen this way, too, and its many regions present the perfect opportunity for different types of travel.

One such place that travelers have found is Biella.  It is located in the northern part of the country, in the Piedmont region, about 80 km northeast of Turin and about 80 km northwest of Milan.  A town of little less than 50,000, it lies at the foothills of the Alps.  It is an area rich in springs and lakes.  The natural area surrounding the town, including the mountains, rivers and greenery offers much in the way of attractions to anyone coming here.

Biella is the capital of the Biella province and is primarily known for its wool processing and textile center.  The city was built around this industry.  Statues of woolworkers and weavers were already starting to spring up in the 1200’s.  A silk manufacture was built in the late 17th century and in 1835 Biella was leading the technological advancements in the industry with the introduction of mechanical looms.

Biella has been called the land of sanctuaries, the most famous being Oropa.  This spot is linked to the Saint Virgin of Oropa.  Legend has it that St. Eusebius, Bishop of Vercelli in the fourth century, carried the black, wooden statue of Madonna, sculpted by St. Luke, from Jerusalem to Oropa.  Research suggests that a church was built on this site in the 13th century, with expansions built over the years to accommodate a growth in followers.

This is truly an immense structure.  It is composed of the Cloister with the Old Basilica, the New Basilica and the side structures holding more than 200 rooms.  The New Basilica houses the Black Madonna, named because of the color of the wood used to carve it.  A trip to this place is much more than a trip to an ancient church.  The grounds, the Burnell fountain, and the meditative silence you find throughout this place appeals to more than just one sense.  The walls within the sanctuary are filled with accounts of people receiving help from the Virgin Mary.  The most frequent are captured from World War II.

The Sacro Monte di Oropa is a devotional complex and is on the UNESCO World Heritage list.  Began in the early part of the 17th century it consists of many chapels.  12 of these form a devotional path where scenes from the life of the Virgin Mary are represented inside.  The detail present in each of these scenes invites each visitor in and the episodes grow until reaching paradise in chapel XV – The Crowning of Mary.

Oropa itself is about a half hour outside the city.  In addition to the structures, the area allows one to really take in the natural surroundings.  In the winter, downhill and cross country skiing takes precedence.  If you get a chance to get up nearby Mount Mucrone you can take in views of both Switzerland and France.  If you catch this area when the snow is gone, you are still in luck.  There are a variety of hiking trails that branch out from the sanctuary.  Sometimes, in the spring especially, the mountain will still have snow on one side of the mountain and not on the other.  If you dare, take a hike up the hill on the dry side and slide down on the snowy side.  Oropa also lays claim to being the first hydrotherapy center in Italy, built in 1850.

Because of its location in the Alps, the area is prime for hikes and mountain biking with varying degrees of difficulty.  It is filled with trails that are suited for the leisure seeker as well as the more adventurous.  The Giardino Botanico di Oropa, a natural preserve and botanical garden, also provides several acres of lush foliage from around the area.

Other attractions within the city are the city itself, with its winding main road, Via Italia.  The road winds around as a way of blocking the wind.  The street itself is also V shaped to help when it snowed.

In addition, the Roman Baptistery, built in the early 1000’s, and the adjacent church of Santo Stefano are two attractions to hit when in town.  Also, the Natural Reserve of Burcina and la Bessa, the outlook at Zegna, and the ski resort at Bielmonte all make this area inviting.

Not many associate Italy with golfing, however, Italy’s best golf course is located about 30 minutes from town.  Golf Club le Betulle was designed by English architect John Morrison.  The club has been used for many tournaments and is also considered one of the more prominent courses in all of Europe.

Biella is also home to the Menabrea brewery whose beer has won a few gold medals at the World Beer Championships in Chicago.  So, not only is the wine, of course, magnificent here, but the beer isn’t bad either.

Not many have heard of Biella, and may mistake it for the term “bella”.  It is beautiful and if you are looking for a location that is short on tourists, but full of mountain views, ancient discoveries, and beautiful landscapes, then Biella is the place to be.