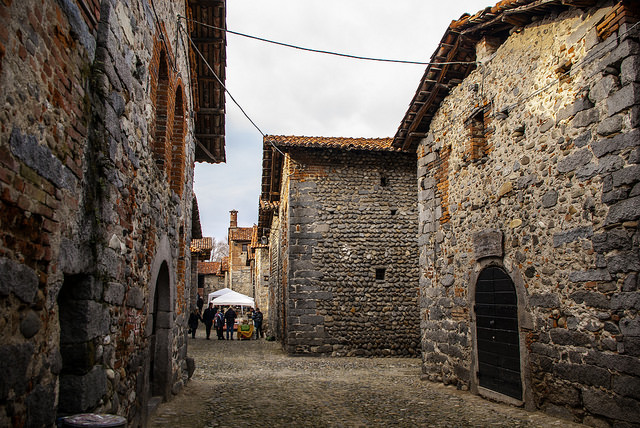 Candelo is a small comune and town located in the Piedmont region of Italy in the province of Biella. The town is located close to Turin and Biella and does not attract many tourists. Due to its medieval nature and its village like atmosphere it has become a center for agritourism in the recent years. It’s a member of the “Borghi più belli d’Italia” club, the most beautiful villages of Italy.

Many people who want to experience the lifestyle of a real Italian village come to Candelo to enjoy its laid back atmosphere and its natural beauty. The town is spread over an area of 15 sq km and has a population of close to 7500. The ancient houses and the picturesque streets of Candelo are the main attractions of the town.

Ricetto di Candelo is the most interesting place to visit in Candelo. This medieval master piece is the most visited place in the town. The ancient fortification of the town is actually a large complex within which several different attractions are located. The fortifications were initially built during the medieval times and have been renovated a few times; however, much of the original façade still remains and the walls are still standing strong. Within the complex is a public cellar, the fort itself, the ancient walls and some towers. Though most of the towers have been destroyed over the years, a few are still standing.

The commune of Candelo is also home to large wooded lands, Baraggia being one of them. The immense 500 hector area is rich in flora and fauna and geological features. The land itself is not cultivable, it is muddy and rocky. The region is home to many species of wild life and exotic plants and trees that are typical to this region. Baraggia offers panoramic views of the lush landscape and the surrounding mountains.

The Ricetto museum is one of the most important museums to visit in Candelo. Though there are four to five different museums in town, the Ricetto remains the most important. The museum showcases the history of the monument, its architectural features and the history of the town. The museum organizes several cultural events and seminars for the locals as well as tourists throughout the year to increase awareness about the medieval structure.

The cellular museum in Candelo is quite interesting since it showcases the art of wine making. The museum is located in the Ricetto public cellar and showcases the instruments, tools and technology that have been used since ancient times for making local wines. The museum is particularly interesting for wine lovers and those who want to know more about the local wines of Piedmont. The region is known for its various vineyards and its red wine.

Between April and May Candelo hosts a flowers festival, “Candelo in Fiore”, where the garden is valued like a piece of art.

In July there’s a beer festival, Birrincontro, with artesanal beers and local produce, a great way to discover the territory.

September has “Vinincontro” as its main event: not only wine, but also food, music and shows, a display of the local treasures.

Candelo is located quite close to Turin and Biella but there aren’t many transport facilities in the area. The easiest way to reach the town is by buses. The state buses operating in the region depart every few hours for Candelo from the bus stations in Turin, Biella and from the other smaller towns and villages in the region. Those who have their own cars can just as easily drive down to town.

The best way to explore Candelo is on foot. Since the town is quite small most visitors prefer to walk around to explore the few attractions that are located here. Visitors who have their own cars can also drive. The streets in Candelo are not congested with traffic so driving is not a problem. Parking spots are easily available and since the streets are not too crowded, walking around is quite enjoyable. Some of the streets in the older section of the town are very narrow so navigating cars can be a little difficult.

Candelo is quite a small town and it does not attract many tourists. For this reason, there are only a few accommodation options in town. Because of the rise in agritourism in the last few years, quite a lot of country homes, farm houses and vineyards are now offering rooms on rent to visitors. There are also a few small bed & breakfasts in town where visitors can get comfortable and clean rooms. Some of the best hotels in Candelo are Agriturismo Tenuta La Mandria, Al Gallo di Ricetto, Cascina Tollegna and B&B Il Gomitolo. Most agritourism accommodation facilities are quite good because they allow visitors to experience country living.

Candelo has some good restaurants and pizzerias where visitors can eat. Most of the restaurants in town are small and family run establishments. The cuisine is traditional Italian and the dishes are simple and wholesome. Some of the best restaurants in Candelo are Ristorante La Taverna del Ricetto, Trattoria Cantina antica, Ristorante pizzeria Mirage, Da Sabrina, Trattoria D’Oria and II Torchio.