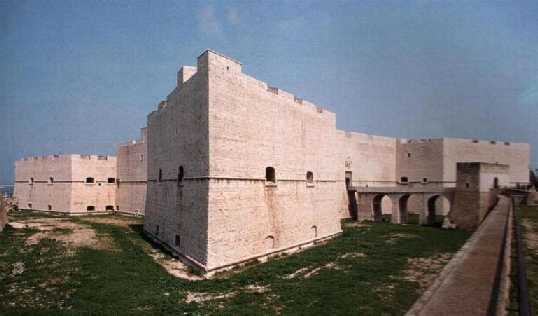 The sea presents an extra special experience.  The sight of it, the sound of it and the smell of it totally engrosses every bit of you whenever you encounter it.  There is much to see in the natural world that leaves you totally overwhelmed, but somehow the sea captivates you even more.  Couple that image with the fact that you are in Italy and it magnifies the experience exponentially.  That is why, whenever you get the chance, take in a sea side city when you are in this beautiful country.  Barletta is one such city.

Barletta is located in the northern part of the Puglia region, right on the Adriatic coast.  Puglia is in southern Italy.  The 93,000 inhabitants occupy a city that just began as the government seat of the new Province of Barletta-Andria-Trani.  Situated between Foggia and Bari, the busy port locale offers both old and new to any visitor.

Many travelling in the Puglia region use Barletta as not only a place to stay but also as a central point to explore the region.  This area is dominated by the coastal, traditional Mediterranean climate, with moderate temperatures and rain primarily only seen in the late fall and winter.  So, many come to enjoy both the coast and the many attractions of old world Barletta.  But, do not let the coastline pull you in entirely.  The fertile plain of Tavoliere begins in and around Barletta and provides wonderful landscapes to explore further inland.

In the middle ages, as with a few other coastal Italian cities, this port city was a starting point for many crusaders.  The Angevines kings of Naples provided the city with, perhaps, its greatest shining period of glory.  Later on, in the 16th century, during the war between the French and the Spanish, the city was the site of a historical victory of a small group of Italian knights over the French challengers, in what became known as the disfida di Barletta (“challenge of Barletta”).  The city has always been held in great importance, illustrated by the fact that it was the capital of its district from 1806 to 1927 and is also now capital of the new province now.  Later it served as a fortress for the Spanish rulers of southern Italy.

As with most of the region of the Mezzogiorno, this area was very poor for much of the19th and early 20th centuries.  The term Mezzogiorno, which literally means “midday”, is commonly used when referring to the southern part of the country along with Sicily.  Loosely, it would entail the present day regions of Balicata, Calabria, Campania, Puglia, Molise and sometimes Abruzzo, as well as Sicily and Sardinia.

With the poor conditions that prevailed during this time, the city and area were besieged by various bouts of disease.  Tuberculosis, pneumonia, small pox malaria and the like were prevalent during this period.  Cholera outbreaks were common as well, taking place at various times during the 1800’s and early 1900’s.  The worst of these incidents occurred in 1910, when bacillus killed tens of thousands in southern Italy.

However, as time went on, but especially after World War II, the city began to capitalize on its history, its coastline and its wonderful heritage.  Speaking of World War II, the city won the Gold Medal of Military Valor and of Civil Merit as being one of the first areas of German resistance within the country.

The historic center of town provides one with many glimpses into its past.  One of Barletta’s most famous pieces of historic art is the Colossus of Barletta.  It is a huge Bronze statue of an unknown figure.  Some say it is of Roman Emperor Theodosius II, but it is not certain.  It’s presence dominates the town and the Cathedral next to it.  There is also some lore and legend as to how it got to its present location.  Some say it was excavated during the work commissioned by Frederick II in the 1200’s.  Others say that it was washed ashore during a shipwreck where only the head and torso survived only to be made whole by local artisans.  Still other stories claim that at some point the local Dominicans in the 14th century used the arms and legs to cast bells, and the statue was formed whole again in the 16th century.  Whatever the most accurate story is, it still presents an imposing figure on the city.

The area of Barletta also is the site of the Canne della Battaglia, which is the location of the famous battle, led by Hannibal, between the Romans and Carthaginians.  The outnumbered Carthaginians gave the vastly superior Roman army an embarrassing defeat in 216 B.C. during the Punic Wars.  There are still remains here of the ancient Roman town.

The Hohenstaufen Castle is also an important architectural structure linking Barletta to its place in history.  It dates back to the 10th century and was a staging point for soldiers leaving for the Holy Land during part of the Crusades.  Frederick II enlarged it in the 1200’s.  Charles enlarged it again in the 1500’s.  It was completely restored in 1996.  Now it is home to the Civic Museum, which includes a library and a statue of Frederick II.

The Basilica of San Sepolcro, built in the 12th century, is another connecting point site with the Crusades.  Its façade is traditional Baroque, but is built with a direct influence from Jerusalem, mainly because it was used for soldiers coming back from the Crusades who used the church and the adjoining hospital.

A good example of how buildings superseded other structures historically can be found at the site of the Cathedral of Santa Maria Maggiore.  The interior housed groticella tombs dating back to the third century BC.  There is the Palaechristian basilica, built in the 6th century, over it, which was also the site of another basilica, built in the 9th century, over that.  Another new building was erected in the mid 1200’s and was then refurbished in the 14th century.  As you can see, the Cathedral houses many stories of the past.

Easily accessible by train or car, Barletta sets a great example of Italy to those who come here.  Whether you stay at one of its charming bed and breakfast spots or one of its other hotels, you are usually not too far away from its magnificent beaches or a walk through its medieval, historic center.  Either way you will have the people welcoming and your experience first rate.